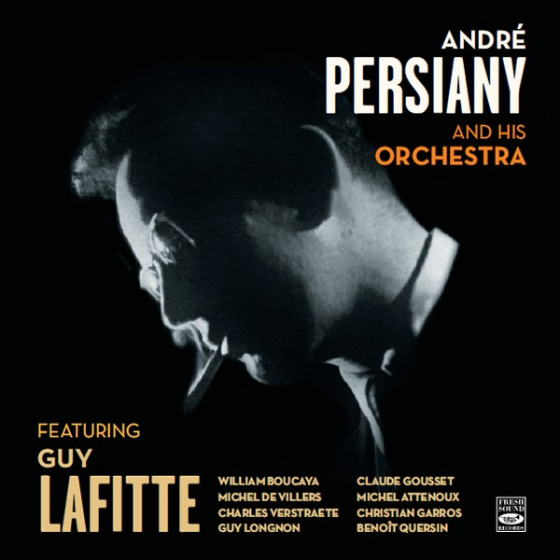 André Persiany has long been one of the favorite pianists among fans of French jazz. Inspired at first by Milt Buckner’s block chords, “Pépé” (as he was known among friends and fans) forged his own recognizable style. A true swingman, he played with a strong and unrestrained flow that was especially prominent when it came to blues.

Despite his young age, "Pépé" was already an accomplished composer and arranger when in 1954 he assembled the nine-piece unit to record the first album of this CD release. For this initial session, Persiany chose a program alternating fast with slow numbers. Only in the first case is the orchestra as a whole used extensively—featuring solos by all the band members, while on the ballads his longtime fellow, the full toned tenor saxophonist Guy Lafitte shines and plays with warmth and delicacy. After this first album, in 1955, Persiany came up with a new and larger band—with three tunes having the frightening vigor propelled by the percussion of Fats Sadi on bongos. The ensemble plays with consistency, poignance, power and swing comparable to their American counterparts.

In 1958, another particularly noteworthy moment in Pépé’s career took place, when he organized a complete big band to play the music of his most admired idol: Count Basie. But, the project was not a cliché purveyor, or a copy. Instead it was a buoyant set of sagely-constructed new arrangements conceived from Persiany’s viewpoint and approach, displayed by the clean and full bodied brass and sax sections. Behind them, the whole rhythm team drives away with nary a letup.

"Apart from the admirable Kenny Baker’s Dozen there was no British equivalent to Persiany in the 50s. He was a gifted pianist and arranger, and he led bands where the musicians were fluent and accomplished. His groups were well-rehearsed and so the leader’s charts, imaginative and inventive, succeed well.

The first track shows off a handful of soloists to good effect. The fiery Longon was on leave from Claude Luter’s band and Benny Vasseur had already achieved an eloquence more American than Gallic. Lafitte, not featured as much as you might expect, gets his first display when he digs in, Hawk-like, to Blue Organ. Guy was a most consistent tenorist with a ravishing tone, and he presumably remained so until his early demise at 71. Boucaya is full of bright ideas, and his feature on Lover Come Back is a great introduction to his playing.

André’s writing for the saxes is delicious, as you’ll find on Halbe, Finnts and T-Bone, a sonorous feature for Vasseur. Lafitte does indeed donne la chaude sonoritè (all relevant liner notes are in French) to Christmas Song and gives it a relevance unusual to the Christmas tree and baubles image. Saxes are rampant on Finnts, with de Villers announcing himself as a baritone giant. Longon’s Mamoune is a reflective ballad showing he wasn’t hide-bound by French trad (the sax writing is so good I suspect it was by André.

The (2) band is even better, with Beer Barrel wielding a hefty poke and exemplary bass playing by Quersin behind the leader’s Buckner outing. Although he’s only listed on baritone, I suspect it is the gifted de Villers playing the alto feature on Little Story. He’s back on baritone to split Twelve Bars with an abrasively hostile Lafitte.

The final seven tracks is a batch of Basie, re-conceived by Persiany, with the muscle of an unusually large battalion and his fine arranging skill. Blue And Sentimental has a good alto solo from Attenoux, more familiar for his Bechet-like soprano, and a melodic piano solo before a fascinating conversation between the sections. Attenoux takes it out with some graceful inventions. He also precedes de Villers with more commanding alto on Jive At Five.

André emigrated to New York soon after these sessions, and stayed there for the best part of a decade. He died on 2 January 2004."

"Pianist André Persiany had a rich and warm touch on the ivories, and while he was usually featured in a small group settings, these two collections of big band charts is a nice alternative. There is a six song tribute to Count Basie in a 1958 session, and the sax section sways to a hip “Shorty George” and “Jive at Five” with some nice work by LaFitte on “Topsy” and a melancholy “Blue and Sentimental.” A nine piece unit from 1954-1955 has a rambunctious and reedy “Halbe Funf”, “Just For Fun”  and “Lover Come Back to Me” with Persiany pulling out the organ for a smoky “Blue Organ” that doesn’t let go. Lafitte is as warm as an autumn sunset on “Little Story” as well. The liner notes are filled with bon mots; did this guy ever come to the States? We sure missed something!"