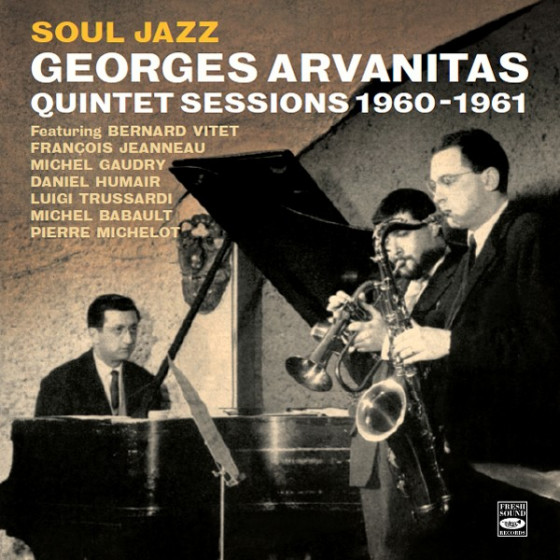 Despite its short history, the 1960-1961 Georges Arvanitas Quintet has remained one of the best examples of a specially vibrant and fruitful moment in the history of French jazz. Not unlike many other groups back then, the Quintet was originally associated with the “soul” style—that successful blend of “bebop” and “funk” launched by the Cannonball Adderley Quintet. Still, they made an effort to disassociate their performances from the soul clichés by retaining a “hard bop” approach that evolved into a more personal style.

His young lions were one of the keys of its success. Bernard Vitet had attained remarkable mastery of the flugelhorn. His sonority obviously evoked Miles, but also Clark Terry. Francois Jeanneau had also grown an extraordinary deal in a short time. You could still hear the Coltrane influence, but his fleshy tenor sound brought something new to the table and is an attractive companion to Vitet’s full tone. Georges Arvanitas was the mainstay of the quintet. It was on him that the unity of the group rested, and from the start to the finish, is the personification of selfassurance, and unabated swing. The rhythm section was consistently supportive and cohesive. There is talent, passion and great vitality in the Georges Arvanitas Quintet and this CD gathers its few but valuable recordings.

"The progression of European jazz musicians radically ascended from the days that Louis Armstrong and Coleman Hawkins originally came to France and these 50s & 60s sessions of home grown artists sounded more authoritative than imitative. You’re going to be pleasantly surprised by this reissue.

The 1950s-60s was the high water mark for hard bop quintets, and pianist Georges Arvanitas lead one that was on a par with anything that Horace Silver or Art Blakey could put together at the same time. The team of Arvanitas with Bernard Vitet/fh, Francois Jeanneau/ts, Hichel Gaudry/b and Daniel Humair/dr had a feel similar to the Clifford Brown/Max Roach team of the 50s, with a deep dept to the composers of the proto-bop era like Monk and Powell. Vitet’s sweet horn is a perfect natural foil to Jeanneau’s low fat tenor on the soulful “This Here” and joyful “Bouncin’ With Bud” and Arvanitas is in a Bud Powell mood as he torridly tears through “Un Poco Loco” and “Bohemia After Dark.” Jeanneau does a nice aria on “Sonnymoon for Two” and “Monk’s Mood” with the rhythm team careening off the walls on “Bemsha Swing.” Pierre Michelot steps into the bass chair and leads the team on some left of cener moods as on Eric Dolphy’s “245” and Marital Solal’s “Extrait de Suite No 1” showing that these guys go hit from either side of the plate. This one’s a keeper!

The session notes and liner notes of this release gives wonderful information regarding the artist himself but the milieu of jazz back in the days of De Gaulle."