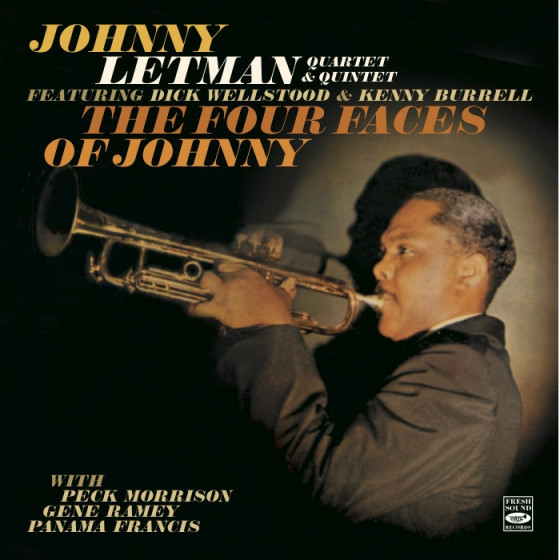 Johnny Letman (1917-1992) was a trumpeter and singer in the traditional- mainstream vein, who had been on the scene for quite a long time, playing with such bandleaders as Lucky Millinder and Cab Calloway, before rising to prominence in the late 50s. But his lack of recognition (on records, at least) had not been—like the fate of some other mainstreamers—a matter of simply being forgotten. Letman never was known to any extent until 1958, when he started working out of the Metropole in New York City.

His big, fat, walloping trumpet style drew from the Louis Armstrong-Roy Eldridge line, whereas his attack ranged from the crisply crackling to the exuberantly flamboyant. The high quality of this set is established by the outgoing musical personalities of Letman and pianist Dick Wellstood, as well as by guitarist Kenny Burrell’s willingness and ability to match their extroversion note for note.

"On the face of it this modest little mainstream album doesn’t have classic status, but I was so beguiled by it that I couldn’t resist the four stars. I was immediately roped in with the opening Mabel’s Dream, a rarely used King Oliver tune from the dawn of jazz, and the addition of that timeless jazz musician Kenny Burrell to interpret it had me completely hooked. Dick Wellstood is on top form throughout both these sessions.

Letman’s work was unfamiliar to me until this disc arrived. He seems to have been with a multitude of name bands at the wrong time, and never secured his grasp on the renown he might have expected and certainly deserved. His hard work and suffering led him to be a mainstream trumpeter to rank alongside Roy Eldridge, Buck Clayton, Shavers and the whole catalogue of sub-Louis players. We are guilty of neglect and acquiring this album will go some way to correcting that!
Advertisement

Starting with Nat Cole’s big band in 1933, he played in those of Horace Henderson, Lucky Millinder, Cab Calloway, Count Basie and a multitude of others without being noticed. It seems to have been Albert McCarthy who, in 1958, first paid him any attention. By then he had, like many mainstreamers, compromised in commercial Dixieland bands at well-trodden haunts like The Metropole.

Johnny has a wide range and turns out to be a fine blues player, exemplified by The Four Faces where he shows his influences, notably high-register Louis and Hot Lips Page with growl trumpet that is more agile than Lips was. The bravura eight-minute performance shows how eloquent Letman is, and also harbours a moving Wellstood performance. He sings good jazz on five tracks, including the unlikely Goodnight Irene. His vocals swing, but he hasn’t got a particularly pleasant voice. Irene is brutally awakened with breath-taking declamatory trumpet.

Kenny Burrell is infallible, and contributes mightily to the conversations on the first session. Like Letman and Wellstood he is a man of flowing improvisations, and you’ll be beguiled at once by Mabel and her dream.

I can’t fault this album and urgently recommend it to mainstreamers. How did we ever miss these tracks when they first came out?"

"Even experts on jazz history may not be that acquainted with Johnny Letman (1917-1992). An excellent swing trumpeter who also had a bit of New Orleans in his style, he worked with many big bands in the 1930s, ‘40s and ‘50s including those of Horace Henderson, Lucky Millinder, Cab Calloway and Count Basie (1951). In later years he played with such notables as Stuff Smith, Chubby Jackson, Wilbur DeParis, Claude Hopkins, Eddie Condon, Lionel Hampton and, Earl Hines. But despite his abilities, Letman never achieved much fame.

Other than recording enough material to fill up two albums on two days in 1968 with a quintet that included guitarist Tiny Grimes and tenor-saxophonist Hal Singer, Letman only led 1 1/2  albums in his career, all of which is included on the single CD The Four Faces Of Johnny. Four titles from 1959 are from a Various Artists album with Letman leading a quartet that also includes pianist Dick Wellstood, bassist Gene Ramey and drummer Panama Francis. Most of the CD is comprised of the 1960 album The Many Angles Of Johnny Letman, a quintet date with Wellstood, Francis, guitarist Kenny Burrell, and bassist Peck Morrison.

The first two numbers from the latter, an inspired transformation of the King Oliver-associated “Mabel’s Dream” into a medium-slow swing piece and Wellstood’s “Tina,” has Letman sounding remarkably similar to Roy Eldridge, really capturing his crackling sound and competitive style. Letman, who also takes five good-time vocals (including “This Time The Drinks On Me”), shows more individuality on the other numbers, none of which are warhorses. He holds his own with the always-brilliant Wellstood and Burrell, and shows throughout this release that he deserves to be rediscovered."

"Just when you think that there are no other trumpeters from the Swing Era to discover, here comes Fresh Sound Records with a guy I’ve never heard before, but definitely deserves your attention.

Johnny Letman (1917-1992) has both a horn and vocal sound reminiscent of Duke Ellington’s Ray Nance, warm, upbeat and swinging. He was a sideman for big bands such as Cab Calloway and Lucky Millinder, but before drifting off into obscurity he recorded a pair of hip sessions in 59-60, and they include such guys as Kenny Burrell/g, Neo-trad Dick Wellstood/p, Gene Ramey/b and Panama Francies/dr. The album here is a hoot!

The 1959 quartet session without Burrell has the team stretch out for 8 minutes on a richly noir “The Four Faces Of Johnny” while his horn bops to “Tasty”. His voice is jivey on a pair of R&Bish pieces as Wellstood boogies on “Goodnight Irene” and Francis applies a big beat to “Oh, How I Miss You Tonight”. The next year his horn is muted on the boppy  “Tina”, growling with the  plunger on “Moanin’ Low” (with some nice work by Burrell) and sounding as bold as Roy Eldridge on the extroverted “Say Si Si”. Burrell is delightful on “Sittin’ Alone Countin’ My Stars” and is cool with Wellstood as they nimbly support Letman on vocals during “This Time The Drink’s On Me”. Upbeat and right down the center of the mainstream. You’ll like this guy if you’re a fan of vintage horn and vocals, and if you’re not, why not?"