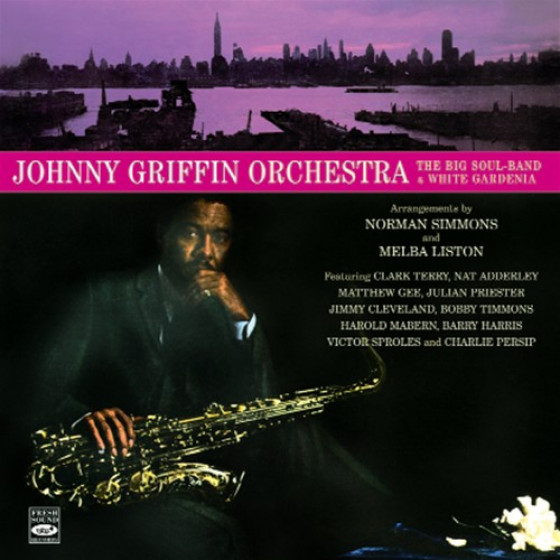 The startling and formidably large sound in The Big Soul Band led by Johnny Griffin and featuring arrangements by Norman Simmonsopened a new soul trend among the medium-sized recording units that had become popular in 1960. Simmons combined earthy new tunes and old spirituals, and Griffin, as the main soloist, plays with his customary swaggering groove and all-encompassing fervour. And there are fine solos by Clark Terry, Bobby Timmons, Matthew Gee, and Victor Sproles to add to the flavour.

The second album, White Gardenia, is Griffins tribute to Billie Holiday. Reflecting the melancholy side of Lady Days repertoire, the arrangements by Melba Liston and Simmons are appropriately dark-hued and brooding. Nevertheless, the blending of a warm toned string section (cellos and violas) with the horns provides a setting that allows Griffin to reveal a more relaxed and pensive aspect of a musical personality renowned for his ability to deliver the kind of blistering, tear-the-door-down tenor that was his stock in trade.

Personnel on "The Big Soul-Band":

Trumpet solo on #12 by Nat Adderley; on #15 by Clark Terry; trombone solo on #16 by Jimmy Cleveland. All piano solos by Barry Harris.

"Tenor-saxophonist Johnny Griffin is showcased with a ten-piece group on this CD reissue [...] The repertoire is a bit unusual with some spirituals (including "Nobody Knows the Trouble I've Seen" and "Deep River"), a tune apiece by Bobby Timmons ("So Tired") and Junior Mance, and three originals from Norman Simmons who arranged all of the selections. Trumpeter Clark Terry and trombonists Matthew Gee and Julian Priester have some short solos but the emphasis is on the leader who is in typically spirited and passionate form."

"Tenor saxophonist Johnny Griffin pays tribute to Billie Holiday, who had died exactly two years earlier, on this ballad-oriented set. Griffin is joined by a brass section (either five or seven pieces), plus a rhythm section and strings (the latter dominated by cellos), for his warm interpretations of nine songs associated with Billie Holiday, plus his original "White Gardenia." The arrangements, provided by Melba Liston and Norman Simmons, are tasteful, and the lyrical music is well-performed, if not overly memorable. Worth checking out."