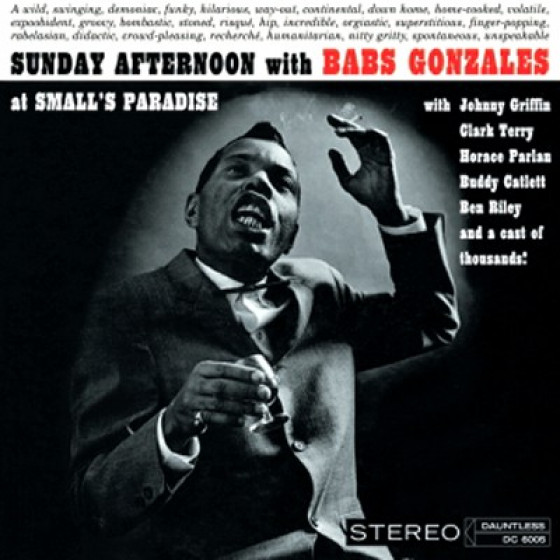 "Let me tell you a little about Babs.... He is one of the truly original spirits in jazz. The vocal group he organized in the late Forties, Bab's Three Bips and a Bop, was the application to singing of the principles of modern jazz delineated by Charlie Parker and Dizzy Gillespie. The few discs they made (all Blue Note 78 rpms) remain among the very best examples of vocal jazz groups. When you listen to them now, you know from whence came a good deal of the more publicized sounds of Jackie and Roy, the Hi-Lo's and other groups.

Babs was an experimenter, too, in the writing of words to jazz solos, a technique later picked up and made famous by Lambert- Hendricks-Ross and others. The version of "Stompin' at the Savoy" that Babs' Three Bips and a Bop did way back then is a gas today. So is that folk song of modern jazz, "Them Dues Blues" (If you want the things you choose, Jack, you gotta pay them dues")...

He does his own jazz lyrics to jazz standards like "The Preacher," "Night In Tunisia" and "Moody's Mood for Love" (called "Le Moody Mood Pour Amour," herein). He preaches a hipster philosophy in a combination of jazz and poetry and talking blues in numbers like "Dem Jive New York People" and "Keep You An Ugly Woman." He introduces his numbers and his musicians in French and Swedish, and in general carries on wherever he is as if he owned the joint. Babs is the sort of person who meets everybody who comes to the club, knows everybody in his hotel, and is a personal friend of everyone on the block he lives in. I once sent a letter to him in New York with the right street number but addressed merely to "Mon-sieur BeBop." You know it got to him? "I knew the postman," Babs says. I'll bet he did."