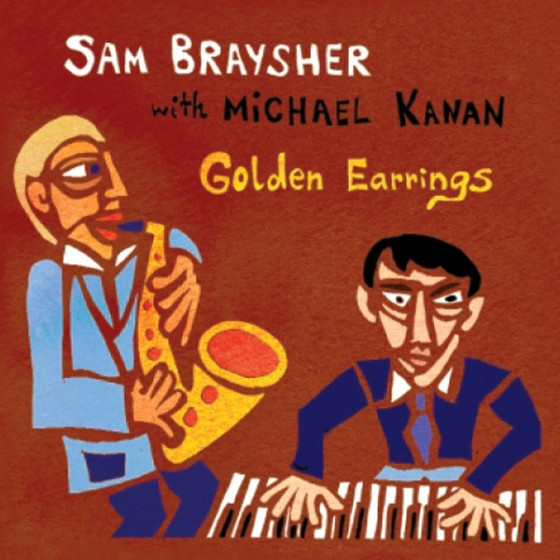 "On Golden Earrings, Altoist Sam Braysher and pianist Michael Kanan
perform a set of duets, swinging and digging tastefully into superior standards and
obscurities. Braysher, who is based in London, was 27 at the time of this 2016
recording. He has a beautiful tone that is sometimes a little reminiscent of Paul
Desmond while his approach to these songs is often boppish in a fresh way. Kanan, who is from Boston, studied with former Lennie Tristano students Harvey Diamond and Sal Mosca and has worked with many top artists including Kurt Rosenwinkel, Mark Turner, Jimmy Scott, and Jane Monheit.

The music swings from the start with a medium-tempo “Dancing In The Dark.” While Braysher takes the lead, Kanan is not only a very alert accompanist but consistently offers a second equal voice. The repertoire also includes such delights as Charlie Parker’s “Cardboard,” a three-song Irving Berlin waltz medley, Tadd Dameron’s underrated “The Scene Is Clean,” and an advanced and little-known Nat King Cole composition “Beautiful Moons Ago.” “BSP” is “Love For Sale” as Lee Konitz and Lennie Tristano might have played it, and it is gratifying to hear the beautiful “Golden Earrings” interpreted with such obvious affection. The memorable program closes with an all-too-brief “Way Down Yonder In New Orleans” that climaxes with the duo playing Lester Young’s recorded solo."

"Mostly these days aspiring jazz musicians hear the songs of the American Songbook as "jazz standards," their melodies taken as jumping-off points for improvisational flights of fancy that move the tunes far beyond their earlier incarnations as pop tunes or Broadway showstoppers. It's a distinction that the young English altoist Sam Braysher makes in the liner notes to his debut album Golden Earrings, recorded in collaboration with pianist Michael Kanan. The duo also took note of it when preparing to record this album, going back to the original recordings, learning the original lyrics and consulting the sheet music for the compositions to be found here.

Braysher and Kanan's approach results in a fresh approach to some old favourites and a welcome revisiting of some lesser-known pieces from composers such as Tadd Dameron, Duke Ellington and Jerome Kern. The tunes are stripped back to their essentials, melodies and counter-melodies are played sensitively—swinging, but unshowy.

The best-known tunes are Dietz and Schwartz's "Dancing In The Dark" and the Irving Berlin medley of "What'll I Do," "Always" and "Remember." On the Dietz and Schwartz number Kanan plays the melody while Braysher adds a counter melody based on the orchestral arrangement from the 1953 movie The Band Wagon. Kanan plays "Always" solo—a restrained and affecting performance."

"Michael Kanan, who is equally grounded in the broad range of jazz traditions, joins Braysher for an examination of mostly standards plus Charlie Parker’s “Cardboard,” Tadd Dameron’s “The Scene Is Clean,” and a Braysher original, “BSP.”

They are both students of the Great American Songbook, so they bring to their jazz interpretations an understanding of the origins of the standards that they ruminate about on the album. Both are sensitive players who opt for understatement rather than bravado. Their playing on a medley of Irving Berlin Waltzes, “What’ll I Do,” “Always” and “Remember,” is touching and easy to embrace. Braysher’s “BSP” is a lively invention that gets your toe tapping gleefully. This is a thoroughly satisfying debut as a leader for Braysher.

Successfully playing in a duo format is one of the most demanding challenges for a jazz player, and Braysher shows that his has already matured to a point where he is at ease in this format. Kanan is a perfect partner, a pianist who has been on the scene for a while, and who, as an accomplished accompanist for vocalists, is at ease in supporting Braysher, while equally creative when taking the spotlight.

Sam Braysher is a wonderful example of the new players that Jordi Pujol has
been featuring on his Fresh Sound New Talent series."

"Established in 1983 and not content with reissuing historical jazz records, the Barcelona- based company Fresh Sound started taking an interest in contemporary artists via its New Talent label which launched around 1992. This offshoot numbered amongst its alumni such names as Brad Mehldau, Kurt Rosenwinkel, Robert Glasper and Chris Cheek. Twenty something London-based saxophonist Sam Braysher, one of its newest talents, now joins this august contingent.

With the exception of Braysher’s own composition BSP, a contrafact based on the chord sequence to Cole Porter’s Love For Sale, this debut album comprises standards, mostly derived from the Great American Songbook. As if to reflect the content of the music, the recording was achieved without the benefit of new-fangled edits so effectively was “live” with just three microphones and no headphones. Braysher however was fortunate in his choice of accompanist, the talented Brooklyn-based Michael Kanan, whose day job is accompanist and arranger for Jane Monheit.

In the CD sleeve notes Braysher reveals that he was immersed in this music from listening to and playing jazz rather than growing up with it as pop music of the time, but his fascination in these seemingly timeless songs has burgeoned and he uses the tunes as a springboard for extemporisation and interpretation rather than to revisit older jazz versions. Charlie Parker’s Cardboard is emboldened by the duo playing the sprightly melody in unison and Irving Berlin’s What’ll I Do is rather affecting. Kanan plays in disciplined yet fluid fashion adding a vital rhythmic and melodic base to the numbers, whilst Braysher improvises with imagination and delicateness as typified by his playing on Victor Young’s title track."

"The American songbook has been given such a going-over by generations of jazz musicians that the songs themselves are often scarcely recognisable today. Braysher, a young British alto saxophonist, goes back to some original song sheets and tackles them afresh, along with a few venerable jazz standards. The results, played in his airy, vibrato-less tone, are both delightful and surprising. His partner in this venture is American pianist and song expert Michael Kanan. Together, they rediscover the pristine elegance of both melody and harmony in pieces by Jerome Kern, Irving Berlin and Nat King Cole, among others, and bring them to light through their own sensitive improvisations.

"The duo format is becoming ever increasingly popular with both players and club owners although not always with the listener. In these times of austerity, two musicians cost less than 3, 4 or 5 which appeals to the person behind the till. For the musicians, duos need minimal, if any, rehearsals or special arrangements. Newcastle's Jazz Café was one of the first in the area to adopt this policy and, most of the time it worked although sometimes it didn't and it had to be a pairing of the regions finest to hold the attention of the Friday night crowd.

On the evidence of this album, I think Braysher and Kanan may have managed it. Unfortunately, their itinerary indicates that their tour stops short in Leeds before turning tail and heading back down south (if it's any consolation they aren't doing Clitheroe either!).

Both musicians are new to me. Braysher graduated from Guildhall where he was an Artist Fellow and a Chartered Surveyors' Prize winner. His cv includes gigs with Jorge Rossy, Barry Green, Pete Hurt, John Warren's Nonet and the London Jazz Orchestra. His co-pilot here is leading New York pianist Michael Kanan and the album was recorded last year in Brooklyn for the Barcelona based Fresh Sound New Talent label.

Braysher's tone is similar to early Lee Konitz perhaps even lighter if that were possible. He floats in an ethereal sort of way. He's a dancer more akin to the ballet than, say, a Broadway hoofer. Kanan's also a Dancing Dan his lines weaving and entwining with his musical soulmate. Not surprisingly, given the Konitz vein, Lennie Tristano isn't far away - George Wallington too. Contrapuntal, Bach on 52nd St. Bird's Cardboard has both men 'blowing' out and out bebop unison lines playing the complex head as one.

"Gentlemen, take your partners for the next waltz" the MC or the bandleader commands and the males escort the lady of their choice on to the dance floor where the band might play an Irving Berlin Waltz Medley which is exactly what happens here - an Irving Berlin Waltz Medley comprising; What'll I Do, Always and Remember. It's quite delightful although I'm not sure if Victor Sylvester would have approved.

With the exception of an original by Braysher (BSP), a piece by Duke and another by Tadd Dameron the bulk of the material, like so much classic jazz, is from the GASbook. Braysher and Kanan tried not to be influenced by previous jazz versions preferring to study the sheet music and popular recordings of the songs in an attempt, he says, to get into the composer's mind.

Dancing in the Dark; Cardboard; Berlin Medley; BSP; All Too Soon; In Love in Vain (Kern & Robin from Film Centennial Summer); The Scene is Clean (Dameron); Beautiful Moons Ago (Nat Cole); Golden Earrings; Way Down Yonder in New Orleans. This latter piece, Braysher says, contains a harmonic surprise towards the end. Must listen to it more carefully next time I visit one of the Trad watering holes. Braysher and Kanan provide a surprise of their own by playing, in unison, Lester Young's 1938 solo on the Kansas City Six's version of the same tune. Recommended!"