Home  /  Megumi Yonezawa  /  A Result of the Colors 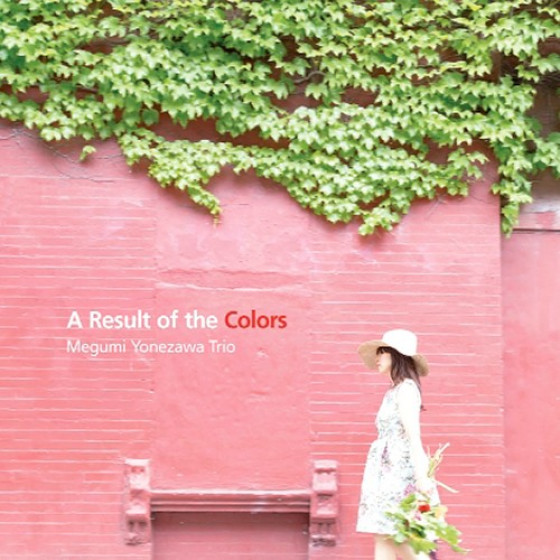 A Result of the Colors

Chosen by JazzTimes as their Favorite "Debut Album" of 2016

"It’s been many years since I chose piano as my instrument which has given me so much joy. I am strongly and deeply charmed by its beauty.

This music is based on my long term musical exploration which was influenced by Greg Osby, Jason Moran, Andrew Hill, Keith Jarrett, Ray Santisi, Arnold Schoenberg, Alban Berg, Johann Sebastian Bach among many others.

Also, I would like to thank John and Eric for their musicality and dedication to their art."

All music is composed by Megumi Yonezawa, except #6 by Don Meyer, Elsie Bretton and Sherman Edwards

"Megumi Yonezawa was born in Hokkaido, Japan, and graduated from Berklee School of Music where she earned her Bachelor of Arts in Piano Performance and Jazz Composition. She has proven herself on recordings by vibraphonist Michael Pinto, violinist Meg Okura, trumpet master Nicholas Payton and alto sax great Greg Osby, and playing—along the way—with drummer Francisco Mela and bassists Chris Tordini and Ben Williams.

Now Megumi has released her debut album A Result of the Colors (Fresh Sound New Talent FSNT504). Joining her are bassist John Herbert and drummer Eric McPherson on this, her debut album as a leader. Megumi has written all of the songs on the album with the sole exception of For Heaven’s Sake.

The album opens with the title track, A Result of the Colors. The piano and bass introduce the piece. With her credentials, there can be no doubt that Megumi will meet any expectation as far as performance goes. What was left to examine was her writing and arranging abilities. That, too, met and exceeded all expectations.

In the trio format, and with two exceptional band mates, Megumi is able to express herself completely and to maximize the impact of her artistry. Her phrasing is excellent and her touch is precise.

Herbert’s bass solo is finely wrought and also has a deep emotional impact. When the piano returns atop the bass, the results are stirring. So very well-written and brilliantly performed.

Children of the Sun is a lively work with a bouncy introduction. Herbert and McPherson carve out a cool groove and Megumi works off of it smartly. I found myself smiling broadly at her enchanting delivery of the piece she herself crafted so well. She has moments like Keith Jarrett and that influence is enough to win me over completely.

Herbert and McPherson work in tandem flawlessly and truly flesh out Megumi’s vision of the music.

The third track is titled Untitled. The bass and drums work on something lyrical beneath the piano’s melodic lines. Then the piano and bass answer each other softly in a quiet dialogue between them. It is another example of Megumi’s excellent writing talents.

Dr. Jeckyll and Mr. Hyde opens with a menacing, albeit alternating, melodic suggestion that is taken up by bass and drums. There is clear division within the strident motifs. The piano and bass are at odds and the drums keeps up the rhythm until the abrupt—and fitting—full stop.

Sketch has a haunting quality that is irresistible. Herbert’s bass lines run in opposite directions from Megumi’s piano and then together. McPherson’s heavy drum beats add to the air of mystery.

For Heaven’s Sake is the only piece not written by Yonezawa. It is a lovely piece that is performed extraordinarily well by Megumi. It is a gorgeous ballad and the trio makes it come alive in many different ways. The piano work is like something Bill Evans would enjoy. The bass lines are warm and the drums are fascinating. Listen to this one over and over and pay attention to all three musicians.

This may be my favorite piece on the album.

Nor Dear or Fear has a quirky, odd-meter opening that is catchy and fun. The bass and drums get into a great swing and Megumi plays off of it fearlessly…like the title says. That swing is felt nicely with the trading of bass and drums.

The piece reminds me of the epitaph of Nikos Kazantzakis, “I have no hope. I have no fear. I am free.” Megumi plays with it just that way. She is not reckless but she is determined and aggressive.

A Letter from Stillness is a meditative piece full of reflection and thoughtfulness. It comes from a sense of quiet that is only shaken by the glance of memory. The grip of the piece is inescapable. It is beautiful but it is inexorable. It is like Odysseus hearing the song of the sirens.

The album ends with Epilogue. It is a farewell that wrings the heart because it is not with hope of janeh (See you soon!) but is, rather, an acknowledgment of sayonara or goodbye. It is a frenetic farewell, without joy and final.

I am amazed at the delicate ferocity with which Megumi Yonezawa plays. John Herbert’s bass can be emotional, methodical, and relentless as Eric McPherson is exploratory and experimental, sensitive and sensory. With their support, Megumi springs forward with creativity and expression befitting someone who is determined to be heard and must be heard. Megumi Yonezawa is a voice from the future."

"Those outside of New York City, where Megumi Yonezawa currently resides, may only recognize the Japanese pianist, if anywhere, as sidewoman for Greg Osby (see 2004's Public on Blue Note), who brought her onboard following an enthusiastic endorsement from none other than Jason Moran. It was in Osby's band that she developed a rapport with drummer Eric McPherson, and along with bassist John Herbert forms the trio of this, her leader debut. Being such an inaugural enterprise, it invites listeners as if spectators through the doors of a newly opened art gallery, absorbing each track as a painting to be admired. This is, of course, one of many possible interpretations of the title song, which for the composer reflects a spectrum of human experiences. Its cocktail of nostalgia and forward thinking signals a full talent at the keyboard. Yonezawa's pianism clears roads of resistance with intelligence, interlocking with her rhythm section's arcs of brushwork and resonant bassing, and all with a comportment beyond her years.

Between this opener and a restless "Epilogue," Yonezawa, as she puts it, "dialogues" with the freedom of expression that is her muse. What begins as a rubato feeling out of territory locks into the off-kilter swing of "Dr. Jekyll And Mr. Hyde" and "Nor Dear or Fear," both of which feature appropriately bipolar playing from the bandleader and smooth renderings at the kit from McPherson. Herbert, for his part, emboldens Yonezawa's beauties in the enigmatic "Untitled." As the deepest valley in the album's topography, it's also its most comfortable and integrated, while "Sketch" makes up its cartography as it goes along.

But it's Yonezawa who stretches and primes the canvas of every tune, as made obvious in "Children of the Sun." Inspired by the vivaciousness of youth at play, it sports a tropical feel that shows her breadth as a colorist. As in her rendition of the standard "For Heaven's Sake" (the only of the album's nine tunes without a claim to her pen), she taps a wellspring of spirit, love, and faith. With a grandeur that is yet tempered by intimacy, it ascends patiently into sunlight, flexing like a bird's hollow bones. More than anywhere, one can hear shades of her many influences, ranging from J. S. Bach and Claude Debussy to Stevie Wonder and Keith Jarrett. In tending to these, she walks a middle ground through continents of liberation and precision. Even in the stilted dissonances of "A Letter from Stillness," she binds seemingly divergent planes with a strong emotional adhesive.

"Faced with endless choices in life as we are," says Yonezawa of this album's overall theme, "we nevertheless create lives of our own the moment we make a choice," and it's precisely her willingness to encourage the freedom not only of the music but also of the listening that makes this one choice you won't regret."

"Hokkaido-born pianist, Megumi Yonezawa, summoned the consistent bassist John Hébért and the reliable drummer Eric McPherson to be part of her trio. A Result of the Colors, released on Fresh Sound New Talent, is the product of their musical experience and chemistry, and love for the music.

The pianist’s refined musicality has enchanted not only Jason Moran, who wrote her a deserved recommendation, but also Greg Osby, with whom she played in his 2004 album Public alongside trumpeter Nicholas Payton, bassist Robert Hurst and drummer Rodney Green.

Yonezawa’s debut album opens elegantly with the sophisticated title track, which outspokenly tells us with which colors she intends to fill this nine-track palette. “Children of the Sun”, a rhythmically audacious song with interesting melodic accentuations, instantly triggered a favorable reaction in me. Spreading class over the ballroom, the trio arranged this one as a dissimulated jazzistic bossanova. This first couple of tunes is decorated with Hebert’s sculptural bass solos.

“Dr. Jeckyll and Mr. Hide” reflects the mutability of the characters it makes reference. Hebert and McPherson throw themselves at a vivid swing that serves as a tight guideline for the pianist’s bright melodic incursions.

The shortest piece of the recording, “Sketch”, is enveloped in a peaceful yet experimental musicality, in opposition to the unique cover of the album, “For Heaven's Sake”, a well-defined ballad written by Don Meyer, Elsie Bretton and Sherman Edwards in 1958. Embarking on a fantastic instrumentation, the trio fabricates “Nor Dear or Fear”, making us rejoice through a juxtaposition of hard-bop breezes and Monkish postures.

Challenging in her approach, Yonezawa possesses a strong technique with flexible, independent hands constantly seeking to choose the right notes and weaving propitious textures to compose the whole. Strongly influenced by Thelonious Monk, Keith Jarrett, Greg Osby, Jessica Williams and Bach, the pianist proved capable of speaking with her own voice.

A Result of the Colors is a fearless, positive debut, objectively oriented to captivate and make us ask about Yonezawa’s future moves."

"Pianist Megumi Yonezawa, hailing from Hokkaido, displays a more progressive approach (honed by associations with Greg Osby and Meg Okura) on A Result of the Colors, her leader debut. It’s tempting to compare her to Bill Evans, as her graceful intelligence, incisive romanticism and existential moodiness all echo the late maestro’s oeuvre. Moreover, her phrases often end prematurely, tailed by lingering silences that seem to beg questions of trio mates bassist John Hébert and drummer Eric McPherson. The former is only too willing to respond, often with extended asides or authoritative disquisitions of his own, prompting a high level of group interplay, which, again, recalls Evans’ collaborations with Scott LaFaro and Paul Motian. Yonezawa has a unique way with ballads, best heard on the standard-esque “Sketch” and freer “Epilogue”; her “Nor Dear or Fear” is a quirky but catchy line written over “rhythm changes”.