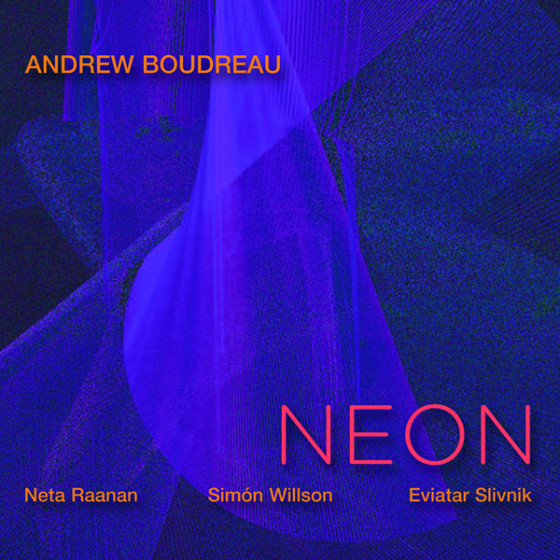 Music, the way most people experience it today, is disembodied and dislocated. It fills our ears and our homes; our private and public spaces. It’s transmitted across vast geographies by satellite, servers, wifi networks and bluetooth signals —surging streams of music that carry little trace of the musician other than a name and an avatar. But music itself always speaks to place and person. You can hear the history of the world in a song if you know how to listen. It follows that a recording, like this one, is a testament.

It says, “Here, it happened this way, and not some other way. We made these choices together, in real time. We made this music for a reason.” Neon is thoughtful, textured music by a complex modern jazz quartet. In nine tracks, Andrew Boudreau’s head and hands make biography and geography audible. Here, in no particular order, is some of what you can hear.Boston, and the different roads these musicians took —from Atlantic Canada, from Chile, from Israel and the United States— to arrive there. A Montreal neighborhood in rapid transition. Idiosyncratic and exuberant folk art by Nova Scotia painter Maud Lewis. A tender, angry, work by David Wojnarowicz that uplifts and indicts. Walking out of the Whitney Museum into a hot, grey, late summer day in New York City. Nights camping in Cape Breton. An expatriate Argentinian in Paris. Sand slipping through a child’ssieve in a tourist trap. The tree that stands alone in a field, halfway between Halifax and home.

You don’t need to know these places to love this music, just as you don’t have to know the musicians who made it. But listen, and they become a part of you. That’s what music can do. Recorded in the pandemic, but not of it, Neon burns through borders, sweeps you into its circle, and enlarges your world.

All compositions written and arranged by Andrew Boudreau

"Boudreau is superb; he has an outrageously compelling technique."

"The liquid pianism of Andrew Boudreau is a treat for the connois- seur’s inner ear. His debut disc Neon is launched in irrepressible fashion with vivid original compositions that appear to come at you from very interesting, oblique harmonic and rhythmic angles. Both complementary and contrasting colours and tone textures nestle cheek by jowl. They spring from a single source: the questing mind of a young composer and pianist who thrusts his music off the beaten path.

Boudreau makes a proverbial splash on his first outing as a recording artist. He brings his prodigious musical gifts to these songs. He plays with intuition and intellect; with elegance of form, generous lyricism and tumbling fantasy. This makes the program eminently beckoning.

The tunes Neon, Ghost Stories and Hopscotch are extraordinarily eloquent and seductive, and the pianist, justifiably shines through them. But this riveting musician- ship is not the sole purview of Boudreau. He plays with equally intriguing bedfellows. The bassist Simón Willson and drummer Eviatar Slivnik are fully attuned to the pianist’s vision and artistry and – together with tenor saxophonist Neta Raanan – these artists have formed an elegant musical relationship.

Boudreau – a talent worth watching – goes for unforced clarity rather than the nth degree of excitement. It won’t matter to you that his fresh, spacious and airy interpretation of this piano-driven repertoire lacks the kind of cele- bratory noise that many debutants go for on their first outing on disc."

"Neon is an appropriate title for Canadian pianist Andrew Boudreau’s latest recording. The album is all about atmosphere, and Boudreau and his quartet evoke a variety of moods by way of careful programming, evocative interplay and overriding intelligence.

Geography is among the collection’s themes, with assorted tracks inspired by locations important to Boudreau. But details about the specific spots he had in mind while composing aren’t necessary to enjoy them, since the images they conjure will be different for each listener. What’s more important is that each figuratively paints a picture.

Take “Ghost Stories,” which was influenced by Boudreau’s visits to a New Hampshire summer camp as a child. The number begins with drummer Eviatar Slivnik’s skittering rhythm, which Boudreau probes with an eccentric note pattern prior to the entry of tenor saxophonist Neta Raanan, whose tone is reminiscent of staggered breaths, and bassist Simon Willson, who unleashes plenty of limber lines. A tumbling Boudreau solo ratchets the tension ever higher, as does an extended showcase for Raanan that becomes increasingly feverish. But rather than rushing to the conclusion, the players synch up to create a communal sound that neatly avoids even a whiff of spook-show stereotypes.

Other highlights include “Mile Ex,” the tender, deliberate opener; “Maud Lewis,” a tribute to the Canadian folk artist of the same name, the arrangement of which takes a painterly approach; “The Water’s Cold,” a gorgeous exploration in which Boudreau’s playing absolutely sparkles; and “Hopscotch,” a contrapuntal wonder that moves with a sophistication far beyond the average playground champ.

At first blush, “Welcome Oak,” which closes the album, is less a song than a fragment — it lasts under a minute. Somehow, though, even this coda stands tall, and that’s a tribute to Boudreau’s craft. In short, Neon glows."

"The debut album from Canadian-born, Brooklyn-based pianist Andrew Boudreau, 2022's Neon is a measured record showcasing his nuanced modern creative jazz. A graduate of the Schulich School of Music at McGill University and the New England Conservatory, Boudreau has garnered accolades for his softly textured soloing and compositions, including winning a 2013 Astral Artist Prize. It's a style that has brought him into contact with players like saxophonist David Binney, vocalist Christine Correa, guitarist Simon Legault, and others. Here, he leads his quartet, a group that features saxophonist Neta Raanan, bassist Simón Willson, and drummer Eviatar Slivnik. Together they play with a hushed and thoughtful intimacy that brings to mind Wayne Shorter's acoustic quartet. Tracks like "Ribbons," "Maud Lewis," and "Ghost Stories" are delicately swinging yet still highly kinetic numbers that imaginatively evoke something along the lines of Paul Bley playing with Sonny Rollins. There are also several languid ballads, including the title track and "Welcome Oak," that display Boudreau's ear for rich chordal textures. While one wouldn't necessarily call this a classical album, there is a hypnotic, meditative quality to several of the songs that recalls the modern classical work of composer Steve Reich. There's a warm camaraderie to Boudreau's work with his quartet, and it illuminates all of Neon."

"After many decades of writing about music, snap judgements come easily to me. So it's always a welcome surprise when I press “play,” the music starts, and I'm immediately intrigued by what I'm hearing but not at all sure what to think about it. That was the case with Neon, the superb debut release of music by pianist Andrew Boudreau.

Boudreau met bassist Simon Willson when they both studied at the New England Conservatory. Tenor saxophonist Neta Raanan and drummer Eviatar Slivnik were students at the nearby Berklee College of Music when the four became acquainted. As a unit animating Boudreau's tricky but appealing compositions, the quartet achieves a distinct sense of unity and cohesiveness. The keys, I think, are thoughtful understatement coupled with a self-assured attitude that lets the music breathe without ever sounding forced. Raanan's snaky tenor solo on the opening track, Mile Ex, reveals a vivid musical imagination and the taut energy of spirited give and take with the rest of the band. She's even better on the next piece, the snappy Ribbons, highlighted by a playful passage with Boudreau's energetic piano. Boudreau's crisp touch at the keyboard, thoughtful accompaniments, and melodically rich solos are a big part of the music's success. In bassist Willson and drummer Slivnik, Boudreau has found a team that works beautifully together, keeping the music flowing with infectious energy. Boudreau's inspirations are as varied as Canadian artist Maud Lewis, childhood summers (the expansively grooving Ghost Stories), his suddenly trendy Montréal neighborhood (Mile Ex), and the fiction of Julio Cortázar (the forceful and intricate Hopscotch). The Water's Cold, with its intricately intertwined introduction of arco bass, lush piano chords, brushes on drums and cymbals, and a slightly muted saxophone line, is a particular favorite.
That's just one of the disc's many highlights. While it's still early in the year, I'll be surprised to hear a better rookie effort in 2022. Definitely recommended."

"Would it be too much of a cliché to say that pianist Andrew Boudreau brings the Northeastern territories of North America to life on Neon, his leader debut? After all, he was born in Nova Scotia, lived for most of his life in Montreal, was educated in Boston, and currently resides in New York City. While many of us profess ignorance of the jazz traditions of Nova Scotia, it’s certainly clear that Boudreau sounds perfectly comfortable in the international home of jazz. The incandescent “Mile Ex,” the brooding ballad “One Day” and the sweeping, swinging “Ribbons,” on which he’s accompanied by his longtime band of saxophonist Neta Raanan, bassist Simón Wilson and drummer Eviatar Slivnik, attest to that.

While generally a melodic player, with a rippling solo style and an easy way of putting chords alongside each other so they sing, he’s not afraid to tinker with the obvious, either. The head of the 6/8 “Maud Lewis” threatens to fall into discordance, but never does, while the cockeyed “Ghost Stories” finds its harmonic clashes made smooth by the crack rhythm section and Boudreau’s fingerwork. The lustrous “The Water’s Cold” and the tension-baked “Hopscotch” make good use of unusual (though not abrasive) rhythms, which encourage Boudreau to wander outside the melodies’ comfort zones. In play, compositions and arrangements, there’s an awful lot of talent on display on this impressive debut."