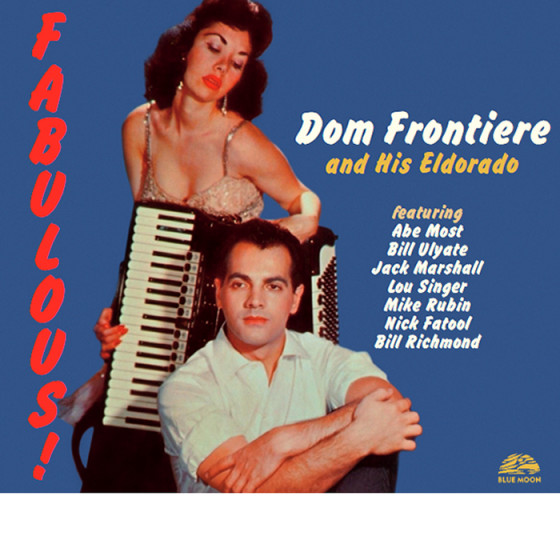 Dominic Frontiere (1931-2017) had barely turned four when he began learning the basic accordion technique. Having mastered his instrument through his classical studies, Dom became interested in modern music. In 1950, he moved to Hollywood, where he lost no time in establishing himself, not only as the leading accordionist in the movie industry but as a composer and arranger as well. He also appeared playing in several films, but 1955 brought him something special.

In March, Dom was signed to a term recording contract with Liberty Records, which led to his first album recording as a leader in the summer, conducting a sextet made up of renowned fellow Hollywood studio musicians. The album came out in the fall with the title “Dom Frontiere and his Eldorado.”

A year later he turned his group into an Octet to record “Fabulous!!,” his second album for Liberty. Frontiere’s musical talents were limitless. His skill with the accordion was indisputable. “In the hands of a master [the accordion becomes] much more than a polka party instrument,” Down Beat magazine admitted.

Starting in 1960 and over twenty years, the scores he penned for popular TV series and films, garnered him awards and international recognition as the firstrate composer he was.

On this CD set we wanted to remember his first two albums, back from the time this young instrumentalist and arranger revealed his talent and personal approach to the world, by skillfully blending the harmonies of classical music with the rhythm and improvisation of jazz. Dominic Frontiere and his stimulating musical confreres bring us a varied repertoire of well known melodies and originals in their own spirited, happy and swinging way.