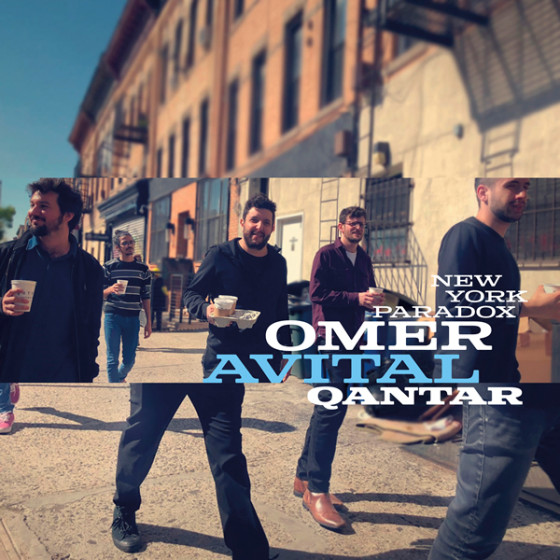 All compositions written by Omer Avital

The band was recorded live in one room, no headphones, no separations, no edits

A joint release of Jazz & People and Zamzama Records

"The world in its collective viral neurosis is in a cold sweat. What to do? Store shelves are empty, hands have never been cleaner, and if all goes wrong, salaries may soon rise for those who will work. In these trying times, some days you simply must "Avital"—Omer Avital understands this. Thanks to his latest album, New York Paradox , you can, that is you can eavesdrop on the newly broken horizons made through the "rhythmic and harmonic vocabularies underpinning 20th and 21st century hardcore jazz expression to flow with a polyphonic attitude and musical multilingualism." (Bootsy Collins is saying "You dig?" again.)

Avital's Qantar band is too bright to lodge with the usual sparklers. If hope is "defiantly elegant music flourishing in the harshest environment," then appreciate the glow assembled around Avital. Qantar is a band of seeming brothers, who represent intelligent joy in a thousand refractions. It is a full jazz-full of the world, full of love, full of energy...burgeoning hope and fulfilment, and unlike New York it doesn't appear to be a paradox.

Lazy cool/less-is-more is a masterful quality. Avital makes sounding unified and intelligent like he woke up one day and had the perfect band...not so easy, his gig schedule over the last twenty-seven years has been intense and comprehensive, so it's no surprise that this level of artistry is the result of a lot of shared investment and tacit learning. For those far from the Bushwick area of New York and unable to visit Wilson Live! Qantar is something distinctly special. Keep your ears on Zamzama Records and the Jazz&People Label.

New York Paradox begins with the powerhouse introduction of "Shabazi," showcasing the interconnectedness of Yemenite roots between all Qantar members. It hits straight and hard and outsmarts with ease, with compelling force from Ofri Nehemya on drums and the perfectly interwoven bass line of Avital. "Zohar Smiles," as only a child can, a slow-paced, nurtured awe delivered by an equally respectful band. Who doesn't love a profound response to the expression of a father acknowledging the sweetness of his child? "New York Paradox," exhibits all the exuberance, energy and dichotomy of a megalo-city, and Eden Ladin on piano delivers both a delicate touch and strong statement alongside Asaf Yuria's sublime soprano voice, warmed by the shadowy tones of Alexander Levin's tenor. If you yearn for a new rival for Branford Marsalis, this tune is a close sound.

"Just Like The River Flows" is easy on the ear, sweet beats and reassurance, tea and sympathy, nods and smiles. All day, every day the wise one glows. From the source to the sea, every swirl, eddy, turbulence and current is here. Ladin's command calls to mind Ahmad Jamal.

"It's All Good (later 90s)" is a beautiful stroll in African American soul cool, a nod to old church tunes and a supreme recollection of the admiration that Afro-American and Jewish communities have had for each other through music for so many years. If all in life would hold this. "Today's Blues" is a sunny morning wake up blues—acceptance and gratitude for all that small time hassle—and it hits nice. The grace of each handover and exchange between band members is refined and energising. Early times or home times, it's a lively start or end tune. "C'est Clair" makes everything more sharply focussed. A stirring forward that rouses to a grand duet tenor sax feature, time for seriously blue, addressing real pain and consolation; music is the best medicine.

"Bushwick After Dark" has the self-awareness of the intricacies of a long jazz time line and the richness of character of And All Those Cats Sahib Shihab (Rearward, 1997) and Mingus Ah Um (Columbia Records, 1959), it magic's Charles Mingus out of thin air. Cool bein's Qantar, you may need the sound of their freedom in this exceptionally restrictive year."