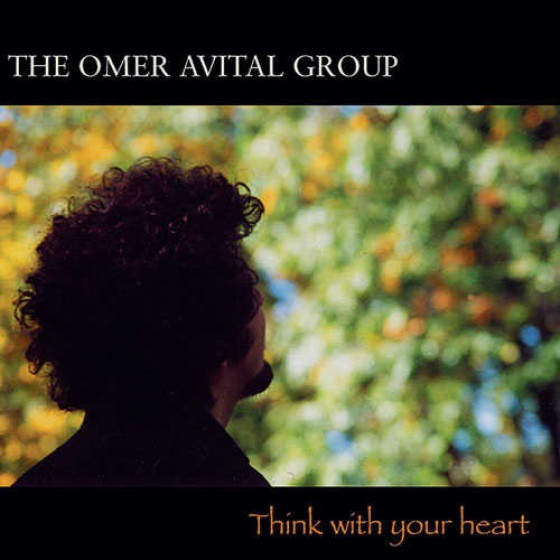 Think with your Heart

"The spirit and substance of musical multiculturalism are displayed with joyous clarity on "Think With Your Heart", the leadership debut by Israeli bassist Omer Avital.
What makes this such a warmly winning recording - in addition to Avital's thrusting bass support, intriguing tunes and arrangements with no brass players or piano - is his cadre of woodwind players: Saxophonists Greg tardy, Myron Walden, Jimmy Greene, Joel Frahm and Jay Collins - all strong in section work as well as solos - have recordings available, yet are far from household names, despite their forceful and sensitive expressiveness.
Elements of the Mediterranean are incorporated seamlessly with inspired jazz improvisation. Avital's writing has great pacing, featuring deeply expressed ballads along with hard.driving cookers. His woodwind ensemble, ranging in size from four to six players here, brings to life memorable compositions through arrangements that either cushion or propel the solists.
"Think With Your Heart" brims with booting solos and wll-conceived ensemble backing. Even "Stella By Starlight" gets a fresh look. Avital's occasional encouraging shouts behind the soloists are clear expressions of delight, and drummers Daniel Freedman and Marlon Browden help Avital keep the rhythmic pots boiling. "

**ALL ABOUT JAZZ REVIEW**

"These days, when a young bassist leads a horns-based band, the comparisons and correlations to the late Charles Mingus become inevitable. Israeli-born bassist/composer Omer Avital delivers the goods in prominent fashion while exhibiting star-like qualities on his debut solo offering, entitled Think With Your Heart!

The majority of these works are constructed upon buoyantly executed rhythms, all encircled within climactic opuses and the musicians' intermittent injections of funk, soul and swing. Avital and associates take the listener on an enigmatic journey during "Marrakesh," thanks to the sax sections' efficient utilization of space atop a world beat vamp and a celebratory Middle Eastern style motif. Nonetheless, the woodwind section and the percussion unit keep this train a rolling via an abundance of glimmering solos and sympathetic interpretations of Avital's often-lucid compositions. No doubt, Avital has produced one of the top ten jazz outings of the year. - - Emphatically recommended!"

"Bassist Omer Avital is strong and conceptually ambitious on his debut recording. After beginning with an unaccompanied rendition of Bob Marley's "Redemption Song," he leads his group through eight stirring originals, as well as a 5/4 arrangement of "Stella by Starlight." The record is a sax-and-flute fest: most of the tunes burst with the harmonic richness of a little big band, thanks to the presence of Jay Collins, Greg Tardy, Myron Walden, Joel Frahm, and Jimmy Greene, at times all on the same track. Daniel Freedman plays drums on six cuts, Marlon Browden on three. Avital the arranger is more than capable of harnessing all this combined talent; what's more, he never falls back on obvious devices or rote solo rotations (there's usually only one soloist per tune).

Some of the tracks run together as segues, giving the record a suite-like structure that increases its emotional impact. Stylistically, Avital is a sponge, borrowing from North African musics on "Andaluz" and "Marrakesh" (featuring Joshua Levitt on the nay flute), Latin on "Make Believe," even traces of bluesy rock on the somewhat mournful title track.

The sensual "Tune in 'D'" defies all categories. In terms of technical mastery, Avital reaches the heights with "Flow" - a riotously colorful samba reworking of John Coltrane's "Giant Steps." It's also worth mentioning that Think With Your Heart is impeccably recorded. One can hear the full contour of every note from the bass, and, occasionally, gleeful shouts from the enthusiastic leader himself."

"While the publicity accompanying the CD, Think With Your Heart, compares bassist Omer Avitals leadership with that of Charles Mingus, a more apt comparison would be one involving Avishai Cohen. Both bassists were born in Israel; both served in the Israeli army; both pursued their musical dreams to New York City; both lead their own multi-cultural groups; both synthesize jazz with Middle Eastern references; both have performed with legendary jazz musicians; and--small world--both developed their music and first presented it to audiences at Smalls in New York.
The extroverted energy of both musicians, as well as their technical originality, creates such force that the bass, normal in the shadows of the back of the stage, dominates their groups with propulsion and adhesion.

Now, Avital--having backed the likes of Roy Haynes, Joshua Redman, Nat Adderly and Antonio Hart--has released his first CD as a leader, and a more personalized and honest record (in both senses of the word record) could not be found.

Writing all of the tunes but Stella By Starlight, Avital has established entire scenes--complete with not just straightforward hues, but also intricate details building comprehensive murals of sound--that recall scenes of Moroccan sunrise or natural tranquillity stirred by underlying pulse.

Avitals instrumentation and method of arrangement are telling too. With no chorded instrument to set up changes, Avital instead relies on a reed chorus to evoke the thoughts in his heart. Allowing his reeds freedom of expression, Avital finds that they sometimes shift from one context to another with just the note placement of a single horn, like the internal movement of a pianos chord movement. Even Stella By Starlight assumes a haunting sense of foreboding, Avitals technique of metrical tension--an opposing and yet complementary rhythm animating the tune within the larger metrical framework--freeing the tune for unexpected possibilities.

Starting the CD with a solo performance of Bob Marleys Redemption Song, Avital lets it be known that his music assumes larger purposes--those of catharsis and healing--by delving into the spiritual basis of the worlds music.

And let us not forget that Avital is a superb bassist in his own right, trading fours with his drummers or setting up the complex rhythms of Marrakesh, Avital being an ever-present driver of the music.

Think With Your Heart, a CD of appealing strength and outstanding musicianship, is quite unlike any other."

The less well known Israeli bassist in New York [Avishai Cohen is the other], Omer Avital is a player with a pedigree. Along with the likes of Jason Lindner, Daniel Freedman, Myron Walden, Charles Owens and Jimmy Greene, he is a graduate of Smalls, a club in the apple much favoured by students and tourists whose budgets don’t stretch to some of the plusher joints uptown. Back in 1998, the Smalls scene was fleetingly documented by Universal/Impulse! on the compilation Jazz Underground, which featured Avital and most of the aforementioned but the album made very little impact on the marketplace. It always felt as if a major label wasn’t really the right outlet for something like the Smalls scene and this was borne out by the subsequent signing and dropping of Avital’s friend and colleague Jason Linder.

Fresh Sound seems to be a much better place for these young musicians; it might be unwise to talk about the label as the ‘next big thing’ but at the moment it seems to be a very laudable ‘big small thing.’ That lopsided description might well apply to Think With Your Heart; it’s a poetic, romantic, evocative set of pieces whose soaring orchestrations for a highly charged octet never cloud the core rhythm section of Avital and drummer Daniel Freedman. The duo lay down rhythmic frameworks that are as supple as they are sturdy, with Avital showing himself to be totally at ease with lines based on wiry, middle eastern modes around which complex contrapuntal horns weave graceful figures. In a similar way to Avishai Cohen, Omer Avital is bringing improvisation and Arabic musical culture into swirling compositions whose intricacy in no way diminishes their quasi-hypnotic emotional charge. An excellent, assured debut.