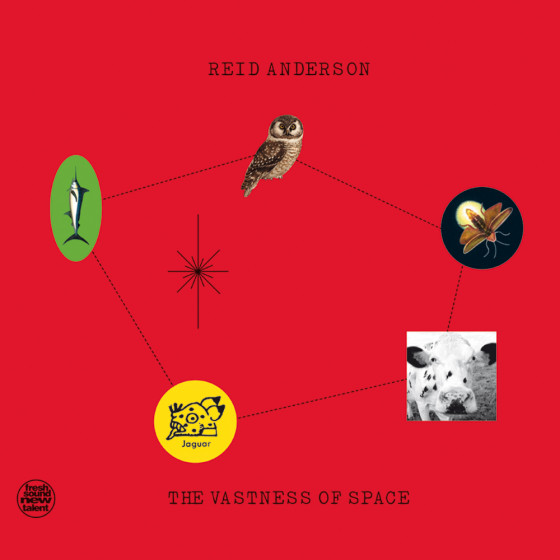 "Before he rose to jazz renown as one-third of The Bad Plus, bassist Reid Anderson put out two albums on Fresh Sound New Talent, 'Dirty Showtunes' and 'Abolish Bad Architecture,' that stand up as classics of turn-of-the-millennium New York jazz. Anderson remembers these quartet dates as his first forays into original composition, full of dark and intriguing harmony and quirks of form that were forward-thinking in an acoustic jazz mold.

After the two initial albums, Anderson underwent what he describes as “a very conscious and discernible shift” in 2000 with his third FSNT release, 'The Vastness of Space.' The writing was starker and simpler in a sense, more triadic and rock-edged in its language, moving decisively toward the sound he would pursue full-time with The Bad Plus. Two tracks from Vastness, “Prehensile Dream” and “Silence Is the Question,” became Bad Plus numbers. “Whatever you can say my style is,” Anderson remarks, “I think it really began with The Vastness of Space.”

Vastness features a quintet with the beating heart of a rock band. Andrew D’Angelo and Bill McHenry, saxophonists with impressive track records as leaders ever since, brought two distinct energies and horn approaches to Anderson’s early tunes yet functioned with seamless compatibility as a frontline. (“The Owl” is McHenry’s nickname.) Ben Monder, soft-spoken guitar giant of our time, provided just the right touch whether doubling melodies, laying down chords or venturing poignant solo flights, giving every song his own stamp (not to mention a harmonic underpinning quite unlike Ethan Iverson’s piano on the two previous Anderson discs). Drummer Marlon Browden, now in Berlin and focusing on songwriting and electronics as a multi-instrumentalist, has a loose and funky flow that suits Anderson as a bassist and gives the session lots of its grit.

“The Enthusiast,” “The Owl” and “The Captain” are rock-inflected anthems with a direct and inescapable lyricism, but also an element of raw free jazz. There are slow tempos and yearning romantic moods (“Foxy,” “Talons,” “Melismatic Clouds of Joy”) as well, or atmospheric and asymetrically grooving episodes such as “Reclusive.” There is complexity, counterpoint, polyrhythm, orchestration, dynamic contrast and a certain wildness to the album, a stylistically searching aesthetic that paved the way not only for The Bad Plus, but also Anderson’s Golden Valley Is Now collaboration with Craig Taborn and Dave King, or his electronics work with the adventurous Jeff Ballard led group Fairgrounds.

Years ago Anderson told me that once he has a concept for a song in his brain, to commit it to paper is already somehow to dilute or corrupt it. A necessary stage in the process, perhaps, akin to getting a bicycle tire fully inflated but then having to let just a bit of air escape when disengaging the pump. The point being: if 'The Vastness of Space' is but an approximation of the fully realized music Anderson was hearing in his head, then just imagine..."