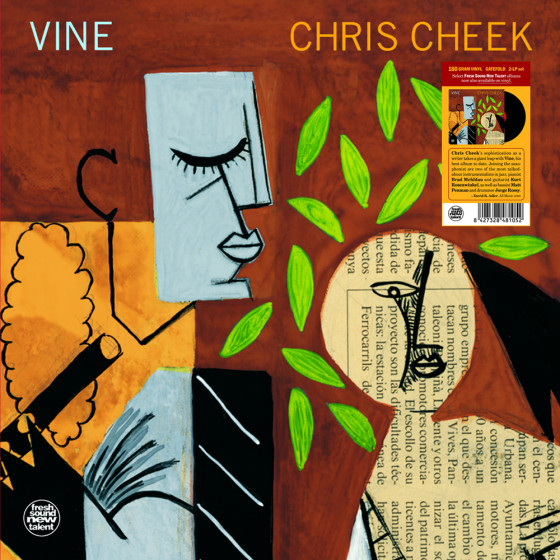 Having spent close to 30 years recording some of the most promising musicians in jazz —from the prolific scene of the 90s until today— Fresh Sound New Talent is revisiting its origins by popular demand, this time on vinyl.

For this new series, we bring you a timeless album by CHRIS CHEEK one of the most influential and widely acclaimed jazz leaders of his generation who made his recording debut for FSNT.

All compositions by Chris Cheek

"Chris Cheek's sophistication as a writer takes a giant leap with Vine, his best album to date. Joining the saxophonist are two of the most talked-about instrumentalists in jazz, pianist Brad Mehldau and guitarist Kurt Rosenwinkel, as well as bassist Matt Penman and drummer Jorge Rossy. Mehldau plays acoustic piano on only three tracks; otherwise, his instrument of choice is the Fender Rhodes, which blends with Rosenwinkel's guitar in subtle, miraculous ways.

"So It Seems" begins the album with winding melodies over a double-time feel and space-age chords that suggest club genres such as jungle and drum-n-bass. Rosenwinkel's solo is dirty and distorted; his expressive vocabulary takes some startling and highly original turns, such as falling off a note with an awkward wobble to end a phrase. In contrast, his solo on the quick 6/8 tune "Ice Fall" glistens with a clean tone and flawlessly executed lines. Mehldau is in top form throughout, getting around the Rhodes with consummate flair and playing beautiful piano behind Cheek's soprano sax on the final duo piece, "Not a Samba."

There's an epic side to Cheek's writing that we haven't quite heard prior to this album. In addition to "So It Seems," there's "The Wing Key," a Latin-tinged exploration that begins with a series of stunning tenor/guitar unison lines; "Granada," a more introspective piece with a Spanish-style hook at the end of the form; and "What's Left," a bright 12/8 piece that Mehldau, Cheek, and Rosenwinkel whip up in turn with brilliant solos. In contrast, "Vine" and "Reno" are simpler constructions, more similar to the folk and country elements heard on Cheek's previous album, A Girl Named Joe. Perhaps this is what it would have sounded like had Keith Jarrett ever happened to sit in with The Band.

It's not exactly surprising when a "dream team" of players such as this shines with instrumental brilliance. But it takes an artistic sensibility as focused and fully realized as Cheek's to work with the raw materials at hand and come up with something smashing."