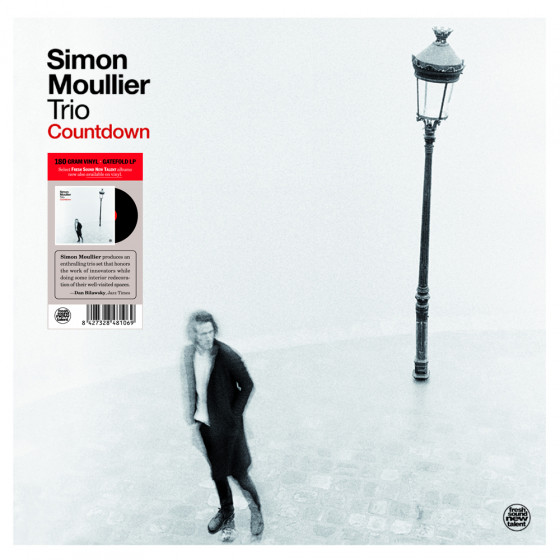 On his sophomore album, Countdown (Fresh Sound), vibraphonist Simon Moullier ups the ante from the high bar that he set on his impressive 2020 debut, Spirit Song (Outside-In).

Moullier, 26, showcases on Countdown, an individualistic, erudite acoustic trio encounter with Luca Alemanno on bass and Jongkuk "J.K." Kim on drums, Moullier says, as an homage to “the great composers and pillars of jazz.” Recorded a week after the last studio session for Spirit Song, it opens with the title track – a high-degree-of-difficulty line by John Coltrane from his seminal 1960 album Giant Steps. There follows a succession of fresh, kinetic collective interpretations of pieces by Thelonious Monk (“Work” and “Ask Me Now”), Charles Mingus (“Goodbye Pork Pie Hat”), Tadd Dameron (“Hot House”), Bill Evans (“Turn Out The Stars”), Toninho Horta (“Beijo Partido”), Cole Porter (“I Concentrate On You”), Eden Ahbez via Nat King Cole and Coltrane (“Nature Boy”), and Jerome Kern via Charlie Parker (“The Song Is You”).

“I was always curious to find ways to create within the confines of these great tunes,” Moullier says. In approaching this canonic repertoire,Moullier – who recalls past tributes
to vibraphone immortals Lionel Hampton, Milt Jackson, Bobby Hutcherson and Gary Burton in his performance c.v. – addresses the songs on their own terms of engagement while hewing to the “be yourself” aesthetic dictum imparted to him by Herbie Hancock and Wayne Shorter, both mentors during a 2016-2018 matriculation at the Thelonious Monk Institute in Los Angeles.

“They developed a profound body of work on an instrument that didn’t have a lot of history,” Moullier says of his distinguished predecessors. “I try to focus on their spirit, and emulate their feel. But mainly, I spend lots of time listening to and emulating instrumentalists like Bird, Coltrane, Freddie Hubbard, Chick Corea, Herbie Hancock, Sonny Rollins, and Cannonball Adderley, and singers like Nat King Cole and Billie Holiday. I’ve tried to figure out how to bend notes onmy instrument and get amore vocal quality to my phrasing. Then I started incorporating new techniques to develop further possibilities of expression on the instrument and within my language.

“I’ve always wanted tomake the vibraphone disappear, transcend the instrument into
something else. Always with flow of expression being the priority.”

Moullier’s abiding desire to expand the vibraphone’s parameters connects to his embrace of the no-safety-net trio context with Alemanno and Kim, his roommates during a two-year stay in Brooklyn, where he beelined directly after graduating from the Monk Institute. The distilled clarity, the playfulness of their collective interplay on each song testifies to their long acquaintance.

“As a vibraphonist, trio is the most challenging lineup because it’s difficult to handle
both the melodic and harmonic realms,” Moullier says. “A lot of these arrangements took place in the practice room while I was searching for different ways to achieve fluidity and agility on the instrument. But it really becomes alive when the three of us workshop it together. We pay a lot of attention to the frequencies of each instrument and where they fit; the mood of a song; awareness of each melody, form and structure; developing grooves for a long time until we find the right feel. We also focus on having variety in our repertoire and tempos. All this has been part of our research into transcending the instruments and making the trio sound like one.”

Moullier has described Spirit Song as “the birth and summary of my influences from
L.A. and New York.” With that remark in mind, think of Countdown as documenting his
assimilation of those influences into a completely personal argot. “Making this record
last May, when everyone was adjusting to COVID, was an escape valve for us,” Moullier
says. “I felt a sense of urgency, as though we had a countdown to create before the
pandemic shut down everything. I can see this record as a reflection of that urgency, of
how we felt during that period – but also as the result of playing so much together during the last few years.”

"Countdown, the quicksilver John Coltrane étude, has a reputation fearsome enough to rival its more famous familial counterpart, "Giant Steps." To record the song at any point in the post-Coltrane continuum is to plant a flag —as have a handful of ambitious souls, from Kenny Garrett to Brad Mehldau to Joey Alexander. Now here's vibraphonist Simon Moullier with an album, his second, named after the tune. What are we to think?

Well, listen first. You'll hear that Moullier has an ingenious set of strategies for breaking up the theme, and the proficiency to make it flow when he so desires. His trio, with Luca Alemanno on bass and Jongkuk Kim on drums, matches every flicker without missing a beat. "I was always curious to find way to create within the confines of these great tunes," Moullier tells Ted Panken in the liner notes. Throughout Countdown, which also includes pieces by Mingus, Monk and Dameron, that curiosity pays off, with interest."