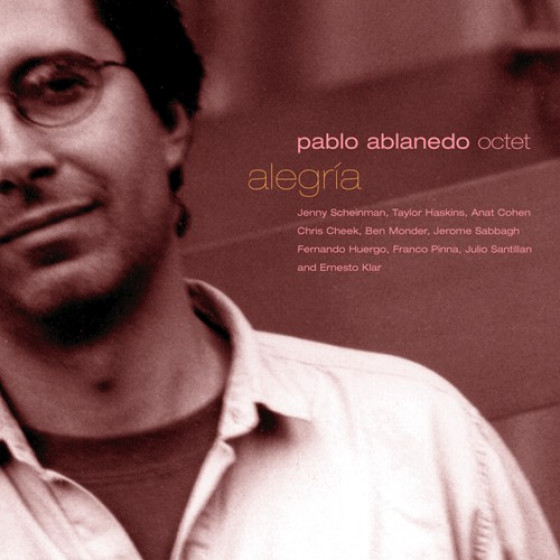 This is Pablo Ablanedo's second leader recording for Fresh Sound New Talent. The critically-acclaimed "From Down Here" has earned him a place alongside the great young jazz composers of his generation. Originally from Argentina, Pablo recorded this album in New York along with a host of other excellent young jazz players, who some will recognise form their recordings on the FSNT label: Chris Cheek on saxophones, Taylor Haskins on trumpet, Ben Monder on guitar and Fernando Huergo on bass.


"Today it may seem odd to name an album "Alegria". I would just like to mention that the name of my work, "Alegria" (Joy), alludes to the happiness of creation. It refers to an intimate and jubilant space in my soul that I try to cultivate and care for each day. It is also a place where I find shelter, and that protection leads me to action. When I finally finished this work, the idea of resistance by using joy as a shield lingered, so I decided to keep the name for this CD. Here is this music, like a barricade of hope for these times in which we all live."

****1/2 in Down Beat: "With his latest effort, Argentine pianist/composer Pablo Ablanedo pronounces a sense of joy. In the liners the artist emphasizes that this work, "alludes to the happiness of creation." To that end, Ablanedo and his octet disseminate a set of emotive musings via a Spanish-tinged luster combined with polychordal horn charts and more. He indisputably conveys a sense of optimism throughout these superbly constructed theme pieces--often complemented with a symphonic edge--and memorably tuneful arrangements.

Drummer France Pinna emulates castanets in support of Haskins" trumpet solo on "Una Mas," as the band minces discreet elements of flamenco with modern jazz inclinations. And there lies the beauty of it, as Ablanedo triumphantly bridges the gap between classically oriented austerity, Spanish romance and persuasive, jazz-based ruminations. With "La Vida Sigue," the band engages in a contrapuntal-type ostinato vibe interrelated with punctual horn charts and lamentable interludes.

Equally important is the leader's incorporation of climactic overtures in concert with bustling jazz grooves and stunningly attractive melodies. In addition, the soloists often engage in chirpy dialogue, amid heated movements and supple flows. With his second release, Ablanedo's personalized colloquialisms shine forth in a grand way."

"In the photo included with Alegría, the Pablo Ablanedo Octet resembles a nerdy and decidedly square bunch. Their music, however, has no equal in the market, patterning highly urbane musical concepts and compositions, coupled with advanced ensemble work and superior performances from all musicians. The leaders ethnic background is unmistakable, although one must leave any preconceptions about the possibilities afforded by such a coalescence of jazz, classical and Argentinean popular, folk and cultured music.

On Una Más, or Another One, there is a latent urgency experienced through an increasing degree of intensity. Pairing the writing with highly effective tension and release sections of attractive percussive coloring leads to a highly versatile and forward-looking drum solo by Franco Pinna, whose earlier lardy playing with the bombo legüero introduced an extended solo passage by the excellent Taylor Haskins on trumpet. The latter has superb control of his breathing, a breathy tone with ample emotive, harmonic, melodic and rhythmic data to process the complexity that characterizes this remarkable production and its distinctive sound.
Being Argentinean means that Latin American aesthetic surrealism and the characteristic penchant for melancholy will rank high in the harmonic and melodic structures of Ablanedos compositions. On both Coral and La Procesión, respectively meaning Chorale and The Procession, there are extended ruminations of brooding nostalgia that amaze in interest rather than bog ones emotions down. One can actually see and feel the procession inching slowly towards their unidentified, yet instinctively known destination. Harmonically and melodically privileged playing characterizes both of these humane and stately pieces.

La Vida Sigue (Life Goes On) has a most celebratory head which sets the overall impetus and flow of almost 11 minutes of silky exuberance. Jerome Sabbagh shines on reeds with impeccable technique, loads of heart and soul, and loaded lines of thought. Ablanedo and Haskins also play a vital role in pulling off a vehicle for conveying the binding dance of the living. The pianists classical chops come to the fore when heeded by the composition; yet, before you even realize it, you are enveloped in a boppin mid-passage kept pulsing by Sabbagh until released by Ablanedos passage of beauty and reflection. Just like life

The Pablo Ablanedo Octet merits many other words of praise, including a more rigorous comment on Jenny Scheinmans impressive violin work, the remarkable arrangements and compositions, as well as the endemic capacity for the tunes to embody their thematic outlook. Together and on their own, these musicians are simply impressive, as this is challenging material that demands restraint, good taste, discipline, an expansive expressiveness and technique that can only be gained through experience."

"It would be a mistake to pigeonhole the pianist/composer Pablo Ablanedo as a "Latinjazz artist: the lush, complex weave of his writing for octet on the new Alegria (Fresh Sounds) has as much to do with Gil Evans as with the tangos of Ablanedo's fellow Argentine, Astor Piazzolla. Part of the reason is the instrumental mix: violin, trumpet, reeds, guitar, bass, drums. But it's also Ablanedo's ability to craft long compositional
arcs for his improvisers --- extended forms that transcend the pop song formal conventions of even the most adventuresome jazz. And, yes, he does include plenty of tango, zamba, and chacarera."

"Avishai Cohen played most of the Octets live rehearsal concerts, but family problems prevented him from making the record dates. He would have fitted in so naturally. Pianist-composer Ablanedo is another major talent from Argentina and this NYC recording features his countrys finest plus Haskins, Scheinman , Cheek and Monder, all of whom have featured solos.
The music is majestic. Proud, optimistic and spiritual, a mixture of jazz, modern classical and the most soulful of ethnic Spanish sounds and rhythms. With the exception of Klars distracting electronic experiment using Ablanedos voice mouthing part of his countrys national anthem (El Grito Sagrado), all the music is by the leader.

Three of the most impressive compositions are over 10 minutes long. The striking, fanfare-led title track, the Spanish word for Joy, is dedicate to Stravinsky and, despite its message of hope, would not sound out of place at a funeral.

The slowly moving Procession has pastoral overtones, with Sabbaghs soprano solo particularly poignant. Chris Cheek is equally effective on Magic Spirit, Naïve and the flamenco-flavoured closing track, And Like This He Goes , where Monder selfeffacing solo adds to the melancholy mood.

Theres an impression by Haskins of what Miles might have brought to Lux and Chorale is a gorgeous extended work, featuring the understated, but important contribution by Jenny Scheinman.

You may dont like all this music, but most of it is magnificent and will stand the test of time. Respect to Señor Jordi Pujol for giving the talented Ablanedo the necessary budget to do his work justice.