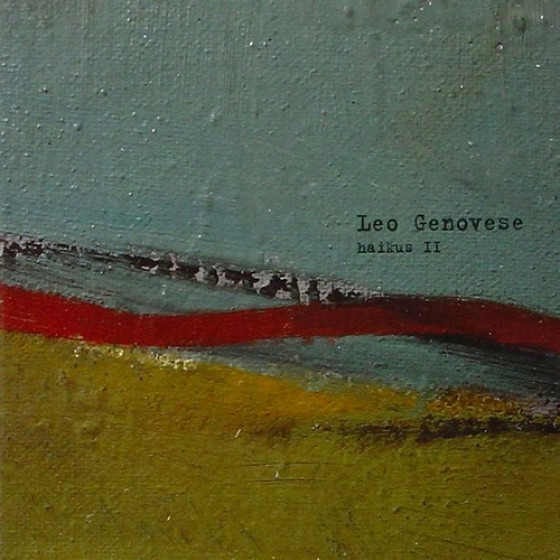 This is the first album as leader on Fresh Sound "New Talent" for the superb young Argentinean pianist Leo Genovese. He has assembled an interesting group for this recording, including FSNT-regular Phil Grenadier on trumpet and also bassist Demian Cabaud and drummer Francisco Mela. This collection of nine pieces mixes originals and wonderful interpretations of the classics "I'll Remember April" and "All The Things You Are". The "Haikus" in the title of the CD and the title of many of the pieces here refer to the ancient and long-respected tradition of traditional Japanese poetry, an art form that is based on the construction of seventeen-syllable poems reflecting personal thoughts about the world. These poems reflect the simplicity of thought and the essence of an object and on hearing the simplicity and delicacy of Leo's compositions and piano style, you'll begin to understand.

"Haikus II is the wonderful new disc from young Argentinean pianist Leo Genovese. The core group, a trio, includes Demian Cabaud on bass and Francisco Mela on drums. The trio is joined on three tracks by tenor saxophonist Nathan Blehar and trumpeter Phil Grenadier. Surprisingly enough, each of these musicians, though fine players, is relatively unknown (at least here in the States, anyway). The exception is Grenadier, who happens to be the brother of the extremely successful jazz bassist Larry Grenadier and has a bit of a track record as a sideman with the likes of Eric T. Johnson and Brooke Sofferman, among others, in addition to two recordings as a leader. But though they may not be household names today, thats bound to be a temporary situation. Its difficult for artists with this enormous degree of talent and creativity to stay secret for very long.
This is a very interestingly conceived album and has, in a sense, a split personality; sometimes explosive and sometimes ethereal, with one foot in the past and one in the future . Much of it is fairly free, especially the trio tracks. I wouldnt exactly call it avant-garde, but there are times when they get close to the edge. Two perfect examples of this are the dramatic liberties that the band takes with the only two standards on the album Ill Remember April and All The Things You Are. These two songs have been deconstructed and rearranged in such a radical way as to be completely unrecognizable as the standards they were derived from, save but for a bar or two when the melody is hinted at. And yet, it all works extremely well. Another good example is the Genovese original Haiku N 12 which is basically three minutes of simultaneous group improvisation over a simple theme. A lot of groups have trouble recording tunes in this style that appeal to both avant-garde and non-avant-garde fans alike, but this track (and in fact, the entire album) is very accessible and should please a wide range of tastes.

The songs on which the horns join the trio have a more straight-ahead (though still very modern) feel and it brings a nice sense of variety to the album, but without spoiling the overall concept. Grenadier and Blehar have great chemistry together, each seeming to urge the other on as they deliver blazing, passionate solos. But its the core trio that really holds everything together and makes this recording such a special date. Im not sure how long theyve played together, but they display a great sensitivity, not only towards each other but also in regards to their approach to the art form of the music itself. As an example, the first tracks opens at a roar and doesnt relent until the last note is played, while in contrast the second track opens at a whisper and builds very, very slowly. These kinds of dynamic expressions really add a great deal of weight to the music, and keeps the listener riveted and constantly surprised.

Each member of this fantastic trio seems very aware of his role within the group and understands that this role shifts and changes over time they each know when to be propulsive and assume the leadership role and when to lay back and simply follow. Thats what makes this recording so successful and such a joy to listen to. A splendid effort all around and highly recommended."