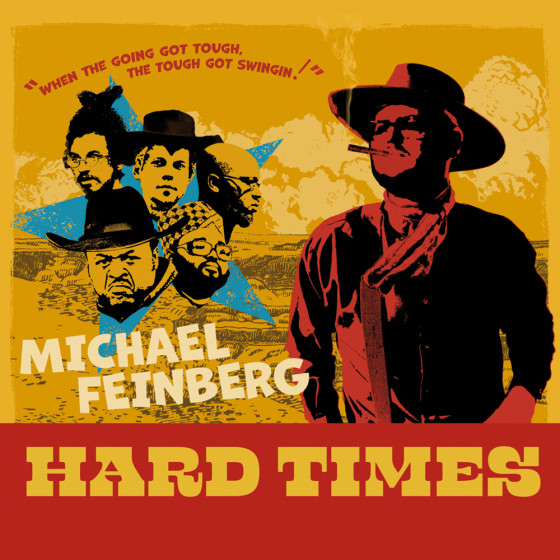 “Michael Feinberg is a very talented young bassist on both acoustic and electric. He is a bassist to keep an eye on, he has the flexibility energy, love of the music and intensity necessary to make a difference NOW!”


"The performances on this album are so good, one can imagine Coltrane's ghost hovering overhead and nodding approvingly."


"A wonderful album of beautifully textured music, and one hundred percent jazz, top-shelf vintage. Pick of the Week."


“Musically, geographically and culturally, this one’s a winner.”

"Bassist/composer Michael Feinberg releases his eight album as a leader, a successful culmination of the challenges and opportunities imposed by the pandemic. He hired a fantastic group of musicians to play some of his own tunes plus four covers, with Miles Davis’ “Nardis” being the most distinguished of them. His rhythmically defiant arrangement of the latter piece, initially handled with a groovy bass figure and hip-hop color in the rhythm, plays with tempo, moods and styles, including hard-swinging passages and sumptuous Latin segments. Besides the energy of Jeff Tain Watts, for whom Feinberg partly wrote his music, there’s also trumpeter Billy Buss’ elegant muted sound.

Feinberg favors a very eclectic writing, and if “Introduction” carries a slick R&B feel with Orrin Evans and Leo Genovese handling the keyboard chores on piano and synths, respectively, “The Husafell Stone” plunges into bouncy tradition while bringing to mind the music of Freddie Hubbard, Blue Mitchell and Hank Mobley. On the latter tune, Watts stretches at the outset, and I admire how Evans handles his improvisation.

While hard-bop is mixed with pronounced gospel tinge to shape the optimistic “Hard Times” (penned by saxophonist David ‘Fathead’ Newman), it’s a Stevie Wonder-esque funky vibe that animates “Janky in the Middle”, where Buss shows his glossy melodic side in opposition to Godwin Louis, whose zigzagging alto arrives with plenty of accentuation and timbral allurement. Both musicians end up having a lively discussion.

Two McCoy Tyner compositions were selected to be included on the track list, with “Walk Spirit, Talk Spirit” standing out through a Latin jazz-meets-rock that suggests Carlos Santana. It features Gabriel Globus-Hoenish’ well-tuned percussion throughout, and a blistering drum solo by Watts at the end.

The music has that enthralling appeal and easygoing vibe that satisfies with aplomb. A positive, energetic response to the hard times."

“Bassist and composer Michael Feinberg issues Hard Times, out on October 22, his eighth album as a leader spotlighting a fiercely integrative sound. At once stark and uplifting, the Fresh Sound release expresses his layered response to the pandemic that, “offered some challenging opportunities,” according to the New York-based artist, who contends Hard Times “is the culmination of those challenges and opportunities.”

Primed for spontaneous expansion, the collection of largely original compositions reflects an aesthetic containing multitudes. “It’s a pretty diverse album in terms of the music,” he says. “It’s pretty eclectic.” Serving as co-producer alongside Jordi Pujol, Feinberg booked David Amlen to record the music at Sound on Sound Studios in Jersey, and Michael Perez-Cisneros to mix and master the album at Big Orange Sheep.

For Feinberg and his collaborators, Hard Times offers room to wail and room to contemplate and, at its core, room to stretch. As a result of the lockdown, he seized an opportunity to assemble a band of perennially touring artists, including Leo Genovese on keyboards and synths, Billy Buss on trumpet, Godwin Louis on alto, Noah Preminger on tenor, Gabriel Globus-Hoenig on percussion, Orrin Evans on piano and special guest Randy Brecker for one texturally lavish, melodious track.

Once he secured Jeff “Tain” Watts for the studio date, Feinberg began composing much of the music as well as the arrangements with the drummer’s nuanced expression in mind. “He’s someone who I’ve listened to for so long and have such deep respect for,” says Feinberg. “I wanted to bring out elements of his playing I really like.”

Partly for Tain, partly in service of his own expression, Feinberg sought to create a groove-driven album that welcomes dualities and apparent contradictions. “A lot of the interest I have in music comes from disparate worlds combining — the order in the chaos,” he says. “Not that it’s always chaos [laughs]; it can be beautiful, tranquil.” Hard Times presents structured concepts of patterns and groove, allowing Feinberg and his fellow artists to respond with an elasticity and a pervading freedom to take scripted music and spontaneous melodies wherever they mean to go. “It creates the tension and release within the ensemble,” he says, “rather than just with the notes on the page.”

From opening colors on track one’s dedication to master forgers Pei-Shen Qian and Rudy Kurniawan, Hard Times reveals inquiry within the music. In addition to his strength and subtlety on the kit, Tain’s attention to leaving and creating space for idea development persists across the album. Through his arrangement of “Nardis,” Feinberg seeks to honor the pivotal apprenticeship gig with Russell Gunn he landed when he was coming up in Atlanta. Full on the low-end, the groove swells and recedes, arcing the music from one section to the next. “Husafell Stone” hits the listener with a fullness up front. Taking the first solo, Evans allows the composition’s syncopated melody to serve as point of origin before Buss delivers his own swinging response.

Twin McCoy tracks “Walk Spirit, Talk Spirit” and “Three Flowers” pay tribute to a recently departed hero of Feinberg’s, the latter piece featuring a dualism is his bass solo characteristic of the entire record: strength in sensitivity. “These performances are intended as a tribute to him, as well as keeping the flame lit for those who love his music,” he says in his album notes. Written as a feature for Louis and Buss, “Janky in the Middle” spotlights the artists’ interplay, offering each opportunities to play with, alongside and against what the other proffers. The resulting dialogue creates smaller arcs in the music that punctuate the movement of the tune. Feinberg has played together with both artists for the past decade and a half. “We have that comfort to take those chances,” he says, “knowing we can find our way back once we get out there [laughs].”

Flush with lamentation, “Every. Damn. Day. (Burn it down blues)” acknowledges and honors the continued generational trauma inflicted on the Black community as a result of racism, police brutality and gun violence. “Lauren’s Song” features another of Feinberg’s beautiful and tender melodies. In his signature language, Brecker speaks in full voice on “Monkeys Never Cramp.” Concluding on a note of jubilance and healing, “Hard Times” features Feinberg’s resonating walk and swinging melodies. He admits, however, he can only make suggestions; in the moment, sound is fluid. “Everything’s always in flux in the music,” he says. “It can go anywhere at any time, and everyone in the band knows that so we’re ready for it.”