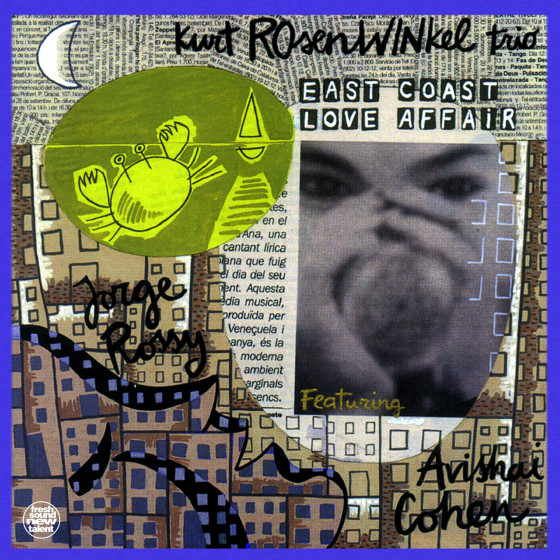 "The best jazz musicians, guitarists or otherwise, do what they need to do, and not necessarily what is most expedient. But to an observer of the jazz scene in 1996, when Kurt Rosenwinkel made his first record, a jazz guitarist could have gone down any of several different routes, or ongoing traditions. Some were old and some were new, but they all had their votaries. Because “jazz” was no longer a monolithic entity to anyone, the jazz-education movement had gotten in full swing, and the information age was just starting, all of these traditions were fairly well-mapped.

More than a little of East Coast Love Affair is historicist-classicist material. It’s a trio with the bassist Avishai Cohen and the drummer Jorge Rossy that was not a working band, though the paths of all three musicians intersected within the general orbit of Smalls; the album was recorded at Smalls, but mostly during the day, so that you can’t hear an audience, though you can hear the club’s intimate dimensions, dry room-tone. It is studious and calm and quiet and full of standards. But is also rich and modern and just slightly volatile. There is a lot going on here.

“Pannonica” and “Round About Midnight” come from Thelonious Monk, whose harmonies have fascinated New York guitarists over the last few decades—Bobby Broom, Peter Bern-stein, and especially Bill Frisell among them. Walter Donaldson’s “Little White Lies” was a pop semi-standard of the ‘30s and ‘40s, the most unusual choice among the older songs on this record.

But Rosenwinkel’s own tunes on the record, “B Blues,” and “East Coast Love Affair”— the two tracks recorded before an audience, that same evening—are its slow, strange, smash-hits. The former is suspenseful and structurally weird, broken up into 21-bar sections. The latter, a 12/8, 32-bar composition, remains one of the best things he’s written. It uses a wider range of his instrument than most of the rest of the record. It is shadowy and full of hesitations, clipped or modest or slightly rough statements; when Rosenwinkel heads into a limited series of virtuosic runs and sprays in the second half of his solo, it amounts to a deviation from the track’s norm of open space and understatement. It is an advanced lesson in moderation."