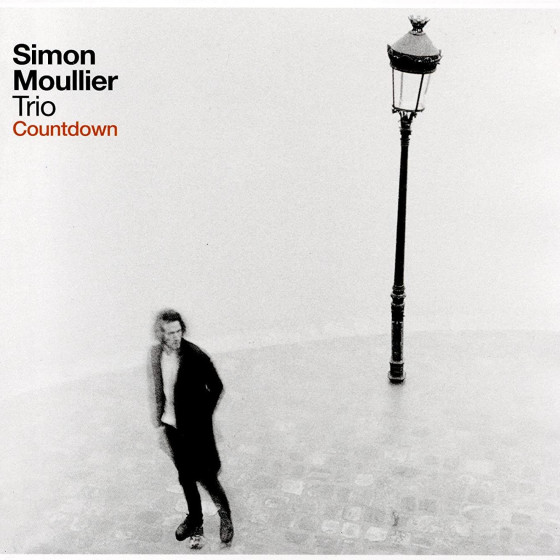 On his sophomore album, Countdown, vibraphonist Simon Moullier ups the ante from the high bar that he set on his impressive 2020 debut, Spirit Song. Comprising separate sessions from 2017 and May 2020, Spirit Song projected what Moullier describes as a “sci-fi” aura, revealing his extreme chops, capacious improvisational imagination, and mastery of the art of molding musical narrative via composition, arrangement, orchestration and production.

Moullier, showcases these attributes on Countdown, an individualistic, erudite acoustic trio encounter with Luca Alemanno on bass and Jongkuk (“J.K.”) Kim on drums. Moullier says, as an homage to “the great composers and pillars of jazz.” [...]

—Ted Panken (From the inside liner notes)

"Why not go all the way? That must’ve been the thought on the mind of vibraphonist Simon Moullier when compiling repertoire for his sophomore album Countdown. Among others, Moullier, bassist Luca Alemanno and drummer Jongkuk Kim present compositions of John Coltrane, Thelonious Monk and Charles Mingus. A sparkling, collective reimagining of gems.

The trio, which functioned as the core of the bigger band that performed on Moullier’s debut Spirit Song, has been cooperating out of New York for a couple of years, evidently to tight-knit and intense effect. It wickedly adapts stone-cold classics to its temperament. As such, complex pieces as Coltrane’s Countdown (especially challenging) and Tadd Dameron’s Hot House develop into a courtship of Moullier and Kim, with Moullier’s crystal clear lines playing hard to get and Kim’s counter-intuitive accents resembling mating calls from a stormy forest. At the other side of the spectrum, the trio adds cane sugar to their crisply swinging Latin bowl of Cole Porter’s I Concentrate On You.

For the talented Moullier it is no trouble at all to put his exceptional amalgam of turnarounds, suspensions and rhythmic figures at the service of expression instead of virtuosity for virtuosity’s sake. What’s more, Moullier’s details add to the magic and elusiveness of the little chapters in his vintage jazz novel. For instance, the gritty Afro-groove reworking of Monk’s Work halfway disappears into the tiniest of tone poems, perhaps one of those passages Arnold Schönberg would put his teeth into a quarter of an hour before lunch.

Another example of Moullier’s effective embellishments is Goodbye Pork Pie Hat. While his extra-slow and soulful cover of Mingus’s classic ballad evokes a loving image of behind-the-beat Lester “Prez” Young, Moullier’s repetitive, hazy soundscape shifts parameters to the kid who is daydreaming at the lake, staring through the reed to the setting sun. Possibly the kid he is referring to was Moullier himself, visualising ways to attain a personal and expressive style in modern jazz.

"Not a second's wasted on Countdown in ten concise covers by vibraphonist Simon Moullier, bassist Luca Alemanno, and drummer Jongkuk Kim. On a set free of dull moments and self-indulgence, the acoustic trio digs into each piece quickly, states its case lucidly, and then moves on. In the choice of material, Moullier pays homage to his forebears, with compositions by Mingus (“Goodbye Pork Pie Hat”), Evans (“Turn Out The Stars”), Monk (“Work,” “Ask Me Now”), and Coltrane (“Countdown”) appearing alongside standards by Porter (“I Concentrate On You”) and Kern (“The Song Is You”). The leader demonstrates exceptional command in his playing, and Alemanno and Kim acquit themselves solidly throughout; the two are never merely passive support to Moullier, but they don't overpower him either."

"Time, and more specifically timekeeping, remains a fundamental component of jazz. Rhythmic signatures frequently form the basis of musical momentum, doubling as the chassis atop which melodic and harmonic development occurs. Countdown is French vibraphonist Simon Moullier’s ode to and exegesis on both the pleasures and perils of time in such contexts. It’s also a follow-up to his 2020 debut, stripped away from the protections of a larger ensemble setting. Bassist Luca Alemanno and drummer Jongkuk Kim are equally dialed in to the cause and the music is an inviting variation on math-minded jazz that never gets lost in the tall weeds of chops for chops' sake.

Moullier picks a particularly challenging prospect as both title piece and opener, John Coltrane’s sticky wicket steeplechase. Velocious and vertiginous, it’s a dizzyingly ornate and accelerated excursion, but all of the moving parts are audible from start to breathless stop. Moullier’s mallets advance the melody and sturdy, swinging braid of Alemanno and Kim matches him at every move. The remainder of the program is a passel of standards, starting with Thelonious Monk’s “Work.” Another finely spun theme statement caroms through an obstacle course of suspensions and deviations. Once again, the three players are in synchronous step, adding accents and flourishes, keeping a close collective eye of the figurative stopwatch undergirding their interaction.

“I Concentrate on You,” “Nature Boy” and “The Song as You” reference different signposts on the songbook spectrum. The trio attacks and devours each of them with undisguised relish. Moullier’s educational background includes studies in classical and ethnic percussion, in part through study at Berklee College of Music. Those early influences contribute not only to his palette, but also a staunch refusal to rely on tropes or gimmicks. It’s an unwritten credo shared with his colleagues with evidence apparent all over these interpretations. Mingus’ “Goodbye Porkpie Hat” is unmistakable and yet still leagues different from the composer’s various conceptions in its bridging of slow burn melodic maturation and incremental rhythmic tension. Time as a resource and measure of expression is most definitely on Moullier’s side.

"Countdown, the quicksilver John Coltrane étude, has a reputation fearsome enough to rival its more famous familial counterpart, "Giant Steps." To record the song at any point in the post-Coltrane continuum is to plant a flag —as have a handful of ambitious souls, from Kenny Garrett to Brad Mehldau to Joey Alexander. Now here's vibraphonist Simon Moullier with an album, his second, named after the tune. What are we to think?

Well, listen first. You'll hear that Moullier has an ingenious set of strategies for breaking up the theme, and the proficiency to make it flow when he so desires. His trio, with Luca Alemanno on bass and Jongkuk Kim on drums, matches every flicker without missing a beat. "I was always curious to find way to create within the confines of these great tunes," Moullier tells Ted Panken in the liner notes. Throughout Countdown, which also includes pieces by Mingus, Monk and Dameron, that curiosity pays off, with interest."

"New music for vibraphonist Simon Moullier, in his second album, Countdown reveals his super-cool skills, capacious improvisational imagination and mastery of the art of shaping musical narrative through composition, arrangement, orchestration and production. Modern jazz with infinite blue notes for this, acoustic trio with Luca Alemanno on bass and Jongkuk ("J.K.") Kim on drums. The tributes to Bill Evans, John Coltrane, Toninho Horta, without forgetting the refined contemporary sound of African American music, always looking forward. Ten tracks and ten ideas to confirm its flexibility. Vibraphonist, composer, producer and bandleader, Simon Moullier has distinguished himself as one of the leading voices of his generation. working with jazz masters such as Herbie Hancock, Wayne Shorter, Jimmy Heath, John Patitucci, Danilo Perez, Gerald Clayton.

This album is a personal statement not only as a vibraphonist but also as an improviser, planning every possible language. Less electronic and more acoustic jazz for a truly intriguing cd, where we find Moullier's ability on vibrations is always a fact, but also his ability to find a rhythm section like that of Alemanno-Kim, impressive able to jump inside and to perform at a high level deserves compliments. Hot House, Beijo Partido and The Song Is You, among the most glamorous things."