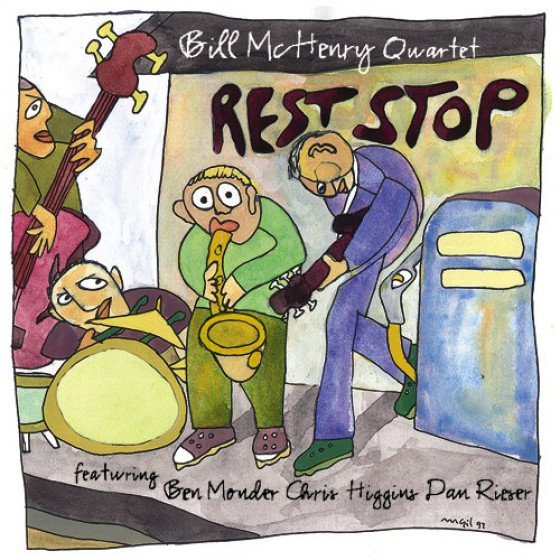 This CD is the recording debut as leader of tenor saxophonist Bill McHenry. As you will discover from the music played here, Bill is a musician creating a contemporary voice with melodic freedom, intricately carried by Ben Monder, Chris Higgins and Dan Rieser.

"Many of the tracks on this record recall the Ornette Coleman-influenced sound of Pat Metheny's 80/81, which features swinging interplay between Metheny and tenor Dewey Redman. Here it is Bill McHenry and Ben Monder who go at it on such tracks as "Hebuwuba," "Silly," "Blues," "No Idea," and "9/12." Monder's sonic choices on "9/12" are a departure, almost resembling early Robert Fripp. McHenry's relaxed, smooth sound owes as much to Stan Getz as to Redman and Coleman.

In contrast to the harmonically open, mid-tempo swing tunes, McHenry offers the mellow "Afterthoughts," the ethereal waltz "Tuxedos," and a bossa nova called "The Sky Bird That Flies Away," which finds Monder playing beautifully on acoustic guitar. "Duo I (Pull Over)" and "Duo II (Rest Stop)" showcase McHenry and Monder without the rhythm section (bassist Chris Higgins and drummer Dan Rieser). The first duo piece is based on eighth-note lines and clearly articulated harmonies, while the second is more experimental, featuring low drone notes from McHenry and odd blips and blasts from Monder."