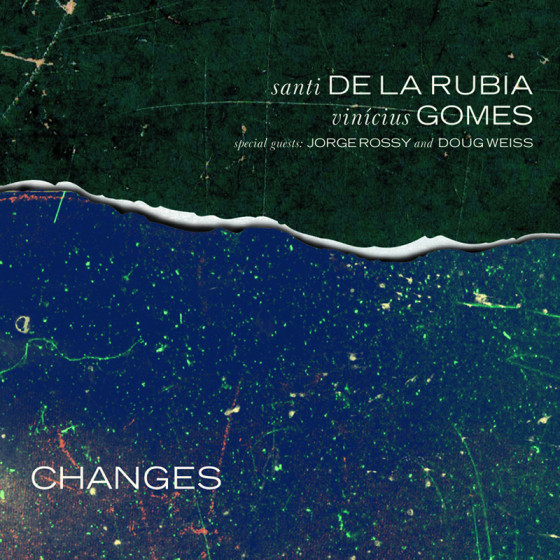 “Change is the only constant.” My aunt and cousin used it repeatedly but it was only in 2018, when I migrated from Brazil to Europe, that I fully understood the meaning of this phrase. I moved in order to explore uncertain grounds, analogous to the ones that we, as improvising musicians, are all too familiar with when playing and creating music together. Experiencing my first real winter, the language barrier and the distance from loved ones forced me to dive into a journey of self-discovery.

During this journey I met Santi and our paths synchronized. Our friendship evolved through countless hours of working together, every day, for practically one year while living in Basel —Switzerland. We have a kind of connection that happens only with esthetic affinity and intense cooperation. As such, we decided to make a record, invited Jorge, who is the combination of a mentor and friend to us, and he brought Doug to form the quartet heard here.

This was the first time that I had another musician’s sound in mind while writing. Because of my great admiration for Santi’s musicianship, I aspired to write melodies and harmonies that would do his musical universe justice. All of my writing for this record is dedicated to, and inspired by, him, explicitly the track “Friendship.” Santi’s compositions here are clear reflections of that universe, an open book showing a blend of strength and gentlemanly behavior, adjectives that apply not only to his music but to his personal character. We also had the fortune of co-writing music for this record, a gratifying experience which I gain greater appreciation for each time it happens.

If change really is the only constant, and so much has changed in our lives and society since this album was recorded, friendship is the thread that reminds us of where we came from and who we are.”

—Vinícius Gomes (From the inside liner notes)

"Santi de la Rubia and Vinícius Gomes are two of the names selected by the Fresh Sound Records to be part of the catalog of the prestigious label's New Talent line. Changes, is the title of the album named in honor of the concept change is the only constant, a familiar phrase that Vinícius has heard repeatedly “I understood the meaning of this phrase when I emigrated from Brazil to Europe. During that trip I met Santi and our paths were synchronized”.

The album, recorded in Basel, stems from the aesthetic affinity and connection between the Valencian saxophonist Santi de la Rubia and the Brazilian guitarist Vinícius Gomes. They worked together to write original compositions accompanied by veteran and mentor Jorge Rossy on drums and vibraphone, and Doug Weiss, a Chicago double bass player associated with names like Al Foster, George Coleman, Lee Konitz, Chris Potter, Brian Blade, Peter Bernstein, and Eli Degibri among others.

"Change is the only constant." This thought, brought by Vinícius Gomes to the lines of the album, is reflected in each of the compositions. Changes is music with synecdoche, broken up, that shows the part for the whole through nuances and exchanges, suggesting, in each block, a remarkable assembly, and making us suspect with certainty, from the first minute, that in the work the changes They give meaning to permanence.

The tour opens with The Crash, a song in which the melody has an air of improvisation. The cuts, the alternating rhythms and the compact fluidity of the solos -some short ones, which could be arrangements- prefigure a texture of strangeness through which the instruments move with virtuosic but also lyrical freedom.

In Black Forest and in Friendship , more relaxed, the same thing happens, although during the dialogue the base sometimes adopts the role of soloist (the double bass, or the variations of the drums when it accompanies the guitar solo in Friendship).

Going back to the idea of ​​changes, as the album progresses, each part of a song seems like another “micro-composition” within the larger one, which would be a sum of several. That exercise of changing melodies, of fusion in the same melodic line -like the introduction of the double bass in Changes- is enriched and makes freedom have its turning point in the solos.

Interlude, commanded by the soprano and the vibraphone, opens the door to a second, refined strangeness, which is maintained in Third Waltz and in Poema de Invierno. At times, the clear improvisations are mirrors or extensions that complete the figure, the proposal of the previous soloist and propose a mold for the next one.

Once again the idea of ​​the parts as a mobile montage, but which gives shape to the whole. Coming Back and Indigo Dreams close a work of nine own compositions. As in the previous ones, the melodies are assembled with the improvisations and reveal a new aspect in that common thread that is the changes: the metamorphosis of the instruments. For example, the piano accompaniment of the strings in Coming Back or the soprano solo in Indigo Dreams, emulating a guitar phrasing.

In this labyrinthine and versatile journey that Changes proposes, everything is transformed, mutated, reborn. That's why the album, when it starts again, is never the same as what we've heard."

"The talented jazz guitarist Vinícius Gómes migrated from his native Brazil to Europe only back in 2018 but quickly developed bonds that fostered his musical growth. His key professional relationship and friendship came about when he met Barcelona-based saxophonist Santi de la Rubia, a bond that blossomed into a collaborative record.

Working together to write originals and assembling a quartet with drummer Jorge Rossy (Brad Mehldau) and bassist Doug Weiss (Chris Potter), Changes is a meeting of two minds and four aces.

We’re premiering a video above of the title track from this album of uniformly high quality. It’s a track that puts a lot of prowess on display starting with a composition that’s deceptive in how well it hides the complexities nested within it, making it easier to absorb and just enjoy without any effort. The litheness that everyone brings to it is a big reason why, starting with Weiss’ opening bass statement.

Gómes' turn in the spotlight features fast but fluid lines while de la Rubia used his time to blow that tenor with the right amount of passion and soaring up with the brief key change. But the best moment occurs right in between those solos, when the two connect flawlessly on a knotted and rapid unison pattern."