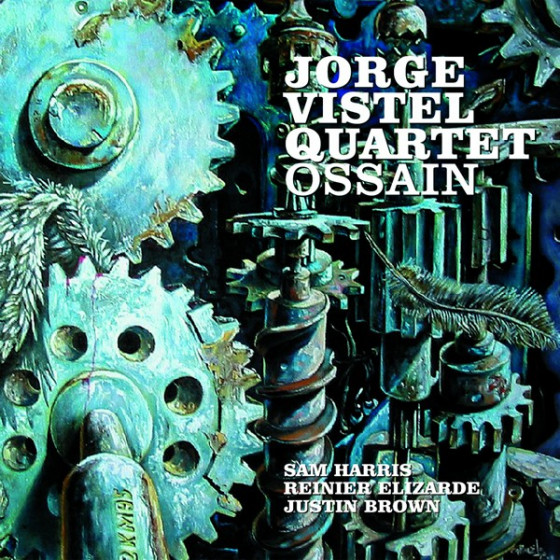 Vital jazz in a constant, deep return to the roots of his own motives to push for the idea of origin, Jorge Vistel unravels his musical restlessness with fertile vehemence. Soon are discarded all preconceptions under the will of Reinier Elizarde and Justin Brown, a team confronted by the original harmonic deconstructions of Sam Harris. This in turn, allows the explorations of the -now free- irate voice of the trumpet, which finds the seeds of the intertwined personalities, lighting up the magic of this rhythmic ritual through which he summons his ancestor, to drink from him the nature of sound.

All music composed by Jorge Vistel

"From what I remember, digging back into long-ago anthropology classes, Ossain is the god of herbs in the Candomblé religion, a powerful orisha who’s regarded with some envy by the other gods. So there’s no surprise to find a mixed air of strenuous healing and contention in Jorge Vistel’s music. The trumpeter’s a Cuban, who used to run a fraternal outfit with saxophonist Maikel, and the Vistel Brothers on their day could give the Breckers a run.

The title track opens on dark drones, freeish piano trills and anxious, almost pained sounds from the leader, which settle slowly into a more confident meditation, like a morning prayer emerging out of nightmare. Once the band’s in tempo on Afra, it’s clear that these atmospheres are going to dominate the whole disc. To my ears, Vistel is reminiscent of some of Leo Smith’s earlier work, declamatory, elided, always telling some kind of story, whether warmly open or tightly muted. Elizarde’s two-beat bass on Delirium Tremens is like a giant stalking through the music. Brown keeps up a rich, shimmering accompaniment on Oscilation. By that point it feels like a proper group recording and a set that follows an almost ritualised course, with the repeat of Ossain not so much an alternate take as a natural reprise and cadence. The urgent Ceremonia, right in the middle of things, confirms the impression.

The rawness and simplicity of the production (Vistel himself) might not work in every context, but it’s fine here. A genuine find, like so many of Jordi Pujol’s enthusiasms."