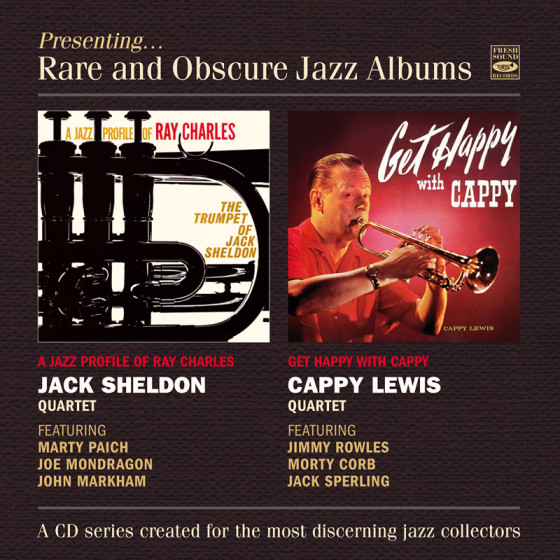 A Jazz Profile of Ray Charles
Jack Sheldon (1931-2019) belonged to that school of trumpet players whose expressive, full, and cool tone was their trademark and prized possession. He originally became known for his involvement in the West Coast Jazz movement of the 1950s, playing and recording with such artists as Jimmy Giuffre, Art Pepper, Curtis Counce, Dave Pell, and Stan Kenton. For years, he was one of the busiest session musicians with big bands led by Quincy Jones, Marty Paich, Johnny Mandel and Henry Mancini. His trumpet performances had also attracted demand from the film industry. This album, 'A Jazz Profile of Ray Charles,' perfectly showcases Jack’s trumpet propulsion playing imaginative and tasteful solos accompanied by Marty Paich on organ, Joe Mondragon on bass, and Johnny Markham on drums. “Jack is playing compositions that, thanks to you,” said Ray Charles, “are closely associated with me, but with the warm and personal interpretation of Jack Sheldon.” Qualities, which fully highlight the essentially lyrical nature of these songs.

Get Happy with Cappy
This album is a unique and exciting collection of performance skills from the great trumpeter Carroll “Cappy” Lewis (1917-1992). A veteran of the swing era, Lewis’ playing will conjure up some happy memories for jazz fans who remember his many solo endeavors with Woody Herman and Tommy Dorsey’s bands. Then after a couple of short stints with other name bands, Lewis settled in Hollywood in 1948, where he devoted himself entirely to working in the studio’s main brass sections. In 1960, thanks to David Axelrod, then a producer for the Hi-Fi Jazz Records label, Cappy’s full throated trumpet could finally be heard in a small group context, in which he exhibits his buoyancy and refreshing style over an impeccable rhythm section enhanced by the subtle and always swinging pianist Jimmy Rowles. On this, his only album as a leader, Cappy blows both hot and cool, applying an engaging trumpet approach to a set of oldies and newer songs, that serve as a nearly perfect showcase of his talent.