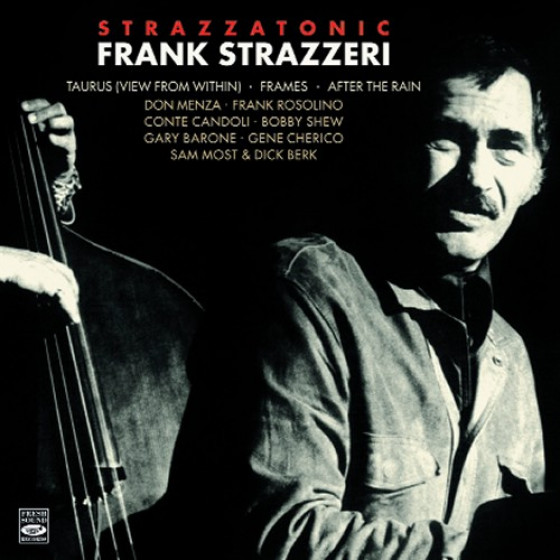 After his arrival in Los Angeles late in 1959, the versatile and impressive work of upstate New Yorker, pianist-composer Frank Strazzeri (1930-2014), began to earn him a fast reputation, and his playing in local jazz groups and on albums by Terry Gibbs, Herb Ellis, Red Mitchell, Harold Land, Carmell Jones and others, didn’t go unnoticed.

An utterly devoted jazz musician, he transformed his many influences, among them Bud Powell, Horace Silver, Carl Perkins, Hank Jones, into an inventive, direct, exciting, cliché-free personal expression, distinguished by an absence of superfluous gesture, and delivered with a crisp, bright sound in medium and fast tempos. And he was also to reveal a considerable talent as a composer on his own records.

On the three albums included here, Taurus (1973), Frames (1975) and After the Rain (1975), he wrote all of the material and used, including Don Menza, Frank Rosolino, Gary Barone, Conte Candoli, Gene Cherico and Bobby Shew, who spoke glowingly of him as “a giant, a master, an incredibly underrated player, a complete genius.” These albums show why he was so revered by his peers.

All compositions by Frank Strazzeri

Co-producer: Pat Britt on “After the Rain”
Recorded and mixed by Jim Mooney at Sage & Sound Studio, Hollywood

This CD is dedicated to the memory of Frank Strazzeri

"The 1970s were a good time to fall in love with jazz. When I was just starting to get into America’s Classical Music, you had fertile jazz ground. The studios were packed with jazzers making a good living, while at night they hung around a ton of clubs like Donte’s, The Baked Potato, Pasquale’s, Carmelos, The Lighthouse and Concerts By The Sea. Each place had a “2.50 night” for students, and you could see guys like Elvin Jones and Kenny Burrell, and LA bands like Supersax and The Akiyoshi-Tabackin Big Band were always playing somewhere, even at times for free at the Ford Amphitheatre. Not only that, but Gerald Wilson taught “Jazz History” at CSUN!!  Where did these glory days go?!?

Here, we’ve got a 2-CD set that recall these glory days. Frank Strazzeri  was also a foundation of the LA scene, subsidizing his jazz life with stints with Elvis Presley (go figure!!!) Maynard Ferguson and Les Brown along with a thriving studio life. Here, he plays the Fender Rhodes piano on three wonderful mid 70s albums.

From 1973, Taurus has Strazzeri calls up LA buds Conte Candoli/tp, Frank Rosolino/tb, Don Menza/ts-fl, Gene Cherico/ and Dick Berk, and the team is beautifully exotic on “Calcutta” and swinging from the chandeliers on the title track. Two years later, only a couple changes take place with Gary Barone/p, Steve Schaeffer/dr and a pair of percussionists deliver what was then called a “hip” session with electric piano, wind chimes, and chord vamps showing the styles of the time, but not sounding dated at all on “Ballad of the Matador” and “Evening In Madrid.”

From the same year, After the Rain has Strazzeri adding moog and string synthesizer along with crisp toned Bobby Shew, Sam most/ts-fl, Harvey Newmark/b, Steve Strazzeri/dr and Don Alias/perc. Most is gorgeous with his flute on “After the Rain” while Alias adds Latin pizzazz on “Blue Dawn” and the white knuckler “Philadelphia.” Shew is brilliant on “Blue Dawn” as Newmark and the rhythm team form a rivulet of groove. These songs have a vibrancy and excitement that is missing today; these artists were creating, not re-creating, and swinging, not navel gazing. Can it happen again? That’s why God invented prayer!"