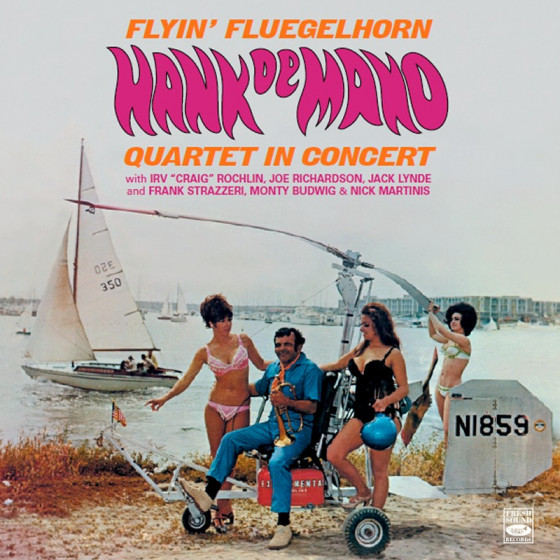 Born in Los Angeles in 1933, Hank De Mano, started playing cornet at the age of nine, but soon switched to trumpet. In 1955 he made his record debut leading a quartet with Don Friedman, piano, Monty Budwig, bass, and Gary Frommer, drums, a promising start in a format he mostly stuck to, with variations, almost always under his own leadership; he was very independent, and seldom played in other groups often. In the early sixties he switched almost exclusively to flugelhorn.

On these admirable live performances his playing is relaxed and warm, his instrumental command making for melodic, solidly constructed solos and fiery uptempo work. Never well known beyond Los Angeles, he was much admired there, notably by pianists Don Friedman and Frank Strazzeri.

Both of these De Mano quartet dates were recorded at concerts held at El Camino College, in Torrence, California. The first in this set in 1966 with the fine Chicago pianist Irv Rochlin —who for a time went by the stage name Irv Craig— bassist Joe Richardson, and drummer Jack Lynde. The second three years before, in November 1963, and it included Frank Strazzeri, Monte Budwig, and drummer Nick Martinis.

These rare quartet recordings will hopefully introduce to new fans the work of a singularly independent talent who disappeared from the jazz scene several years ago.

"I have absolutely no idea how Fresh Sound Records even HEARD of this guy, let alone found material by him. Back in the 50s, Hank De Mano started his career in Los Angeles and was some part of the West Coast scene, working as a sideman for Dave Brubeck and Anita O’Day. He put a group together, playing the flugelhorn and recorded two concerts at not exactly the crossroads of the world; El Camino College in Torrance, CA. A 1963 gig has  him with an impressive trio of Frank Strazzeri/p, Monty Budwig/b and Nick Martinis/dr, and three years later he’s with Irv Rochlin/p, Joe Richardson/b and Jack Lynde. I guess he found his room!

Anyway, his tone is as warm as Art Farmer’s, and his melodicism is up there with Chet Bakers. He is gorgeous and lyrical on”Long Ago and Far Away” and “Lullaby of the Leaves.” On more uptempo material, he flexes his muscles with Martinis and Budwig on “Delilah” and snaps as well as Miles o “Four.” His brass shines on the thoughtful “These Foolish Things” and casts shadows on the two reads of “Summertime.” What happened to this guy?!? This one’s going to scratch your head why you’re not familiar with him. This is the “Where’s Waldo” of horn players!"

Vocalist Tony Clemente and I had a group with Irv, Jack Lynde, John Lasonio in 1968. Hank recorded us with himself and it was purely improv. Hank played well but didn't do many gigs. In 1973, I saw Hank and Gary Frommer at a club I booked in Studio City called The Times Jazz and Supper Club. I lost copies of the tracks but so interesting that Straz and Monty as well as old friend Nick Martines was on some of those recordings and that Fresh Sound's Jordi would find this treasure!

I knew Hank and recorded some tunes with Irv Rochlin (Craig) piano, John Lasonio bass, Dave Berzinski drums, Tony Clemente and me on vocals. Jim Mooney who later began Sage and Sound recorded us in his garage studio in 1968.