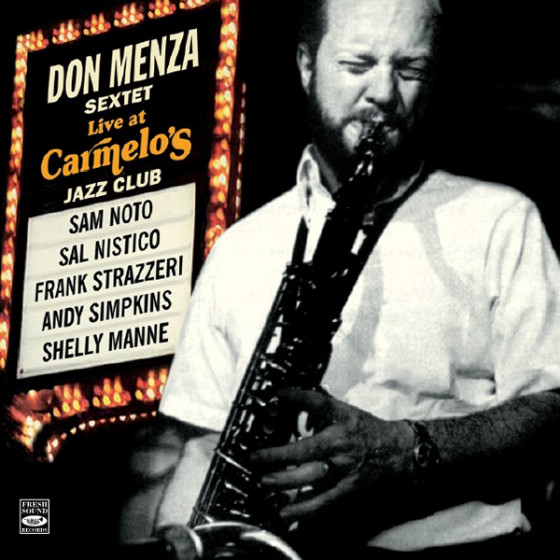 These live performances at Carmelos were a great experience for me. It was a chance to play with some of my favorite players and, as time has proven, they have become jazz legends. Because of the time limitations of LPs, we had to choose from 2 nites of recording and only six tunes were picked for the original LP release. Here are some of the other tunes played on that historic live recording. Sam Noto was in town with the Bob McConnell Big Band. Sal Nistico flew in from N.Y.C. and the rest of us were here in L.A.

Thanks to the efforts of the late Herb Wong (my good friend) we had the opportunity to record the music of Frank Strazzeri and some of my charts. These charts were originally written for trumpet-tenor-trombone, but after the untimely death of Frank Rosolino everything was put on hold. On these recordings I played the trombone parts on baritone and some on alto.

It was curious that all the players on these recordings are from the East coast, and yet everyone considered us West coasters (always thought of as the cool school). As you will hear, these takes are anything but cool. My thanks to Jordi and Fresh Sound for re-releasing these recordings.

"Once upon a time, the LA jazz scene was jumping. In the 70s and 80s, you had a plethora of clubs that had musicians from the studios jamming until sunset; Donte’s, The Lighthouse, Alphonses, Concerts by the Sea, Pasquale’s and Carmelo’s. You had local bands like Supersax and the Akyoshi-Tabackin Big Band, as well as alumni from the big band era. All of these cozy places had a $5-10 cover charge, a 2 drink minimum, a half price for college students, and it supplied me with the best education of jazz a guy could ask for. They’ve all closed down, and the world is worse off as a result.

Fresh Sound Records came across this pair of concerts by saxist Don Menza, who played a muscular set of saxes for Buddy Rich, Woody Herman, Elvin Jones and Louis Bellson. He’s still around and sticks to the tenor these days, but here he focuses on the alto and baritone. Along with other vets of big bands like Sal Nestico/ts, Sam Noto/tp-fh, Frank Strazzeri/p, Andy Simpkins/b and Shelly Manne/dr (Don’t forget Shelly’s Manne Hole as a great jazz dive!) Mena delivers a pair of hard blowing and energetic sets.

Menza’s baritone bookends the sets with a torrid “The Third Eye” and hard bopping 20 minute stretch out on “Tenor Madness.” Everyone gets a chance to blow on the latter, while Nistico roars like a hungry lion here and on “Opas #1.” On alto, Menza floats like a nimbus cloud on “Winter of My Discontent” while his biceps flex the bop chops on “Quasimodo” along with Noto’s hip horn and Strazzeri’s nimble finger work. Noto glows warm embers on flugelhorn on “Opals #2,” while the front line gallops like its’ Saturday at the Santa Anita Race track on pieces like “Steppin’” and “Hip Pocket.” The music throughout is exciting, confident, swinging and boiling over with energy. Every solo has a story to tell, and none of the artists sound like they are reciting lessons from Manhattan School of Music; they are playing from the college of experience, and it is palpable.

Unlike most artists that have albums reissued by Fresh Sound Records, Menza is still alive and well, and you can still catch him blowing hot smoke in an LA club at least once a month or two. Don’t let him pass you by."

Just half a dozen of these appeared as Hip Pocket in 1981, a touch too soon for CD and what might have been fuller documentation of two glorious nights in Jennifer Aniston’s birthplace (Sherman Oaks, rather than Carmelo’s specifically). But, restored, this jumps right up there alongside Shelly Manne’s own extensively documented Blackhawk residency in 1959 and it works equally well to confound the notion that all West Coast jazz was cool and laid back.

Menza is, of course, an Easterner by birth, a Buffalo boy, with an upstater’s air of rugged independence. The peculiarity of these sets is that he’s playing alto and baritone, ceding his usual tenor duties to Sal Nistico, who grew up not far away from the leader, in Syracuse. The reason was that the charts were originally prepared for trumpet, tenor and trombone, but were shelved at the time of Frank Rosolino’s grisly suicide.
Another member of the “Upstate Association”, born Rochester, Frank Strazzeri writes intelligent blowing lines: the two Opals, Don’t Scuffle,The Third Eye and the original title track just the best of them. Menza plays the trombone part on baritone, keeping his alto for the Parker line and a lovely feature on the Alec Wilder Winter Of My Discontent. The set’s nearly stolen by Sam Noto, though. His long, heartfelt solo on These Are The Things I Love is a highlight, and there’s a liquidity to his flugelhorn work on the first Opals that’s unlike anyone else I can think of on the bigger horn.

"Don Menza tried a change of pace on this album, doubling on alto and baritone instead of his usual tenor. He has had the misfortune to record the majority of his dates for now-defunct labels, and this LP will be a bit hard to find. Menza teams up with tenorman Sal Nistico, trumpeter Sam Noto, pianist Frank Strazzeri, bassist Andy Simpkins and drummer Shelly Manne for music that is as swinging as one would expect from these players. They perform Strazzeri's originals, Menza's "Steppin'," an Alec Wilder obscurity, and Charlie Parker's "Quasimodo." Fine modern bop music."