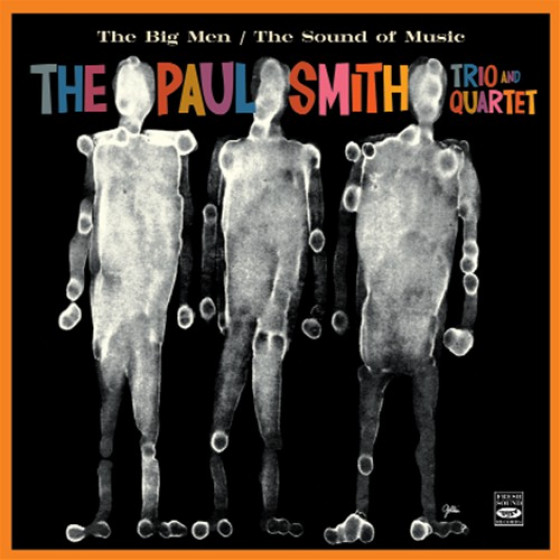 The two enticingly swinging sessions brought together here find pianist Paul Smith in typically well-crafted form, with The Big Men a joyously engaging date in which he is heard performing solo or in a trio. Much skill, considerable feeling, and unceasingly ebullient energy transform this album into a thoroughly listenable program of modern jazz, throughout which his lines show strong classical influence and clear indication of his imposing compositional talent (Theme for Theda). The playing of the trio is crisp and knowing, and there are moments of brilliant musicianship by Smith with the fine support of Vinnegar and Levey, two swingers who keep the pulse vibrant.

On Richard Rodgers Broadway musical The Sound of Music, guitarist Barney Kessels contributions are consistently good, and the rhythm section is unfailingly solid and supportive. Smith, as leader, is utterly relaxed and swinging, while still managing to be viscerally creative in an excellent demonstration of the craftsmanship for which he was noted.

Personnel on "The Big Men":


Personnel on "The Sound of Music":

"There is a lightness and bounce about the Smith trio that is quite attractive on the first eight tracks here. With the always reliable and stimulating support of Vinnegar and Levey, the pianist is well set up to swing along merrily through several standards, blues and a piece dedicated to his wife. The less said about Whos Afraid Of The Big Bad Wolf the better. Smith gives it a fast reading, a slow, a medium, an Erroll Garner pastiche and even a mock rhapsodic build up. The nursery rhyme is too slight to stand up to such treatment but the rest of the programme is well played apart from an occasional lapse into musical theatre type overkill. Smith likes to play solo and there are five tracks where he dispenses with his rhythm mates. The straightahead Big Men disc is the best from a purely jazz point of view.

On the second session the leader has the opportunity to swap choruses with Kessel and the two of them work out some interesting variations on the familiar Sound Of Music material. Kessels solos are superior but he was a seasoned jazz improviser by this time and Smith was just beginning to make a name for himself. The pianist does well with Favourite Things, Maria and No Way To Stop It, which turns out to be one of the best swingers on the entire disc. Kessel is flying high on guitar and his inspired solo work here and on some of the other tracks no doubt brought out the best in the pianist leader. Theres first-class support from Corb on bass and Sinatras favourite drummer, Cottler."

"LA based pianist made a successful living as a sideman for the likes of Les Paul, Tommy Dorsey, but especially Ella Fitzgerald for a multi-decade run before finally leaving us in 2013. He did put out a handful of albums under his own name, and these two from 1959-60 on a single disc are up there among his best.

His 59 trio with Leroy Vinnegar/b and Stan Levey spotlight why so many vocalists sought him out. Hes highly lyrical and melodic on tunes such as The Big Men and Theme for Theda yet can also give extra flavor and style to well known pieces such as Yesterdays and even breath fresh air into Tea for Two. His quartet of Barney Kessell/g, Morty Corb and Irv Cottler/dr delves into the Rogers and Hammerstein classic movie and take a joyful trip on The Lonely Goatherd and No Way to Stop It. Kessel gets some nice solo space here and there, with a nice venture on Climb Evry Mountain and Edelweiss blossoms like a spring morning in Austria. A tasty treat."