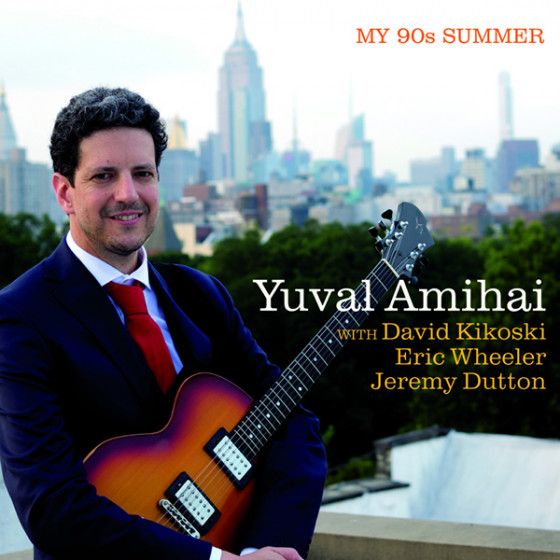 This is my most personal work to date. I grew up in the south of Israel, in a small town located in the Negev Desert. Following my passion for jazz, I regularly traveled long distances to Tel Aviv, Israel’s cultural hub, seeking to learn from the country’s top teachers and performers, attending concerts, and playing in many of the city’s venues with local bands I formed along the way. At the end of each summer, I would travel even further to attend Israel's biggest international jazz festival in the distant city of Eilat. All I wanted was to absorb everything I could about this music.

The music eventually led me to travel from my home country —first by moving to Paris, France, and eventually to the jazz capital of the world— New York City.

This album, which is the fruit of my second collaboration with Fresh Sound Records (after “I Ain’t Got Nothin’ but the Blues” released in 2018), is a collection of 8 original compositions. I wrote these songs as I traveled between places, but never recorded them before. They reflect the diversity of cultures, places, sounds, and people that I had encountered over the years, in the various stations of my life.

And it all began in My 90s Summer.

Special thanks to Jordi Pujol of Fresh Sound Records, and to my partner in life Elza Rechtman for always believing in me and supporting my musical journey all along the way.

And most importantly - thank you, dear listener, for choosing to join me on this journey. I am happy for you to be part of it, I hope you will enjoy the ride.

All songs composed and arranged by Yuval Amihai

"The last decade of the last century is now nostalgia and its offspring are fondly looking back. My 90s Summer is guitarist Yuval Amihai's remembrance of coming of age in Israel. However, it is not a maudlin take on the decade's music and Amihai uses his 20 years of worldly musical experience to reflect upon people and places in his life in a beautifully-put- together program of eight varied originals. A mature guitarist, Amihai is extremely cognizant of his quartet's strengths. Chief among them is David Kikoski, the perfect soulmate for this refreshingly contemporary reminiscence. His keyboard work, especially on Rhodes, is exceptional as he both buttresses Amihai's runs and challenges the rhythm section of bassist Eric Wheeler and drummer Jeremy Dutton to stretch out. The title cut is a relaxing take on the time period and includes beautiful voicings from flutist Itai Kriss and tenor saxophonist Julieta Eugenio for a cool summer breeze before the aptly titled "MEDB (Middle Eastern Desert Blues)" turns up the heat with Middle- Eastern tinge amid modern jazz environs. Trumpeter Wayne Tucker joins Kriss in stylishly understated support of davening guitar. Two memorable, but very different individuals are portrayed next as the hot soulfully suggestive "Gwen's Groove" gives way to an exceedingly gentle interpretation of a "Song for Sacha". Although "Smiles"'s cheery demeanor overstays its welcome, "Yitgaber" is outstanding, an intense but wonderfully melodic septet exploration of a variety of engaging themes. "Coming Through" has Kikoski setting the pace on piano for a jaunty straightahead blues-infused journey while "Saturday Afternoon" is an elegantly pensive study delicately intertwining Rhodes and guitar. Amihai is a strong leader and his 'nostalgia' is original, surprisingly fresh and a joy to hear."