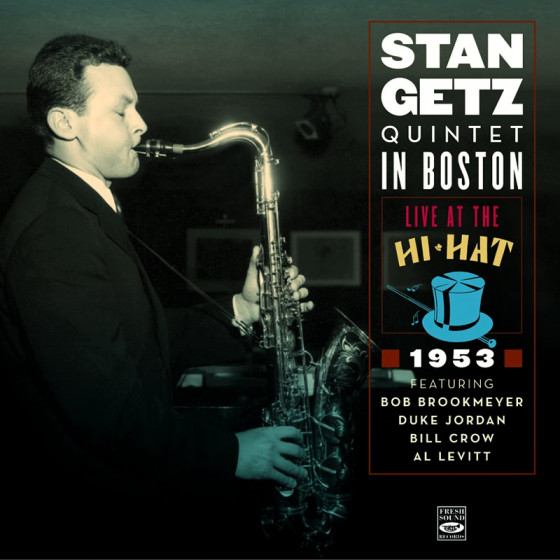 These live performances were recorded in 1953 during one of Stan Getz’s visits to the Hi-Hat club in Boston. Apart from the sheer quality of the playing, these recordings are historically important, because they are the only available that capture one of the first public appearances of the then-recently-formed Getz quintet with valve-trombonist Bob Brookmeyer, here making his debut as a featured soloist.

Getz was 26 and after joining Norman Granz’ J.A.T.P in 1952 he had expanded his sound and developed an even more swinging beat, while still retaining his moving lyrical approach. Jazz enthusiasts, and the many fans of Stan Getz, will be thrilled to hear how the quintet sounded in its earliest days. Jimmy Giuffre summed up his feelings about the quintet in 1961 when he emphatically said “That band with Getz and Brookmeyer is my favorite of all the jazz groups I’ve ever heard.”

"There are just some artists that no matter how much you have, a newly “ undiscovered” recording is still welcome. Let’s be honest for a moment-how excited do you get about a new finding of late period John Coltrane tapes? Same with me.

Not so with Stan Getz. Here’s yet another unearthed treasure from Fresh Sound records, a two disc set that has Getz in a particularly Lester Youngian mood with Bob Brookmeyer/vtb, Duke Jordan/p, Bill Crow/b and Al Levitt/dr. The entire recording is from a single night; the sound quality is acceptable, the notes are filled with background info, and the  music? Well, the music…

Get was only 27 years old and veers between bebop, cool and swooning ballads here. Of the former, “Ornithology” “Woody “n” You” and “All The Things You Are” feel exciting and urgent, as Getz’s patented warm tone starts where Prez leaves off, and Brookmeyer serves as the perfect counterpoint. Cooler minds prevail on the West Coast special “Move” and “Hymn of The Orient” that have lithe groove supplied by Jordan’s left hand. But as with all things Getzian, it’s the ballads that writes the checks. He swoons like Vivian Leigh in a truss during “These Foolish Things” and sighs with resignation on ”Darn That Dream.” The rendition of “Moonlight In Vermont” is as moving as any Puccini aria, while “Stella By Starlight” could be used by Magellan for navigation.

If you want to know what is missing in the sax players of today, just invest a little time on this one and all of your questions will be answered."