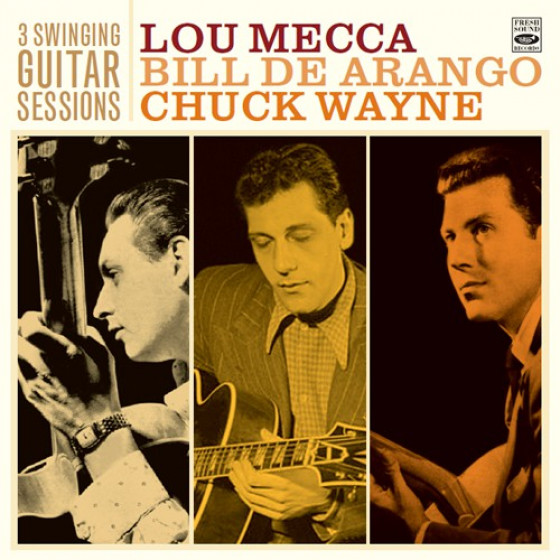 Crisp, inventive and fleet-fingered, Mecca found his own voice from his main inspiration, Tal Farlow, whom he replaced in the Gil Mellé Quartet. Lous classical guitar sound is complemented in this 1954 Blue Note recording by fine vibist Jack Hitchcock, bassist Vinnie Burke and drummer Jimmy Campbell.

De Arango, among the first of the modern jazz guitarists in 52nd Streets heyday, hadnt recorded for a while when he made his album for EmArcy in 1954. His full sound, great swing and consistently imaginative power were in the Charlie Christian tradition, but, as this date proves, he was also very individual. Here, he is backed excellently by pianist Johnny Williams, bassist Teddy Kotick and drummer Art Mardigan.

Masterful as a soloist and rhythm player, Chuck Wayne conclusively proved his worth as a standout member of Woody Hermans First Herd, and in his contribution to the success of George Shearings Quintet. On this excellent 1953 Progressive album with Brew Moore and Zoot Sims he shines with both, achieving a relaxed unity with each. For all who dig guitar, this is a well seasoned group of performances by three articulate and compelling guitarists.

"Once upon a time, the most exciting sounds in jazz and popular music was when the jazz artists stopped screaming at the audience and whispered sweet and intricate melodies to their fans. Here's a recent reissue from Fresh Sound Records to show how to make people listen harder by playing softer.

Before long playing lps, there were things called 10 inch records (the theme made famous by Bull Moose Jackson) which featured a handful of songs by artists. Here, weve got 3 such beauties by cool toned guitarists that seem to be overlooked these years.

Lou Mecca is caught here in a 1955 session with Jack Hitchcock/vib, Vinnie Burke/b and Jimmy Campbell/dr on a lithely swinging session that includes subtle but fervent reads of All the Things You Are and You Go to My Head. Meccas got a clean sound, and it works in great contrast to Hitchcocks chiming work on Just One of Those Things. Bill De Arango was deeply influenced by Charlie Christian, and swings up a storm with Johnny Williams/p, Teddy Kotick/b and Art Mardigan on a 54 studio recording with swift and succinct takes of All Gods Children Got Rhythm and lyrical delights on These Foolish Things and Alone Together. Chuck Wayne made his name with Tony Bennett, and here teams up with tenor saxists Brew Moore or Zoot Sims along with Harvey Leonard/p, George Duvivier/b and Ed Shaughnessey/dr for some easy toe tappers like You Brought a New Kind of Love to Me and Butterfingers.

These three gents emphasized understatement and class, which is a missing ingredient in this day of button turners and pedal pushers imitating guitarists."

"Theres no fat on that title, and it takes in the Tal Farlow-inspired Mecca, the Charlie Christian-inspired De Arango, and Wayne, who contributed both to Hermans First Herd and George Shearings quintet.

Meccas at his most individual on Bernies Tune, while Hitchcocks stylistic distinction is as personal as Lem Winchesters, as per Just One Of Those Things where the two men prove as adept at mood as they are at instrumental colour. De Arangos at his most poetic on The Nearness Of You, although its certainly more generally true that he has a happy knack for making something of even the most overdone material, as per These Foolish Things, where despite his tendency to be ahead of the beat he still manages to extract poignant gold.

The Wayne titles are the most memorable, thanks in no small part to the presence of Brew Moore or Zoot Sims. The deceptive ease of Wayne and Moores unity on You Brought A New Kind Of Love To Me is enough to lift the spirits of all but the most moribund, while Im starting to think there was no musical company that Sims wasnt happy in, such is his calm authority on Prospecting."