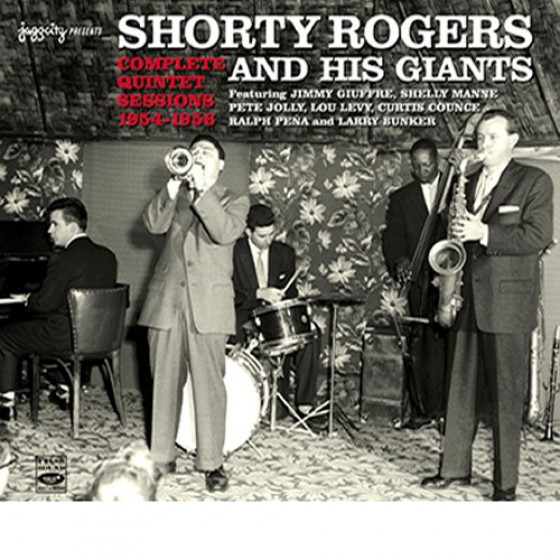 3 CDs + 16-pages booklet with rare and unpublished photos and liner notes by Jordi Pujol especially written for this project.

Before these 1954-1956 quintet sides were produced, Shorty Rogers had already recorded some successful albums with both medium and large ensembles, and that is what established him as one of the most dynamic forces and leading exponents in the modern sounds of Jazz. It was in 1953 he formed his quintet to play the Hollywood Jazz club circuit, and it turned out as an amazing and innovative unit. Listening to these recordings, we fully agree with Nesuhi Ertegun when he said, I know of few examples, in recent years, of such joy and skill in improvisation, of so much vigour and directness of expression, so much freedom and imagination and fun. It is difficult to conceive of musicians more at home in the climate of Jazz than the members of this quintet.


CD 1
This CD holds the first recordings Shorty Rogers did fronting his own quintet the way it regularly appeared at the elegant Zardis, the hottest Hollywood Jazz spot of the moment. After several months of playing, Shorty Rogers & His Giants were fresh and ready to make their recording debut by cutting four tracks with RCA Victor in September 1954. Soon after the date, Shorty signed with Atlantic Records; its vice-president and producer Nesuhi Ertegun proudly said: There exists in this group an instinctive affinity and rapport that can never be duplicated by a band assembled just for a recording session. Martians Go Home is probably the most representative composition of these early quintet sides; a gem of cohesive, subtle and inventive small-group playing.

CD 2
After the success of Martians Go Home, Shorty felt that a new Jazz tune in relation with Mars had to be added to his 2nd album for Atlantic. So Shorty put his Basie foot forward with the quintet on the invitational Martians Come Back. A provocative photo by William Claxton of Shorty with his head encased in a spacemans helmet illustrated the album and became one of the most popular covers of the year. Although part of these quintet recordings were not released on LP until several years later, all of them sustain a high level of musicianship, a constantly pulsing rhythmic drive, thoughtful solos, and an outer space oriented spirit, as far as titles go: Solarization, Planetarium, and two more Martian sequels, March of the Martians, and a minor blues titled Martians Stay Home.

CD 3
The four first sides on this CD were the last Shorty Rogers recorded with his quintet during his Atlantic interim before he returned to RCA Victor. Under his new contract with the Nipper label, and with Larry Bunker replacing Shelly Manne, he recorded a new album, Wherever the Five Winds Blow (tracks 5 to 9). The music is outstanding, with Shorty playing trumpet and fluegelhorn with a consistent feeling for form and a supple beat. Giuffre is at his best on his shy but warmly expressive and distinctive clarinet and his capable and authoritative tenor. The rhythm section sounds well integrated, with some burning solos by Levy. He attacks the piano with a percussive, blues-driven force that is a head-shaking gas. His pungent chordal sense also underlines the striking musical personality Lou projects.