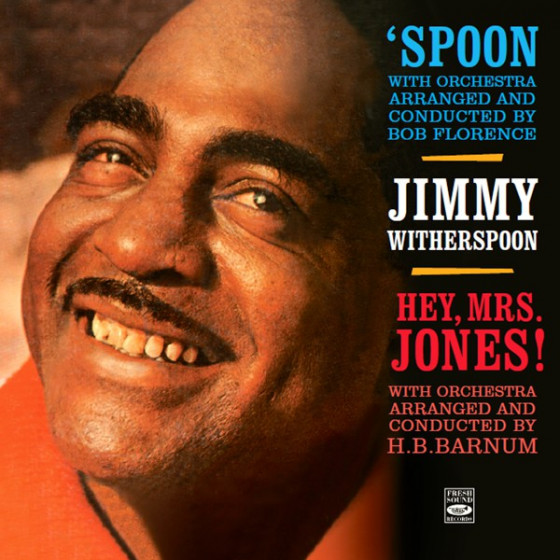 Jimmy Witherspoon was more than just a pitch-perfect blues belter, able to bend a note or a phrase with great expressiveness, with the attack and blues feeling to stamp his individuality on the idiom. He was also blessed with the musicality, taste, sheer jazz feel and lyric smoothness that allowed him to perform persuasively in more sophisticated settings.

Both sides of his musical personality are encompassed in two late-50s, early-60s albums made in stellar company. The first, Spoon, was produced by David Axelrod in 1959 for Hollywoods HiFi Records, but the label cancelled its jazz series before the album came out. Spoon wouldnt see the light until 1961, when Reprise took over the master and released it. It was a great two-date session featuring a swinging all-star orchestra arranged and conducted by Bob Florence, and with such soloists as Teddy Edwards, Gerald Wilson, Lanny Morgan and Gerry Wiggins.

Reprise later recorded Hey, Mrs. Jones!, giving Witherspoons forceful, vigorous and exuberant voice an excellent backing by the fresh, deft arrangements of H.B. Barnum. In a wide-ranging program strings and rhythm feature on some pieces, and a brassy big band on others, with Spoons vocals garnished by good solos from tenors Harold Land and Ben Webster. Together, these albums amply show the range of one of the greatest of all blues singers.

"Reprise issued three albums by Witherspoon and here are the first two, though the first was actually recorded for the Hi Fi label and sold to Reprise later. The Hi Fi people had previously experimented with a departure from Witherspoons customary blues territory by recording him singing 11 spirituals; their studio sequel, called simply Spoon, was a second total avoidance of the blues with a programme of mostly familiar standards. It was a year and a half after this date that Reprise recorded the singer for themselves, returning him to a mixture of blues and largely blues-related material. Although it seems none of the two dozen tracks was issued as a single their length is that of jukebox material; only three last for more than three minutes and eight last for less than two and a half. This means that the instrumentalists dont get much of a look-in and limited advantage is taken of the presence of three outstanding tenor players. However original notes do helpfully name the soloists in their brief appearances.

Witherspoon had a fine, distinctive voice and irreproachable rhythm and intonation. If I find his interpretation of famous standards less than convincing thats connected with something as intangible as a lack of sincerity. Whereas Joe Turner sang with a total lack of artifice, Witherspoon seems to me a more self-conscious performer, throwing in the occasional touch of near hysteria like pepper on bland food. He was a commanding blues singer but unable to communicate the complex emotions required for more demanding material. That is of course an entirely subjective response and any readers fond of Witherspoon may find this release both interesting and rewarding."

The program on Spoon, of course, is mostly standards, with Witherspoon doing a wondrous job in his readings of "Lover Come Back to Me," "Ain't Misbehavin," "It Only Happens Once," and "A Blues Serenade." In addition, his takes on Duke Ellington's "I'm Beginning to See the Light," "Do Nothin' 'Til You Hear from Me," and "Just a Sittin' and a Rockin'" are startling interpretations. The arrangements here, by Bob Florence, are colorful, and just large enough to highlight Witherspoon's open baritone. The contrast between the orchestra's pop-jazz leanings and Witherspoon's bluesy swing are sometimes hair-raising. The strange reverb sound that comes across in Collectables' CD remaster is a bit irritating, but this is the only way this brilliant session is available on compact disc. This is one of those recordings that offers a true starting point for the mature Witherspoon at the absolute top of his powers as a song interpreter and singer supported by a deeply sympathetic orchestra."

"One of the many unfairly overlooked albums from Witherspoon's early career, Hey Mrs. Jones is a marvelous discovery, although its lack of stylistic unity, whilst showing Witherspoon's versatility, also accounts for a occasionally confusing listening experience. The best cuts on the album are priceless Witherspoon -- "The Masquerade Is Over" contains one of Witherspoon's most emotional and desperate performances, while "Have Faith" is a great gospel song, sung with genuine fervor. The album is marred slightly by a few novelty numbers, and it's hard to see anyone listening to "Pink Champagne" or "Lovey Dovey" many times, but this is a slight criticism of an album which is still one of Witherspoon's greatest."


"Posers come and posers go (such as Michael Bubbles, but we wont mention names) but they all pale when compared to the real thing, and the real thing is Jimmy Witherspoon. He could shout the blues, milk a ballad or croon a love tune like no one else. Here are some sessions, from 1959 and 1961 that define what a MAN, and not some pasty skinned, tight jeaned and man-bunned pansy, is supposed to sound like.

Hes teamed here with a mix of big swing bands and bands with strings, which include Gerald Wilson/tp, Lanny Morgan/as, Al Viola/g, Ben Webster/ts, Dick Nash/tb, Gerald Wiggins/p Land/ts and Mel Lewis/dr. Except for the commercial Hey, Mrs Jones, everything here is bona fide blues, which means its either about a) not wanting to sin b) wanting to sin c) sinning or d) sorry that you sinned with some lady. After a gorgeous intro, he belts out Lover Come Back To Me, and then delves deep into the dark recesses of KC blues wailing on A Blues Serenade and Wee Baby Blues. Wonderful emotions of regret drip on Music, Maestro, Please and Dont Worry About Me, while the Spoon gives a sermon on If You Live the Life, You Pay the Price. Of the love tunes, he will make you swoon on Well Be Together Again while getting in your face on I Aint Mad At You. In other words, he covers the waterfront of real life, and makes it sound real. This is blues how its supposed to be swung. WHEW!"