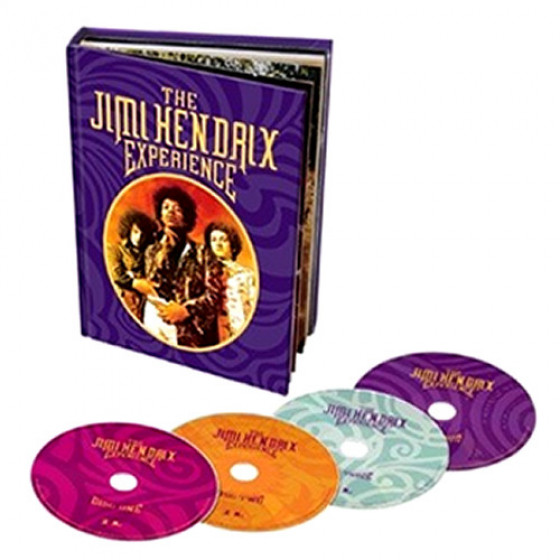 The Jimi Hendrix Experience legendary “Purple Box,” which Rolling Stone’s David Fricke proclaimed “The Rolls Royce of posthumous Hendrix sets” has earned RIAA Gold Album sales status in the US and has enjoyed widespread critical and commercial success throughout the world. This new four CD box set, includes the entire original edition in addition to four tracks eagerly sought by fans of the legendary guitarist.

First released in 2000, The Jimi Hendrix Experience box is sequenced in chronological order, beginning with the first known recordings of the Jimi Hendrix Experience in October 1966, and continuing through the recording of his groundbreaking studio albums as well as a variety of transcendent performances, and ending with the artist’s final multi-track recording session at New York’s Electric Lady Studios in August 1970.

The new edition of The Jimi Hendrix Experience –which includes all the alternate versions of classics like “Purple Haze,” “Foxey Lady,” “Bold As Love” and “Little Wing” and stunning, unheard Hendrix music such as “It’s Too Bad” and “Country Blues” contained in the original 2000 box– offers fans additional new tracks either previously unreleased such as a commanding performance of Bob Dylan’s “Like A Rolling Stone” from Hendrix’s unforgettable October 1968 performances at Winterland in San Francisco. The original recording of “Peace In Mississippi” from the October 1968 sessions at TTG Studios, previously available only as the b-side of the 2010 “Valleys Of Neptune” single is a welcome addition to the collection as is a rare, recently discovered 1967 performance of “Burning Of The Midnight Lamp. The original UK single mix of “The Stars That Play With Laughing Sam’s Dice,” now makes its US debut as part of this special collection.

"The Hendrix family continues its reissue campaign with the release of The Jimi Hendrix Experience, a lavish four-disc box set that should be a boon to Hendrix collectors everywhere. With a beautiful 80-page booklet, and purporting to have 46 unreleased tracks, further inspection actually reveals less than meets the eye, at least for collectors.

The problem is that real collectors have already heard most of this material, and not only through bootleg sources. Many of the previously unreleased tracks are just new mixes of live tracks that were issued as part of Stages, Live at Monterey, and Lifelines. Also included is a new mix of the "Gloria" single. While the sound quality is somewhat better (handled by the expert Eddie Kramer), the new mixes do not differ substantially from the earlier versions. With the inclusion of virtually all of In the West, and a few quality tracks from Rainbow Bridge and Crash Landing (without the wretched mid-'70s overdubs), The Jimi Hendrix Experience almost seems like a shelf-clearing exercise, taking care of the leftover tracks that fans have been clamoring for en masse.

The real highlights of the set are the early studio outtakes, presumably from the cache that Chas Chandler withheld from Alan Douglas for so many years. Interestingly, one of the most enjoyable aspects of these studio outtakes is the control room banter that takes place. There isn't a ton of it, but there are some highly enjoyable moments. At the end of "Purple Haze," Hendrix starts to giggle and throws in "Mary Had a Little Lamb." The version of "Third Stone From the Sun" has Chandler and Hendrix's recording of the spoken bits used on the song, tacked on to the beginning. It's great to hear Hendrix cracking up throughout their interstellar conversation.

Another moment subtly hints at the frictions that were to end up dissolving the Chandler-Hendrix partnership. After seven minutes of take 21 of "Bold As Love," Hendrix is heard to say, "let's try it one more time, alright?" to which Chas Chandler dejectedly replies "oooohh."

The book itself is wonderful; all tracks are fully documented and annotated, with lots of photos, many previously unpublished. There are also recording studio log sheets, newspaper articles, poster/flyers, and Hendrix's handwritten lyrics reproduced. All in all, The Jimi Hendrix Experience is a fine addendum to the Hendrix legacy, but not the place to start; this is a set for someone who already has the studio albums and can't get enough of his genius. The disappointment a hardcore collector might feel at having heard most of this material already should be outweighed by the beautiful, warm sound achieved by Eddie Kramer and the general high quality of the package."