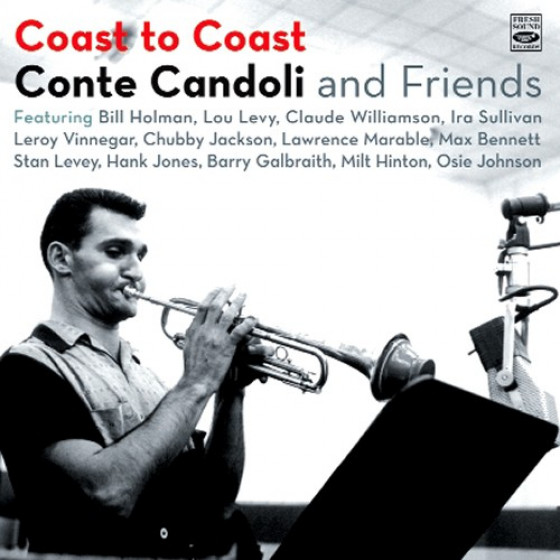 The numbers on the enclosed two CDs are perfect examles of the modern jazz referred to earlier and, except for the first two themes, all the tracks were recorded not long after Conte Candoli had arrived in the Los Angeles area to set up home.

The first CD includes his recording debut in Chicago as a leader of a combo -with Bob Winn, Ira Sullivan, Gene Esposito, Chubby Jackson and ex-bandleader Tony Papa- originally issued on a 78rpm disc on the Chance label. It also includes a quartet date featuring pianist Claude Williamson, bassist Max Bennett and the great Steve Levey on drums. This exciting jazz session was the first one recorded by Bethlehem Records on the West Coast, far from its home base in Manhattan.

The Second CD here includes an unbeatable rhythm section made up of such West Coast luminaries as Lou Levy, Leroy Vinnegar and Lawrence Marable. The version here of "Lover Come Back to Me" has a fine blowing session feel to it, where the group really stretches out and the rhythm section shines, just as it does on "Four" and "Groovin' Higher". On the last four tracks Candoli is backed by what is known as "The New York Rhythm Section" (FSRCD 371). They play "T.N.T.", an up-tempo tune by Conte's old friend Tiny Kahn, that smacks heavily of the blues. However, there is not nearly enough space here to comment on all thirty tracks in this excellent collection of Candoli-led groups. Every listener will no doubt have his or her own preference from this record, which features an excellent cross-section of his playing capacity.

"For over 40 years, Conte Candoli was one of the major bebop trumpeters based in Los Angeles. He recorded in a countless number of settings, but not all that often as a leader. Coast to Coast is a perfectly conceived two-CD set that has all of his recordings as a leader from his early days. There are two numbers with his short-lived Chicago band of 1954 (which includes tenor-saxophonist Ira Sullivan), originally released as a single for the Chance label. Candoli's two Bethlehem albums are here, along with a quartet date with pianist Claude Williamson, and a quintet outing with tenor-saxophonist Bill Holman (an underrated improviser who became a full-time arranger) and pianist Lou Levy. The same group is heard on a rare album originally put out by Atlantic and the final four numbers, only previously out on samplers, were recorded for Epic. Throughout these historic and very musical dates, Candoli stakes his claim as a major bop trumpeter of the 1950s who was underrated due to settling on the West Coast. Highly recommended."