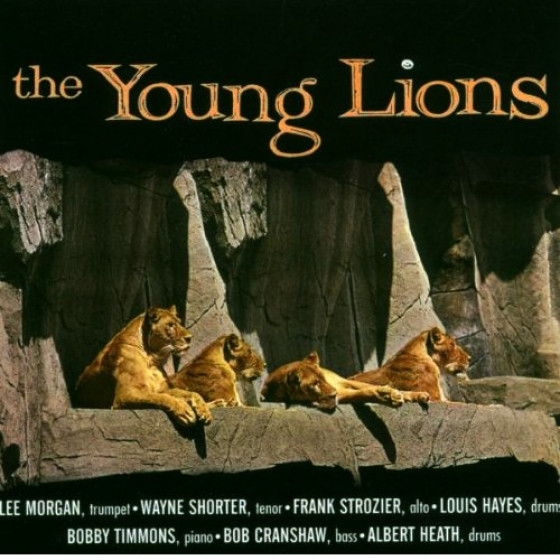 At last the legendary Vee Jay recordings are being released on CD with the best possible sound. During recent years these classic jazz albums have appeared on CD in different countries, in compilations that mixed mono and stereo masters, with errors in the titles and a variable sound. Now, this present edition has been carefully chosen from the best sources, and each track has been digitally remastered in 24-Bit high resolution. These CDs represent a real treasure for jazz fans all over the world, and we feel certain that they will enjoy them.

"Irvin Shaw wrote the novel The Young Lions from which this all star post-to-hard bop all-star band took their name, launching the moniker of a generation of Wynton Marsalis-led followers in the '80s. Wayne Shorter on tenor sax, Frank Strozier on alto sax, Lee Morgan on trumpet, Bobby Timmons on piano, Bob Cranshaw on bass, and either Louis Hayes or Albert "Tootie" Heath (sic as "Tuttie") on drums comprise the original Lions, a one-shot band who set the standard for the Blue Note-Riverside-based players who would follow in their path. There's a true democratic, shared value and responsibility evident in every sonic phase of this recording, but it is Shorter who wrote all the material. His "Seeds of Sin" is a sweet, swinging shuffle full of original harmonic thought. "Scourin'" (sic as "Scourn'") displays a head-nodding swing inspired by quarter-note walking bass courtesy of the unflappable Cranshaw, and wondrous sax-trumpet unity. Timmons' huge, funky piano chords lead to all three horns strutting joyously in melodic agreement during "Fat Lady"; the solos perfectly display the individualism of Shorter's piquant tenor, Morgan's brash trumpet, and Strozier's slightly strained alto before a brief trading of fours with the unidentified drummer. Shorter's tenor is up front, with Morgan on the second melody and Strozier following along for the tightly structured "Peaches & Cream," which is not a team effort until the very last note. Over 11 ½ minutes, "That's Right" proffers an easy, bluesy 12-bar swing in a jam vehicle, with Timmons as pied piper, the horns shouting out in unison, chord punctuations from the pianist, and doo wop accents for the solos. Morgan uses a mute, and Shorter's tenor is fluid as a country stream. There are three alternate takes: A fourth try of "Seeds" is five seconds longer and not only sweet, but a little sour; on a third rendition of "Scourin'," the 35-second bass intro is omitted as Shorter's tenor digs right in and less unison is evident; and with an extra 24 seconds, the third taping of "Fat Lady" only differs in solo content. This is a classic, and one every modern jazz fan should have. The liner notes, written by Cannonball Adderley, are also priceless; they discuss the "glorification of mediocrity," a rip on Dick Clark, country-pop, comformity, and railing against modern jazz naysayers. The notes also include other poignant observations that still ring true today. Interesting reading, ultimately interesting music."