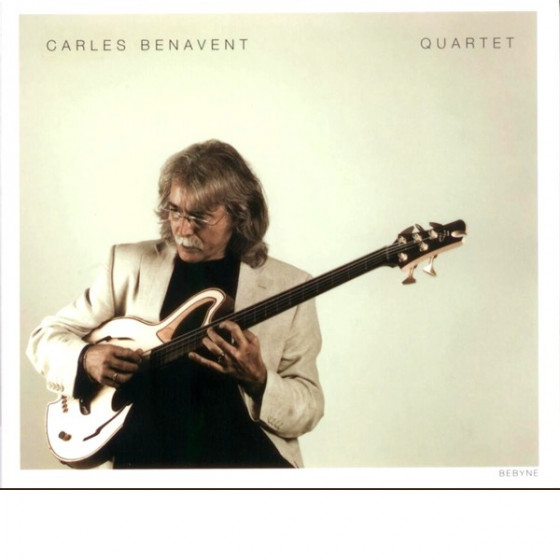 Benavents new record represents a new period in his long artistic career, with a new band and fresh and powerful new songs. His amazing virtuosity and control of the bass, is mixed with the Mediterranean flavor and the sound of Flamenco, all together rounded by the hang.

Quartet shows the importance of the band in this new Project, with a compact sound of the rhythm section, very well balanced between improvisation and groove sections. Each song is based on a flamenco rhythm style (palos), but with the freedom of jazz, the strength of rock, and world music influences.

For the unconditional fans of Benavent, the album includes a bonus track featuring Jorge Pardo, in a wonderful duo piece.

All compositions by Carles Benavent, except track #10 by Angie Benavent.

Carles Benavent is one of the most acclaimed Spanish musicians, a world class bass player who has performed and recorded with Miles Davis, Chick Corea and Paco de Lucía, and the biggest names in famenco music like Camarón de la Isla.

He is widely known, not only as a jazz famenco bass player, but also as the creator of the famenco bass style itself. During his 25 years of collaboration with Paco de Lucia, he forged that unique style of playing now widely recognized by the flamenco bass community. International critics have said that Carles Benavent became for the flamenco style what Jaco Pastorius became for the jazz style.

He started his musical career being part of the key fusion bands that emerged in Barcelona during the 1970s: Máquina, Música Urbana, etc. In 1980, he begins to perform with Paco de Lucía touring Europe, America and Japan, a collaboration that will continue until 2001.

In 1982, he meets Chick Corea and records two albums (Touchtone, Again and Again) and tours all over the world. They do another recording again in 2005 with the Touchstone Band: The Ultimate Adventure, with Steve Gadd, Vinnie Colaiuta, Hubert Laws, Airto Moreira, Hossam Ramzy, and Tim Garland.

In 1991, he plays a special concert featuring the music of Gil Evans with Miles Davis, among others, and an orchestra conducted by Quincy Jones at the Montreux Jazz Festival (Miles Davis and Quincy Jones Live At Montreux, Warner Bros.)

One of his most prolific bands has been the trio with Jorge Pardo and Tino di Geraldo, still active, which received the Spanish Music Academy Award for the Best Jazz Album of 2009 (Sin Prececentes).

If Jaco Pastorius was the best electric bass player in the world, we can say the same about Carles Benavent in Spain, and famenco music on the bass.

Traditional Spanish audiences were initially reluctant to welcome the electric bass to the flamenco arena, but after playing with Paco de Lucia and Camaron de la Isla, Benavent has been admired and respected also by the purists.

Catalan bass player Carles Benavent enchants Egyptian audiences at the Al-Sawy Cultural Wheel on the banks of Nile in Zamalek [...] How fortunate we are in Cairo to give ear to the extraordinary Carles Benavent Quartet.