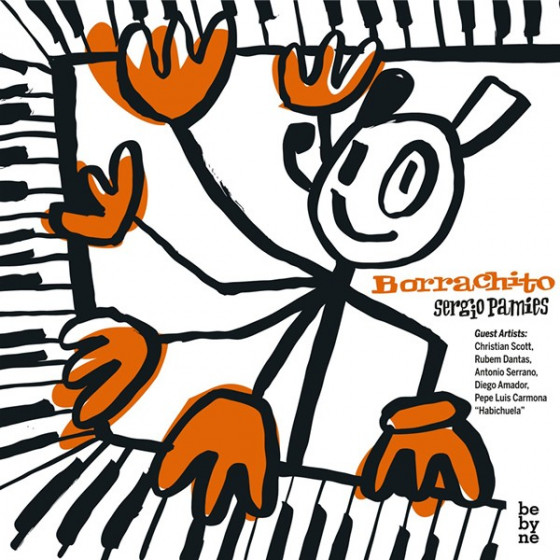 The album begins with Borrachito (Tipsy), the title song of the disc, allowing the key of the very personal synthesis of jazz and flamenco to enter, a synthesis that characterizes this artist. The song is a very catchy one in which the piano improvisation supports the subtle and exciting background of hand clapping, cajón, and drums. The elegant voice of José Cortés The Pirate creates a perfect counterpoint that finishes with an exhilarating celebration by way of the bulerías: borrachito, borrachito/ tu amor a mí me tiene borrachito (Tipsy, tipsy/ your love has got me tipsy).

Borrachito is followed by Ask Me Now, an inspired Hispanic arrangement of the standard by Thelonius Monk, balancing the classic bebop of saxophonist, Víctor de Diego and trumpet player, Julián Sánchez, with the Latin percussion of Rubem Dantas and Benjamín Santiago El Moreno.

The tension builds with the touching soleá about the street, Kendolph, a composition that pays tribute to the first works of flamenco-jazz, but with a truly soleá meter, in which the lyricism of the improvisations (especially those of the saxophone and trumpet) and the spectacular arrangement set the bar very high such that the typically Gypsy voice of Pepe Luis Carmona Habichuela weaves in a song both modern and jondura: quisiera ser prisionero/ de la cárcel de tus labios/ y cumplir toas las condenas/ que nos echen por amarnos (I wish I were a captive/ in the prison of your lips/ to endure all of the punishment/ that they inflict on us for loving one another).

A change of palo brings us to the Alegrías de la Paquita, demonstrating that all of the genres of flamenco lend themselves to the piano without losing even an ounce of its purity or authenticity. It follows the rumba dedicated to the legendary bar in Granada, remembering the smoky quality of the Eshavira with an overdose of swing that culminates in a surge of percussion by Gonzalo de Val, El Cheyenne, El Moreno, and José Aponte.

In order to calm the spirits a little, the album next leads us to a bolero, a genre in which the pianist and the magnificent singer, Sergio Gómez El Coloraíto, having already shown themselves to be great experts (with Amnesia), in this case play Cuando dos personas bailan (When Two People Dance). This composition by Sergio Pamies himself depends, moreover, on the collaboration with one of the greatest harmonica masters worldwide, Antonio Serrano, who alone is truly impressive. Indeed this bolero might have merited an entire album of its own.

The following song is a super Latin version of Isfahan by Duke Ellington, in which, after its oriental introduction of distorted piano, the cajón of Rubem Dantas and the batá drums of José Aponte weave a complex plot under the pianists surging interpretation of this little-known song by Ellington. The battle between piano and tenor sax finishes in a mysterious flute riff, whose original roughness and dissonance possesses an attractive sort of insanity, not unlike the style of Hermeto Pascoal.

The powerful Estado de ruina allows the young trumpet player, Julián Sánchez, to shine once again with his virtuosity, which is answered by none other than the virtuosic piano playing. The response is that of a solo which incorporates a percussive waterfall of notes and chords in the ternary rhythm and flirts with the styles of Ketama and Bill Evans, as well as with that of free jazz.

The finale of the disc would have to be Fandango en Boskovice, a ballad whose ingenious melody lends itself to the interpretation alla Miles Davis, when fate should have it that none other than Christian Scott himself would appear at this moment, a musician that is, for many, the clearest successor of Miles Davis in the new generation of trumpet players, and who lacked precisely some type of Sketches in Spain in order to complete his collection. The duel between both musicians, which combines the vocals of el Pirata and el Coloraíto, is an incredible display of improvisation, unequaled in its execution of the theme. The mood seems intended especially for Scott, who seems to launch his twisted trumpet at the challenge of reinventing the universal language of jazz and flamenco with his unmistakable whisper technique.