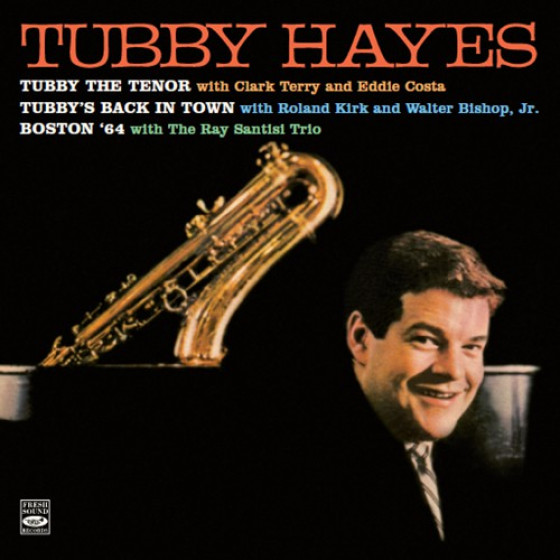 The arrival of English tenor saxophonist Tubby Hayes in New York during the autumn of 1961 caused a sensation in American jazz circles. The first British jazz soloist to ever make a guest appearance in a US club, his opening night at the Half Note was attended by figures including Miles Davis, Al Cohn and Zoot Sims, with Metronome describing Hayes as a swinging ambassador from Britain who definitely can hold his own in fast company. At the end of his visit Hayes recorded the album Tubby The Tenor for Epic Records, leading an all-star unit including trumpeter Clark Terry and vibraphonist Eddie Costa.

When he returned to even greater acclaim in June 1962, to play a further season at New Yorks Half Note club, Mercury Records producer Quincy Jones took the opportunity to record Hayes in the company of the Walter Bishop Jr. trio and guest saxophonists Roland Kirk and James Moody, resulting in the Smash album Tubbys Back In Town. The record received a 4 and a half star review in DownBeat, with journalist Harvey Pekar declaring Hayes performance proof that he was capable of giving many well-regarded US tenor players a run for their money.

This release includes both the Epic and Smash albums and adds a previously unreleased recording of Hayes made with pianist Ray Santisis trio in Boston in 1964. It also comes complete with an overview essay by Hayes biographer and fellow saxophonist Simon Spillett.

Note: Tubbys Back in Town, was issued in England as "Return Visit!" (Fontana TL5195)

"It must have been a great feeling for Tubby on the first of these three sessions, playing as leader with musicians he had long admired and then finding that they had just about as much respect for him as he for them. There is no doubt who is in charge from the opening blast off on You For Me with that great rhythm section purring behind him.

Tubby plays with fire, vigour and swing throughout and his sound is unique and easily distinguishable from Moody and Kirk on the second set. He launches into Clark Terrys A Pint Of Bitter with as much relish as if he were sinking one at home in London, blowing the blues with considerable invention. Costas vibes shine out on three tracks and Parlan is a tower of strength on the first 10 selections.

On CD 2, Moody has a sound inspired by Lester Young and Kirk is as always completely fresh and original; at one point he contributes a solo with a reedless tenor sax, sounding like a French horn crossed with a trombone - Tubbys description at the time. Hayes blows a bop solo of power in which his personal sound shines through. Along with the Tempo quartet session of 1959 and the Mexican Green LP from the late 60s, these NYC tracks can be counted as the very best of Britains Little Giant.

The Boston tapes are from a radio broadcast and are issued here for the first time. Tubby is lyrical on Nobody Else and bright and burgeoning on Terrys Opus Ocean. In reply to Herb Pomeroys question about the perception that only Americans can play jazz although he is an exception, Tubby takes the opportunity to sing the praises of fellow Brits Ronnie Ross, Jimmy Deuchar and Ronnie Scott. The CD ends with a personalised uptempo charge through Rollins Sonnymoon For Two. Essential music!"