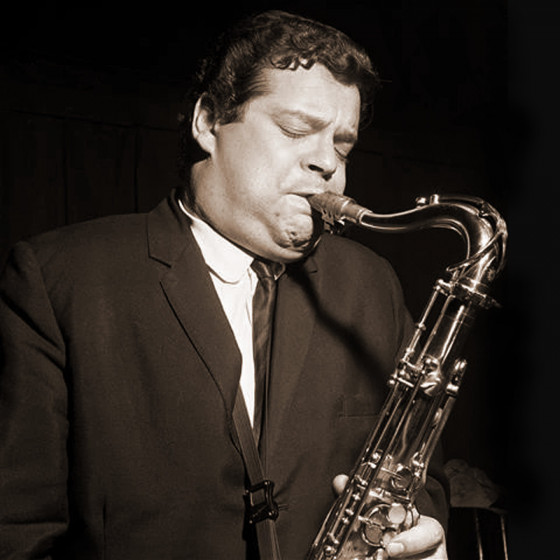 Nicknamed "The Little Giant", English saxophonist Tubby Hayes was an excellent hard bop and modal stylist whose solos were dynamic, expertly articulated, and intricately constructed, as well as expressive and imaginative. In addition to saxes and woodwinds, he was also an highly skilled arranger, composer, and an accomplished vibraphonist. He was a dazzling, highly acrobatic player who drew as much criticism for his virtuosic flurries of notes as praise. A ubiquitous presence on the 1960s and early-'70s British jazz scene, he died at age 38 in 1973. His influence, now undisputed, has made him the standard bearer for British jazz during the 20th century. His traveling forays into America may not have registered in the jazz press as much, but he was revered by virtually every jazzman on the other side of the Atlantic who heard or played with him: Among them Quincy Jones, Ella...

Nicknamed "The Little Giant", English saxophonist Tubby Hayes was an excellent hard bop and modal stylist whose solos were dynamic, expertly articulated, and intricately constructed, as well as expressive and imaginative. In addition to saxes and woodwinds, he was also an highly skilled arranger, composer, and an accomplished vibraphonist. He was a dazzling, highly acrobatic player who drew as much criticism for his virtuosic flurries of notes as praise. A ubiquitous presence on the 1960s and early-'70s British jazz scene, he died at age 38 in 1973. His influence, now undisputed, has made him the standard bearer for British jazz during the 20th century. His traveling forays into America may not have registered in the jazz press as much, but he was revered by virtually every jazzman on the other side of the Atlantic who heard or played with him: Among them Quincy Jones, Ella Fitzgerald, Charles Mingus, and Duke Ellington. He was deeply admired by Miles Davis, Dexter Gordon, Cannonball Adderley, Art Pepper, and Sonny Rollins. Hayes, along with saxophonist Ronnie Scott, co-led the Jazz Couriers during the late '50s. The saxists and trumpeter Jimmy Deuchar singlehandedly changed the face of England's jazz landscape which, at that time, had consisted primarily of dance bands from the '30s on. After the split, Scott started his legendary club -- opening night featured Hayes' new band -- and Tubbs established himself as a prolific musician; he led quartets, quintets, and sextets, as well as big bands. He had his own television series and amassed a vast canon of albums from 1955 onward for a slew of labels including Tempo, Fontana, Spotlite, Epic, Smash, and Mole.

Hayes was born Edward Brian Hayes in London. His father was a BBC studio violinist and traveling dance band leader. Wishing to instill his love for music in his son, he gave him violin lessons from an early age. By the age of ten, Hayes was playing the piano, and he started on the tenor sax at 11. The youngster fell in love with jazz thanks to his dad's record collection and European radio that was playing recordings by bebop pioneers such as Dizzy Gillespie and Charlie Parker. After playing with various semi-professional bands around London for a time, Hayes left school and started playing professionally at age 15. In 1951, at the of 16, Hayes joined Kenny Baker's sextet, and subsequently worked with bandleaders such as Vic Lewis and Jack Parnell. He was already a sophisticated arranger, and penned charts for the bands he played in as a teen. In 1955, Hayes formed his own octet, with which he toured the U.K. for 18 months. He took up vibraphone in 1957, having tried Victor Feldman's instrument during a gig. Although the vibes were a key instrument in his arsenal, he eventually tired of playing them. From 1957 to 1959, he joined Ronnie Scott in co-leading the Jazz Couriers quintet. They became the hottest property on the British jazz scene at the time and recorded for the Tempo label. Despite their relatively short tenure, their influence is still felt in the 21st century.

After the Jazz Couriers split, Hayes formed his own quartet, and toured Germany. In 1961 he received an invitation to America to play the Half Note Club in New York City as part of a Musician's Union exchange that brought American saxophonist Zoot Sims to England to play Scott's club. In America, Hayes recorded Tubbs in NY with Clark Terry, Eddie Costa, and Horace Parlan. He returned in 1962 and cut Return Visit with James Moody, (pre-Rahsaan) Roland Kirk, Walter Bishop, Jr., Sam Jones, and Louis Hayes. He played at the Half Note again in 1964, and at the Boston Jazz Workshop the same year. He traveled to the West Coast for the first time in 1965, playing a multi-night gig at drummer Shelly Manne's Manne-Hole in Los Angeles.

When at home in London, Hayes was a hotly debated commodity among critics, but was beloved by the record-buying public. Given his ubiquity in concert halls on tour and on television -- he hosted three different television programs between 1961 and 1963 -- his biographer Simon Spillet wrote: "Tubby faced almost as much criticism within the press as he did praise, most of it centered upon his technical ability…both a yardstick against which to measure others and, all too often, simply a club with which to beat him….He also suffered from something we appear to have somewhat of a gift for in this country: taking someone apart for doing nothing more than being superbly accomplished at what they do."

In addition to television, Hayes also worked in film and on radio, penning and arranging scores, commercials, and songs. In 1964, he subbed for Paul Gonsalves in Duke Ellington's orchestra and in 1965 recorded with the saxophonist on Just Friends, and later Change of Setting.

Hayes appeared in films too, including All Night Long with Charles Mingus and Dave Brubeck, with his own group in A King in New York starring Charlie Chaplin (1957), and The Beauty Jungle (1964). He also a regular at European jazz festivals form the U.K. to Spain to Italy, Vienna, and Berlin. He appeared on a number of soundtracks at in 1965, notably on Lalo Schifrin's score for The Liquidator, and appeared with his quintet in the anthology film Dr. Terror's House of Horrors. His section, "Voodoo," found his band performing behind actor Roy Castle, who played a jazz musician. A three-track EP from the soundtrack titled Voodoo Session was released by Trunk Records in 2009.

Though he was already a prolific recording artist under his own name, Hayes also found time to guest on recordings by other British jazz musicians, including the Harry South Big Band, the Ian Hamer Sextet, and Ted Heath’s Orchestra. Among his many studio credits, Hayes led the brass section on the sessions for Music in a Doll's House -- the 1967 debut album by Family -- that also featured string and brass charts by a young Mike Batt, who lionized Hayes. Batt credited Hayes with saving his brass arrangement on the track "Old Songs for New Songs." When the arranger realized he had inadvertently notated parts in the wrong key, Hayes and his colleagues, realizing his mistake, discreetly transposed their parts by ear so that they would match the backing track. That same year, Hayes' quartet released what is arguably (yet widely) regarded as his finest offering, the album Mexican Green for Fontana, which was issued in 1968. Hayes was lucky in continuing to record and tour, but times were tough. Given the rise of commercial rock & roll, jazz became marginalized in Great Britain and, a little later, in the U.S. as well. What was thought to be his final recording session for the year was with his big-band's The Orchestra project -- a more commercial outing aimed at pop and easy listening audiences; it featured sophisticated charts for covers of hit songs by the Beatles, Burt Bacharach, Nancy Sinatra, Fifth Dimension, and others. Released by Fontana as catalog number 6309 002 in 1970, it fared poorly. Hayes, a longtime drug addict and alcoholic, began to experience severe health issues. He underwent open-heart surgery and a long period of recuperation. He started performing again in 1971, and in 1972 toured Norway and Sweden. In 1973, after suffering faltering health again, he underwent another heart surgery but expired on the operating table.

In all, Hayes' discography as a leader and/or sideman encompasses more than 400 albums. Unfortunately, many of those recordings -- up to 100 -- didn't appear until long after his passing. In 2017, Spillett's acclaimed The Long Shadow of the Little Giant: The Life, Work and Legacy of Tubby Hayes was published by Equinox in the U.K. and received good reviews on both sides of the Atlantic. In 2019, two major events took place that further expanded the reach and influence of Hayes' legend. The first was the appearance of the documentary feature film A Man in a Hurry directed by Lee Cogswell and written by Mark Baxter. The second was the release of a holy grail of jazz, Hayes' album Grits, Beans and Greens: The Lost Fontana Studio Session 1969. The rediscovery came about when late jazz writer and Polygram catalog manager Richard Cook spotted entries in Hayes' diary that detailed several recording sessions. He found the 1969 tapes in the archive. Cook left the company in 1997, and it was only in 2018 that their existence resurfaced. Decca/Universal hired high-end vinyl specialists Gearbox Studios to master the sessions for the first time. In July 2019, before the film's commercial appearance, Gearbox issued the set in various configurations: As a 180-gram vinyl edition created by using a '60s-era Studer C37 tape machine and a Scully Lathe (the very same model used by jazz engineer legend Rudy Van Gelder), and as single- and double-compact disc editions. In an interview Spillett said "It really is a lost masterpiece, make no mistake....It's hard to believe that this music has lain unheard for 50 years, it's so fresh. There's no doubt in my mind that had they been issued at the time, these recordings would have been seen as Tubby's last great album."