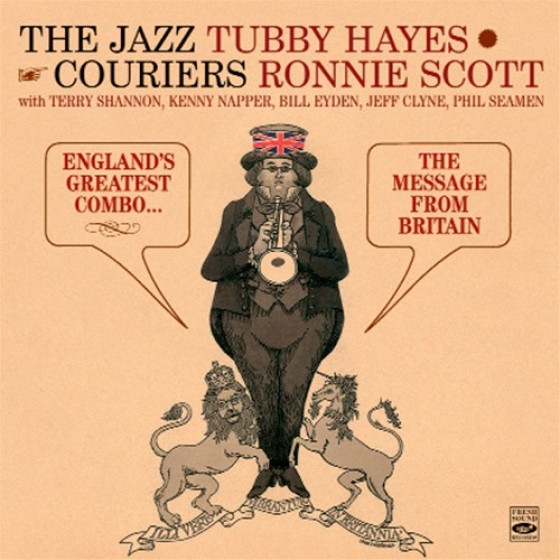 In April 1957 the formidable British tenor men Tubby Hayes and Ronnie Scott teamed up to form a group which they called The Jazz Couriers. During their more than two and a half years together, the Couriers developed into an extremely close-knit unit, widely acclaimed throughout Britain and the rest of Europe.

Tubby Hayes (1935-1973) was born in London, the son of a violinist who started him on that instrument. Switching to tenor at 12, he began playing in jazz clubs when he was 14, and at 16 launched into four years with various name bands. He doubled on vibes, baritone and flute and acknowledged Sonny Rollins and Johnny Griffin as major influences.

Ronnie Scott (1927-1996), one of the early leaders of the modern jazz movement in England, was also a Londoner with a big-band background. His main influences were Charlie Ventura, Charlie Parker, Stan Getz, Sonny Stitt and Sonny Rollins.

Crisp, accurate, inventive and irresistibly swinging, The Jazz Couriers not only boasted of two of the top solo horn players in Europe in Scott and Hayes, it also had the advantage of having a superb rhythm section in which the contribution of master pianist, Terry Shannon, was outstanding.

"The Jazz Couriers were co-led by the two great tenorists you hear on this disc. Their extraordinary compatibility, not to mention mastery, both of their instruments and the modern idiom of their day, produced performances of conviction and authority.

Two rhythm sections appear here: Jeff Clyne, bass and Bill Eyden, drums replaced later by Kenny Napper and Phil Seamen. Its probably fair to say that the latter team have the edge, if only because of Seamens distinctive contributions.

The piano chair is held throughout by Terry Shannon, not in the same league as his leaders but with a nice turn of phrase in the right hand. His left-hand chordal work, however, is very basic and unimaginative.

So, what makes the band significant is the brilliance of the horn players, their astonishing empathy, their use of arranged passages that fuse seamlessly with their improvisations and the ability to add tonal variety via Tubbys equally impressive vibes and flute playing. The repertoire is drawn mainly from golden-age standards, although there are three attractive Hayes originals and one from Scott.

There were many other excellent musicians around at that time but I believe this group marked the coming-of-age of Britains modern jazz."