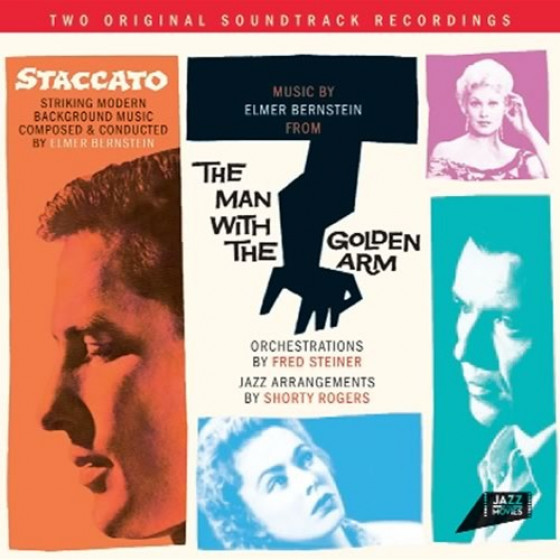 Jazz in the Movies

JAZZ IN THE MOVIES presents the most celebrated scores by the composers that introduced jazz to motion pictures and television soundtracks. In addition to providing a superbly appropriate setting for dramatic scenes, all the jazz background themes were interpreted by many of the best Hollywood and New York jazz studio musicians.

-Music from "The Man With the Golden Arm"

"No need to worry too much about the origins of these two sessions. Although composed and played specifically for a movie and a television series, the jazz shines through and most of it will stand as music for just listening to under any circumstances. The first session, made for the Johnny Staccato television programmes featuring a jazz loving private tec, features some striking trumpet solo work throughout by Pete Candoli. A small group within the big orchestral setting plays several tracks with typical trumpet and sax solos supported by rhythm section. The Jazz At Waldos is a standout piece, as you might expect; jazz-club swinging stuff this, with Shelly Manne prominent in the rhythm section and as soloist. One Before Closing and MacDougal Street Special come across very well as small-group jazz combo selections with Kessel and Candoli playing crisply in solo.

Slightly less interesting is the atmospheric music composed by Bernstein for the Golden Arm film, which readers of a certain age will remember as a feature for Frank Sinatra and Kim Novak. Sweeping strings underline some of the sad moments in the movie and the dramatic ones have the theme blasting out in heavily accented chords. Manne is once again heavily featured, playing well as he provides the drum sounds and pulsing syncopation of the main theme to emphasise the main characters ambition to become a jazz drummer. The theme is catchy and will bring back memories of the film as it appeared in the 1950s. Shorty Rogers has some good moments on flugel, Manne is all over the score from beginning to end and the central Clark Street theme is memorable if only because it repeats so often it becomes ingrained in the brain! This is two LPs on one CD but if in any doubt I would suggest it is a good buy for the Johnny Staccato music alone."

"A few months ago, I stumbled across some very cool soundtracks from 60s Juvenile Delinquent movies such as College Confidential and Crime in the Streets that had guys like Maynard Ferguson and Conte Condoli in the studios delivering some wonderfully moody and hip sounds. The Spanish reissue label Fresh Sound Records just put out a couple more of these delights, and theyre even better!

This CD has music conducted and composed by Elmer Bernstein, the man who gave us the famous Great Escape and Magnificent Seven theme songs. This time, he goes deeper into the darkness with arrangements by West Coast cooler Shorty Rogers and delivers the definitive 50s sounds on the definitive 50s jazz movie, The Man With The Golden Arm, which included a stellar performance by Frank Sinatra. The band is completely all star: Rogers/flh, the Condoli Brothers/tp, Buddy Childers/tp, Frank Rosolino/tb, Bob Cooper/ts, Jimmy Giuffre/bar, Pete Jolly/p, Lou Levy/p and Shelly Mann/dr are just a sampling of the names that blow dry winds on tunes such as Frankie Machine and The Fix. The unforgettable theme song weaves in and out of many of the tunes, and since Sinatra is playing the role of a drummer, Manne gets to be spotlighted in order to display just how stylish and versatile he was.

Johnny Staccato, which featured John Cassavettes, was just as sinister, with the likes of Red Mitchell/b, Larry Bunker/vib, Barney Kessel/g and Milt Bernhart/tb in an orchestra that is the music version of film noir on Night Mood and Walk a Lonely Street. This stuff needs to be revised by todays cats!"