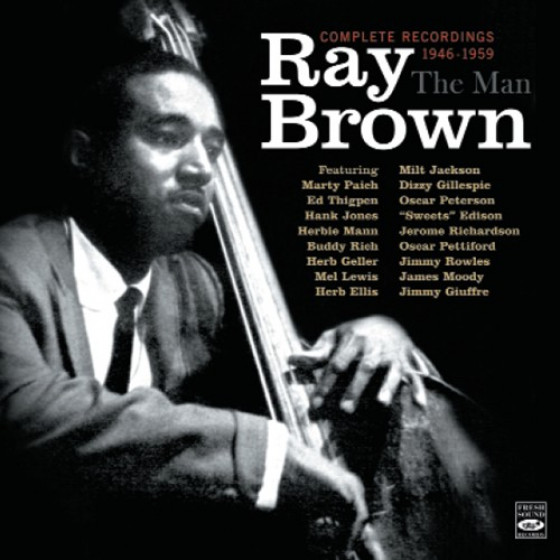 Ray Brown had not reached his 19th birthday when he arrived in New York in 1945 and made an immediate impact as a member of the Dizzy Gillespie Quintet. The following year he was part of the memorable Gillespie big band that included James Moody, John Lewis, and Kenny Clarke. More or less simultaneously, Brown and the late Oscar Pettiford became the first significant representatives of the bass in the bebop revolutions first generation. The second stage of his career as a nationally known artist lasted from 1948 to 1951, when his own trio accompanied Ella Fitzgerald (then Mrs. Brown). The third, of course, began in 1951, when his alliance with Oscar Peterson turned out to be one of the happiest and most durable in modern jazz. This set contains all the recordings he did as a leader, from his early be-bop days in the Forties, to the late Fifties, when every jazz poll considered him the top bass player in the field.

"Out-of-print for a long time, Ray Brown's earliest date as a leader features him prominently in the solo spotlight with arrangements by Marty Paich. They collaborated on a swinging original blues, "Blues for Sylvia," and the snappy "Blues for Lorraine." The rest of the release concentrates on familiar standards, with the addition to the reissue of several complete and incomplete takes of "After You've Gone," which didn't appear on the original release. The supporting cast includes the cream of the crop of musicians living on the West Coast at the time: Jimmy Rowles, Harry "Sweets" Edison, and Jimmy Giuffre among them."