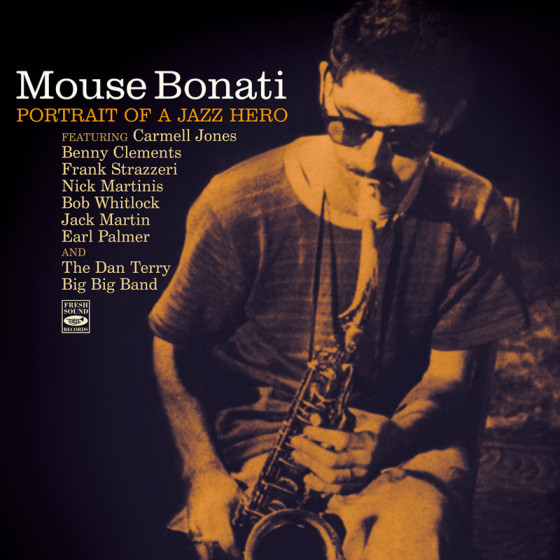 Portrait of a Jazz Hero

Joe “Mouse” Bonati was arguably one of jazz history’s most-underrated alto saxophone players. Today his name remains unknown to many and is completely ignored by jazz dictionaries and encyclopedias.

This skilled altoist was born in Buffalo, NY, in 1930. His career was interrupted several times due to being arrested, and later convicted, of drug possession, forcing him to change cities frequently to continue working as a musician. He moved to New Orleans in the early 1950s, where he became involved with a group of hungry, young musicians in its emerging modern jazz scene. In 1955, he made his recording debut with Jack Martin’s Octet, followed by his first-and-only recordings as the leader of his own sextet–both for the tiny local label Patio Records. On these rare and rather excellent sides, we can enjoy Bonati’s fiery passionate bebop alto sax style, fluent in the Bird tradition, and his tasteful and relaxed –but no less intense– groove on the ballads.

From then on, Mouse’s reputation grew quickly. At one point, he was even considered by Dizzy Gillespie for a place in his band in Louisiana, but the authorities stopped him from playing as he was on probation.

He moved around the country for several years before settling in Las Vegas in 1972. There, he played in show and jazz bands like the Dan Terry “Big” Big Band, with whom he made his last recordings in 1981. This unsung jazz hero died of cancer in 1983, and with this release, we hope to give Joe “Mouse” Bonati the recognition he deserved as one of the great alto saxophonists of modern jazz history.

“Many years have passed since these recordings were made, and, though Mouse is gone now, those of us who knew him and admired his talent are saddened by his lack of recognition and will be grateful that, at last, he will be heard. In this world of jazz there have been many unsung heroes–you will now hear one of them.”

“What a great alto player Joe ‘Mouse‘ Bonati was. I got to play with him a bit when I lived in Las Vegas, Nevada in the early to mid 60s. Joe was a serious Bird-influenced player, energetic, humorous, fun-loving guy. I never heard or owned any of his recordings, didn’t even know they existed.”

“I met him in Vegas. He played baritone on a month-long gig we had with the Louie Bellson big band at the Desert Inn (which is no longer there) in the early-or mid-1980s. I was really impressed by his playing.”

"Joe 'The Mouse' Bonati isn't widely known among most jazz fans. The saxophonist died in 1983 at age 53 after spending his latter years playing in Las Vegas. Born in 1930 in Buffalo, N.Y., Bonati had a less-than-desirable childhood and found solace in the alto saxophone at age 14. Two years later he was playing locally professionally.

Bonati's first recordings were made in New Orleans in 1955. For whatever reason, Bonati found tranquility in narcotics. Arrests followed and he wound up moving often, from city to city, to escape the law and find work. He managed to play with the Frank Strazzeri Quintet on Frank Evans' Frankly Jazz TV show in Los Angeles, in 1962. There were a couple of recordings with Rick Davis at Dusty's Playland in Las Vegas in 1975 and on Davis's Meditations on the Zodiac in Las Vegas in 1976. His last known recording was with the Dan Terry Big Big Band in 1981, which had a book of arrangements by Gene Roland.

Now, Fresh Sound has pulled together all of Bonati's recordings that feature him soloing for a new release: Mouse Bonati: Portrait of a Jazz Hero. The compilation is superb, with excellent sound and detailed and illuminating liner notes by Jordi Pujol, who said he was turned on to Bonati by pianist Frank Strazzeri.

Based on my additional research, Bonati first stopped playing early in 1981 following a diagnosis of throat cancer. To help Bonati with his $2,000 in hospital bills and the cost of therapy, friends in Las Vegas threw him a benefit in the spring of 1981. He had recuperated sufficiently to play aggressively on the recording of Dan Terry's band in the fall. But the cancer returned and his home town of Buffalo held a benefit for him in November 1982 at Sam Noto's Renaissance II. Bonati attended with his wife, Diane, and their family, but he did not participate. At the event, Bonati reminisced about his years in town in the late 1940s at a club run by Tony Bafo and said that in Las Vegas, he most often backed singer Billy Eckstine.

Hats off to Jordi for gathering and packaging the material, including the never-before released audio of the Frank Strazzeri Quintet on Frankly Jazz, featuring Carmell Jones (tp), Joe "Mouse" Bonati (as), Frank Strazzeri (p), Bob Whitlock (b) and Nick Martinis (d)."