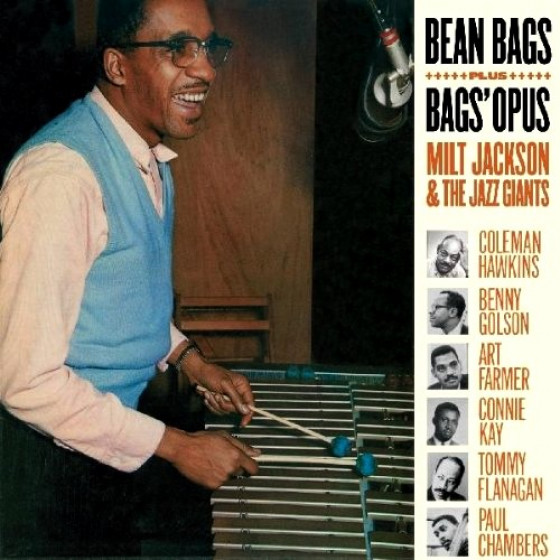 This release contains two outstanding consecutive albums in their entirety presenting Milt Jackson in the company of jazz stars such as Coleman Hawkins, Benny Golson, Art Farmer and Kenny Burrell. Tommy Flanagan is the pianist and Connie Kay is the drummer throughout all of these swinging tracks.

"Many of vibraphonist Milt Jackson's Atlantic recordings are long overdue to appear on CD, and that certainly includes Bean Bags, which features a meeting with the great tenor Coleman Hawkins. Assisted by a top-notch quartet (pianist Tommy Flanagan, guitarist Kenny Burrell, bassist Eddie Jones, and drummer Connie Kay), Bean Bags romps through "Stuffy," "Get Happy," a pair of Jackson originals, and two fine ballads, with "Don't Take Your Love From Me" being particularly memorable."


"This album shows how tired material can be transformed by two masters and four above-average jazzmen into something interesting. The transformation is in the result of sheer excellence of improvisation."

"Vibraphonist Milt Jackson welcomes the two future co-leaders of The Jazztet (trumpeter Art Farmer and tenor-saxophonist Benny Golson) along with a fine rhythm section (pianist Tommy Flanagan, bassist Paul Chambers and drummer Connie Kay). The repertoire (which includes early versions of Golson's "Whisper Not" and "I Remember Clifford" in addition to two standards, a Milt Jackson blues and John Lewis's "Afternoon in Paris") is very much in The Jazztet hard bop vein and Jackson fits in very well with the two lyrical horn soloists. A successful outing by some of the greats."


"This is a happy conclave of eloquent individuals, each of whom possesses an impressive jazz vocabulary with which to say his piece."