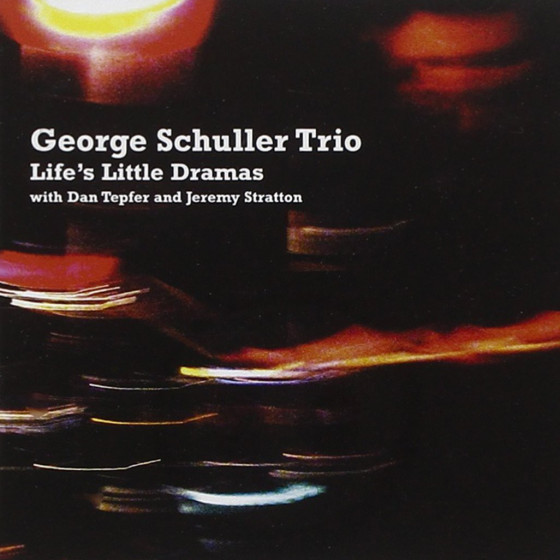 George Schuller is one of those drummers who can drive a band with power and finesse, blending in to an ensemble in such a way that does not call undue attention to him but makes one realize how important he is to the music. Having seen him play in concert spaces and performance venues, his strength is that he listens, interacts and creates without missing a beat.

On the opening track, "Glass Notes", his interaction with pianist Dan Tepfer gives the piece its tension and release. While bassist Jeremy Stratton anchors the work, the piano and drums stretch, chase and play in an appealing way. That's the hallmark of the entire program - let the music breathe, dig deeply into the melodic, harmonic and rhythmic possibilities and never settle for the ordinary. There may be thousands of versions of Vernon Duke's "Autumn in New York" - here, the trio "swings" the standard with grace, a touch of the blues, extemporizing on the "changes" and only touching on the famous/recognizable melody near the end.
For a young pianist, Tepfer seemingly has no boundaries.

One hears touches of Keith Jarrett and Brad Mehldau on pieces such as "Apocalypso" (such fun) and "Salad Days" but faintly and without resorting to mannerisms or cliches. Schuller's "New Toon" allows the pianist space to develop the melody and expand the harmonies; he does so with fluid lines, two-handed melodic flourishes that move around the tempo and interact with the declarative drum work. It's easy to "get lost" in the
groove of "None Taken", the loping bass lines and the rising piano melody, driven by Schuller's insistent yet not intrusive percussion.

"Life's Little Dramas" is music that invites the listener in and does not let go until the final note. The interplay, the melodies, the dynamic rhythm section and the excellent work of Dan Tepfer will bring you back again and again.


"A terrific album by Brooklyn based composer/drummer George Schuller who manages to combine a certain nostalgia for music of his youth with contemporary compositions.

George Schuller plays with nimble virtuosity and great sensitivity, always supportive of what happens around him."


"You may not know George Schuller but you've probably heard him at one point or another. Schuller comes from a family of jazz musicians (brother Ed and father/legend Gunther). His talent extends across an array of recordings, either as member, producer or writer. He's worked with Joe Lovano, Tony Malaby, Ran Blake, Luciana Souza and one of my favourite groups, Conference Call to name just a mere few. Schuller is a highly versatile and artistic drummer but an even more prolific and masterful composer.

Schuller's recorded discography as leader isn't that long considering his been performing since the early '80s. George Schuller's latest, Life's Little Dramas (Fresh Sound/New Talent) is wonderful example of Schuller's versatility and compositional brilliance. Now I don't own any of George Schuller's material as leader so this was a bit of a revelation for me when I got a copy of Life's Little Dramas. Joined with him are two other exciting and highly skilled musicians in Dan Tepfer (piano) and Jeremy Stratton (bass). Both musicians have stellar recording careers of their own but within Schuller's arrangements they all shine. The number of tracks Life's Little Dramas were written over the span of the last 3 decades and Schuller as he mentions briefly in the notes wanted to readdress them in a different way.

Opening with the Schuller penned "Glass Notes", Tepfer takes center stage with some lovely and dynamic moments throughout. Schuller and Stratton keep a slight yet quietly upbeat tone in the background. Schuller's arrangements are extremely inventive and utilize various chord changes that may not be noticeable to the non-musician (myself included) but they will hit you subtly. One such moment is "House Of Blue Lime", written by Lee Konitz, which Schuller arranges with great beauty and craft. Stratton and Schuller both have exquisite solos during this piece. And I think its Schuller voice (someone correct me if I'm wrong) that can be heard underneath the chords in an almost Keith Jarrett-esque channeling.

Schuller's compositions really do allow the trio to stretch and feel extremely wide and open. The richly diverse "Newtoon" is evidence that Schuller can be complex in his structure while still building a marvelously touching tune. The drums are awash everywhere while Tepfer tenders delicate yet playful chord changes. "Salad Days" is simply a wonderful ballad strangely enough about salad. Stratton again shines with emotive delivery. Schuller message is carried with firm brushes of rhythm while Tepfer delivers story on top.

Life's Little Dramas is compelling, diverse, and filled with energy on multiple levels. It's not drummers record. It's a composer's record. And this composer has delivered a superb document of post bop skill and brought out the best in his trio. I'm hoping these guys get a chance to record again because Life's Little Dramas is a real treat from start to finish."


"Is George Schuller a premier drummer who also composes, or a gifted composer who's also a drummer?

As demonstrated once again in his latest album, "Life's Little Dramas," the answer is that the Brooklyn-based Schuller is both an inventive drummer and composer/arranger.

A veteran of the New York jazz scene as well as a well-known visitor to Connecticut venues, Schuller celebrates his new trio release Friday, March 4, at 8 p.m. at The Buttonwood Tree Performing Arts and Cultural Center, Middletown. Schuller's sidekicks, both on his album on the Fresh Sound New Talent label and at The Buttonwood Tree, are pianist Dan Tepfer and bassist Jeremy Stratton.

In "Life's Little Dramas," Schuller re-examines several of his earlier compositions, plus original arrangements and a couple standards.

Schuller's adept direction, tunes and charts open up the trio format, giving it a three-dimensional perspective with lots of interplay and much time and space allocated to each player.

Right from the opening selection, "Glass Notes," a piece written around the time of the fall of the Berlin Wall, it's apparent that this is a genuine working band. The title is a pun on "glasnost," a policy of then-Soviet leader Mikhail Gorbachev in the 1980s to shed some light on a dark, repressive regime. Here and throughout, Schuller's drumming is an inventive, musical delight.

On "I Will Wait for You," Schuller and his sidekicks spin a gossamer ambience awash with feeling. His lyrical spirit is both complemented and developed by Tepfer and Stratton.

"None Taken," an angular, 7/4 piece Schuller composed for his band, Circle Wide, also is accented by his rhythmic artistry framed in this trio setting. "Apocalypso," which Schuller wrote in his formative Boston years, lights up with a sunny, Caribbean spirit. "House of Blue Lime," a Schuller arrangement constructed around two choruses of a Lee Konitz solo based on the standard, "Limehouse Blues," is another smooth running vehicle.

A reharmonized "Autumn in New York" morphs into a mysterious work, the melody not fully emerging until near the end, yielding shadow and substance. "Newtoon," a recent Schuller composition, is his acknowledgement of his years growing up in Newton, Mass., in a musical family. His father, Gunther Schuller, is the legendary composer-conductor-author. His older brother is Ed Schuller, the noted bassist and composer.

On, "Salad Days," Schuller and his collaborators revisit his old tune, seasoned with a brand new coda. The curtain closes on "Life's Little Dramas" with "Just in Time," a ballad exploring ambiguous meanings below the pretty Green-Styne-Comden surface.

Since co-founding the 12-piece ensemble Orange Then Blue in 1984, Schuller has always marched to the beat of his own drummer.

Never a bender to trends or rigid ideology, he plays in the moment and looks to the future. At the same time, he's aware of the past as something to build on in new ways."