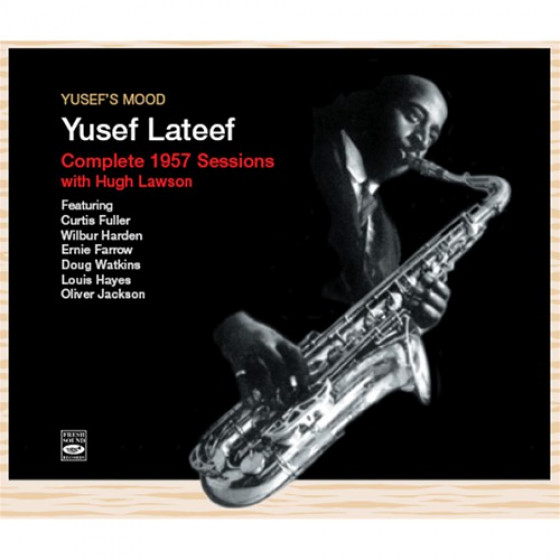 In 1950, after a year on tour with Dizzy Gillespies band, Yusef Lateef returned to Detroit, the city where he had grown up as a jazz musician. With his powerfully preaching tenor sax tone and fluent, driving style he established himself as an influential presence in the Motor City scene, forming his own quintet in 1955. He made his first recordings as a leader in 1957, a productive year for him, as this gripping 4-CD set reveals.

On it he plays tenor and flute with a compelling directness and overpowering honesty, surrounded by a nucleus of Detroiters like Curtis Fuller, Ernie Farrow, Louis Hayes, Oliver Jackson, Wilbur Harden and, especially, Hugh Lawson, whose rolling, two-handed piano is as exciting in solo as it is in his intelligent comping. The entire group plays in inspired fashion, speaking authoritatively for the Detroit jazz scene.

The hardcore of these sessions were recorded by Rudy Van Gelder in Hackensack, New Jersey

This collection includes the following albums:

Note: In addition to the standard jazz instrumentation, some compositions, notably for the time, included several near-Eastern ethnic instruments to produce a remarkable blend of oriental harmonies, sounds and effects, superimposed on wailing jazz without compromising its unity or quality. These include the rebob, earth board, argol, tambourine, Chinese gong, finger cymbals, scraped gourd, bells, and other devices, among them a balloon and a 7-up bottle to achieve some uniquely arresting effects.

More details and information in the booklet

"This massive four-disc set of Yusef Lateef's first recordings as a leader was issued by Spain's Fresh Sound imprint and contains a total of eight different records, all but one recorded under the guidance of engineer Rudy Van Gelder for the Savoy, Verve, and Prestige/New Jazz imprints. Considering he was 37 when he began recording as a leader -- and had served tenures in New York with Hot Lips Page, Roy Eldridge, and Ernie Fields -- Lateef was fully developed as a composer and arranger. His band for these sessions is stellar. His Detroit crew was comprised of monsters even as the band mutated a bit: the original unit featured Lateef with trombonist Curtis Fuller, bassist Ernie Farrow, pianist Hugh Lawson, and drummer Louis Hayes. Changes would take place later in the year: Oliver Jackson replaced Hayes, and flugelhorn boss Wilbur Harden took over the chair vacated by Fuller. In the Lateef vision, these differences were all part of the plan: exploring his passions in uniting African and Asian folk traditions with American music.

Some of the albums included here are now considered legendary sessions. Those include Jazz for the Thinker, Jazz Mood, Before Dawn, and Other Sounds. The other four -- Stable Mates, Jazz and the Sounds of Nature, Prayer to the East, and The Sounds of Yusef -- are no less satisfying. That said, only one of these recordings (Other Sounds,) has remained continually in print during the CD era. While it was not uncommon for recording artists to spend loads of time in the studio (the system was different then than it is now), making records and getting paid in addition to gigging at clubs, eight albums (and part of a ninth) is a lot of work in a year for anyone. This only underscores the depth of commitment Lateef and his collaborators had when it came to exploring new sounds, and incorporating different scalar elements, tonalities, and in Lateef's case, instruments, into the group sound. Lateef alternately plays tenor, flute, argol, scraped gourd, and an Indian reed whistle. While the music perhaps sounded otherworldly at the time, it always swung, no matter how much space was incorporated, no matter the rhythmic structure, melody, and lushly integrated harmonic sensibilities among the musicians, which were part of the core musical architecture. Some of the key tracks here are "Happyology," "Morning,""8540 Twelfth Street," "Taboo," "Love Is Eternal," and the title track to Before Dawn. Check the slightly angular structure at the beginning of "Space," from Jazz Mood: one can hear a gorgeously knotty nod to Thelonious Monk's compositions of the era, but it's all Lateef.

While it is true that sometimes Fresh Sound offerings are lacking in quality, this set, for the most part, is quite good. The sound is requisitely full and warm. A/B'ing from the LPs, it represents quite accurately the range and depth -- especially in the piano and basslines -- what is there. The price is also quite reasonable for such an extensive collection. The booklet contains the liner notes to each of the individual albums, and full session details. This is a fine investment for the jazz fan in general, and essential for those deeply interested in the still futuristic work of Lateef."