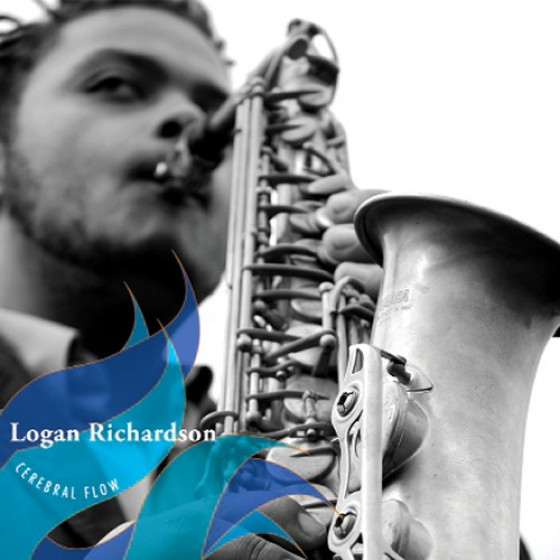 This is a most impressive and ambitious work. Altoist Logan Richardson is sure to capture many ears with this collection of original ideas, unexpected choices, impeccable delivery and phrasing within a very melodious and challenging group environment. Logan possesses a vocal-like flexibility and dexterity unlike any alto saxophonist that Ive witnessed in an alarmingly long time. Explorative, vibrant and full of curiosity, this is a session for the times.

All compositions written by Logan Richardson

"An off beat, a stretched note, a dissonant instrumentthe imperfections which conservatoire music frowns on don't prevent jazz landing artfully on its feet. Saxophonist Logan Richardsons debut album Cerebral Flow eschews the derivative character and high gloss aesthetic of recordings by so many other players of his age, and offers music that is fresh, human and uninhibited. He's accompanied in the main by young players of talent, plus the seasoned drummer Nasheet Waits on half the tunes.

The disc's opener, Turning Maze, begins with a saxophone solo tinged with chamber and free jazz exploration, alongside a heavy groove vamp established by the band. The title track, which follows, is abstract yet melodious. Urban Folk Song contains a flowing guitar solo by Mike Moreno and simultaneous solos from Richardson and vibraphone player Mike Pinto, before concluding with a sweet bass and drums pattern.

The inclusion of both vibraphone and guitar, both well exploited by Richardsons complex and lyrical writing, allows the music to move in interesting directionsAnimated Concept Of Being is marked by active, evolutionary shifts in mood and intensity, while the drum and saxophone duos Like Water and Feel The Blues are complete blow-out numbers, showcasing Richardsons muscularity and post-John Coltrane freedom. Some may be turned off by the adventurous and unpristine sound, but this is fine modern jazz and Richardson is a young cat who we should be hearing more from in the future."

"The label Fresh Sound New Talent is aptly named in regard to the young alto saxophonist it introduces on this recording. Logan Richardson has a fresh sound, accommodating enough to please the adventurous but not so out it cant be enjoyed by general jazz listeners who want to explore new territory. Despite its brainy title, Cerebral Flow is about more than conceptual ideas or even technical virtuosity. Richardsons intriguing compositions and playing convey emotionor maybe its that they provoke feeling in the listener. No doubt the very human voicings of this Kansas City-born reed player have a lot to do with that.

Richardsons ten originals are supported by a band of New York City regulars and consummate listeners who are sensitive to their nuances. Rising young guitarist Mike Moreno performs elegant standout solos on several pieces including In The Wall and Urban Folk Song, and was someone to be counted on throughout a live performance celebrating the CD release at Cornelia Street Café in late April, 2007.

The inventive and masterful Nasheet Waits and the versatile Thomas Crane time-share the drumming chair on the recording; Both have distinctive personalities and playing methods but their efforts seamlessly knit from track to track. Crane pulls out all the stops on Free The Blues and the title track while Waits, with his swirling and rolling tension-producing rhythms, owns the first and last numbers Turning Maze and In The Wall, as well as the arousing drum and saxophone duo Like Water.

At Cornelia Street Café, the first three tunes from the CD began the set but, as befits a live jazz show, there were surprises. Crane ably handled all the drumming with an endless supply of ferociously focused energy. Richardson had many strong solos, including a total blowout on Our Life Together. And two new numbers, the ballad Faith and You Dont Know My Name, the latter finished just days previously and featuring cellist Patrick Petty, were unveiled. The exploratory Richardson continues to seek new ways to express what he hears in his head and these subtly stroked strings added another color to the bands overall sound without overwhelming the interplay of the core group."

Laurel Gross -All About Jazz