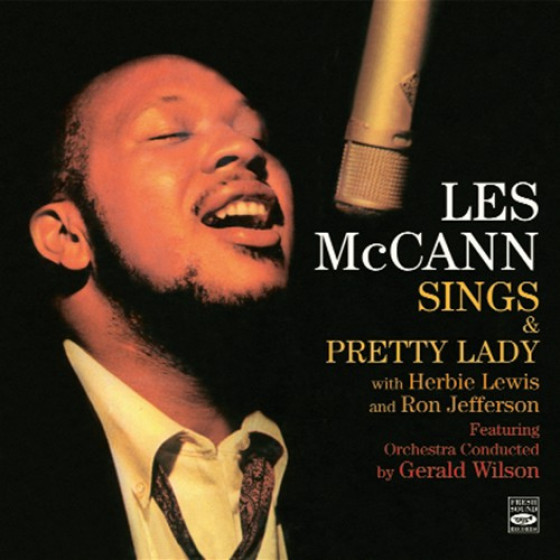 For many, Les McCann Sings, revealed the pianist as a vocalist with something to say which does less than justice to McCann's work here, both vocally and pianistically. Singing with great individuality and warmth, his style combines the direct, emotional, and very communicative with an amazingly florid approach in all kind of moods, but mostly on ballads, as is the case on the lovely Its Way Past Suppertime.

On the trio tracks his piano work matches the good taste of his singing, while the large ensemble tracks are distinguished by the combined musicality of McCann and arranger and conductor Gerald Wilson, who set the arrangements around McCanns ideas, adding his own afterwards. And like all really good singers, McCann has an instinct for which songs suit him. Next Spring was included on the album Sings, but recorded at a Richard Groove Holmes date featuring Ben Webster.

The second album here, the instrumental Pretty Lady, was made around the same time as Sings. Subtitled The Ballad Style of Les McCann, it makes a perfect companion to Sings, both for its overall range and mood and because the trio adopts a more approachable style without compromising its usual soul and groove. Lewis and Jefferson are sensitivity personified and, despite McCanns occasional double-timing, the prevailing mood is a quiet, late-night, reflective one.

(*) Next Spring was included on the album Sings but recorded at a Richard Groove Holmes date.

"Les McCann Sings & Pretty Lady (Fresh Sound 757) start off with the first full album on which McCann was featured as a singing pianist. He would become much better known as a singer after 1968's "Compared To What" and at this early stage he was more distinctive as an instrumentalist than as a vocalist. That said, he does a fine job on 11 numbers (mostly standards) in which he is joined by Herbie Lewis, Ron Jefferson and an orchestra arranged and conducted by Gerald Wilson.

There is also a bonus vocal from a date with Ben Webster. The second half of this CD is the instrumental trio set Pretty Lady which is typically soulful and melodic. It is of little surprise that Les McCann was so popular and recorded so prolifically during the early 1960s."