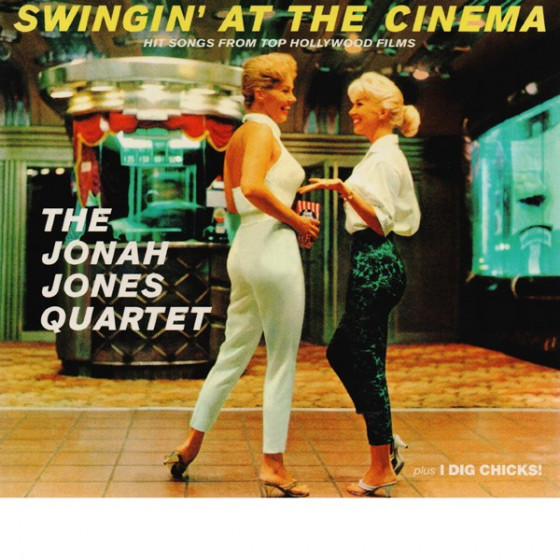 
Jonah Jones zoomed to popularity in the late 50s. He found a successful formula and used it to brighten the hit charts with a succession of bouncy albums on Capitol Records. His quartet was one of the three newcomers in the Top 10 wide variety of small groups listed in the favorite Instrumental Billboard lists in 1958.

On this set Jonah Jones rides on top of an excellent rhythm section to blow very good muted and open horn on Swingin at the Cinema, a tribute to his considerable versatility and awesome courage to swing such masterworks as the 'Colonel Bogey March' or 'True Love.' Jones sets the pace for this package with I Dig Chicks!, which he chants to good effect. The group as usual swings in a commercial groove...

For his efforts in the Capitol album I Dig Chicks!, Jones received a Grammy for Best Jazz Performance by an Orchestra.

"At 46, Jones' days of glory with Lunceford, Stuff Smith, and Cab Calloway must have seemed behind him when, in '55 he was booked at the Embers in New York. However, his light touch, muted trumpet and the occasional shuffle backing, proved a winning formula, with hits through to the early '60's. Those seeking a virtuosic performance may be disappointed. Recorded in '58 while signed to Capitol, this is commercial and somewhat eclectic stuff. He rarely stretches out, soloing for one chorus on most numbers, but as the liner notes say, it swings in a commercial groove and his swinging, fun style, elaborate glissandos, lip trills and vibrato inject both recordings with an infectious energy. Numbers like Gal in Calico and Colonel Bogey are full of life and though he was no Sinatra, his vocals are well worth hearing.

All in all, this is a cheerful offering and provides a fine lesson on how to simply swing a tune."

(*) Ben Cummings has been much admired for his work with a variety of bands. Now he has stepped into the shoes of a fine British trumpeter who, like Jonah Jones, achieved mainstream popularity Kenny Ball.

-Swingin at the Cinema

"One in a lengthy series of Capitol albums by trumpeter/vocalist Jonah Jones and his quartet (there were five in 1958 alone), this set finds Jones looking for gold by performing a dozen numbers that originally debuted in Hollywood movies. There were no hits this time around, but the LP sold fairly well. Jones, joined by pianist George Rhodes, bassist John Brown and drummer Harold Austin, uplifts such tunes as "True Love," "Colonel Bogey March," "Three Coins In the Fountain" and "Lullaby of Broadway."

"The cover of this LP gives males three good reasons to "dig chicks." Trumpeter/vocalist Jonah Jones continues his "swinging with a shuffle" formula, performing 11 songs named after women, plus the title cut (which has one of his six vocals of the date). Jones, pianist Teddy Brannon, bassist John Brown and drummer George Foster have a good time romping on such numbers as "Mandy, Make Up Your Mind," "Tangerine," "Blue Lou," "Rosetta" and some lesser-known tunes. The overall results may be a bit lightweight and predictable, but the trumpeter gives this album enough exciting moments to make it worth getting."