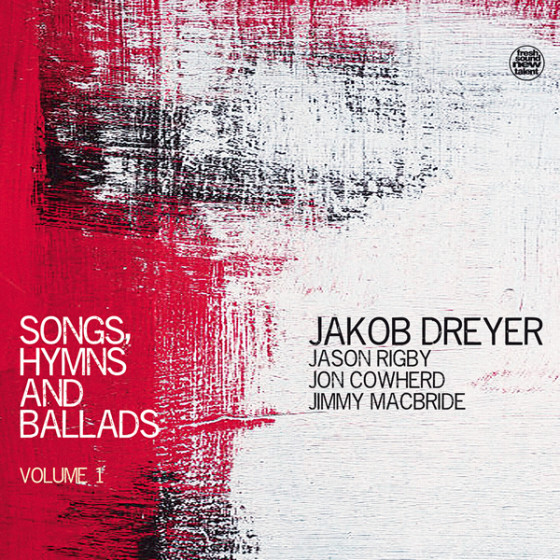 The two volumes of Songs, Hymns and Ballads, Jakob Dreyer’s recording debuts as a leader, came about when the bassist became determined to record some of the many songs that he has written but never documented.

“In New York, I have met many musicians. I particularly love the playing of the great musicians who are on this recording. Each one has their own musical personality. They learned my songs very quickly and recorded all of the music for the two CDs in just two days.”

Tenor-saxophonist Jason Rigby has his own sound and the ability to play both chordal-based jazz and in freer settings. He has led albums for Fresh Sound (Translucent Space, The Sage, and One) and has headed several groups of creative artists. Pianist Jon Cowherd, who also started out playing trumpet, French horn, and violin, co-founded the Brian Blade Fellowship, has worked as a record producer, led albums (Mercy and Gateway), and worked with everyone from George Gee’s swing band to Cassandra Wilson and Lizz Wright. Drummer Jimmy Macbride has an extensive resume which includes recordings with Roxy Coss, Chad Lefkowitz-Brown, Nick Finzer, and Lucas Pino’s No Net Nonet.

Songs, Hymns and Ballads Vol. 1 consists of eight Dreyer compositions, some of which were written when he lived in Europe. The pieces feature original chord changes, themes that are often haunting, and relaxed yet inventive playing. The opener, “Milchstrasse,” is named after a street in Hamburg. The medium-tempo jazz waltz is a fine showcase for each of the musicians. Rigby’s combination of a light tone with an explorative style is a little reminiscent of Joe Lovano. Cowherd begins his solo by building off of Rigby’s closing phrase, launching an original statement of his own. The leader displays a large tone during his solo and Macbride, who always keeps the momentum going throughout the program, gets a few drum breaks near the performance’s conclusion.

“Gothamburg,” which is dedicated to a city in Sweden, has a seven-note phrase that is played by Rigby in several different ways, leading to inventive bass, piano and drums solos. The thoughtful “Legrand” inspires lyrical improvisations from Cowherd and Dreyer while the uptempo cooker “Epistermology” (a term from philosophy that examines the relationship between justified beliefs, knowledge, and opinions) generates a lot of heat. The explosive piano, tenor and bass improvisations plus the tradeoffs with Macbride give one the atmosphere of an exciting jam session.

“J-Song” has a simple childlike melody and a light catchy rhythmic pattern that inspires fine bass, piano and tenor solos. The ballad of the set, “Seneca Village” has quietly emotional playing by Dreyer and Rigby. The medium-tempo “Kaspar,” which gives each of the musicians an opportunity to make statements, has particularly attractive chord changes; Macbride uses space quite effectively in his solo. Songs, Hymns and Ballads Vol. 1 concludes with “The Cure,” a piece with a wistful theme that is a feature for the leader that one could imagine the Miles Davis Quintet of 1967 performing.

Songs, Hymns and Ballads Vol. 1 is an impressive debut for Jakob Dreyer as a leader. It deserves an encore and fortunately gets one. The equally enjoyable Vol. 2 will certainly satisfy those who want to hear more from the talented bassist-composer.

—Scott Yanow, jazz historian and author of 12 books including
"Life Through The Eyes Of A Jazz Journalist"

All compositions by Jakob Dreyer